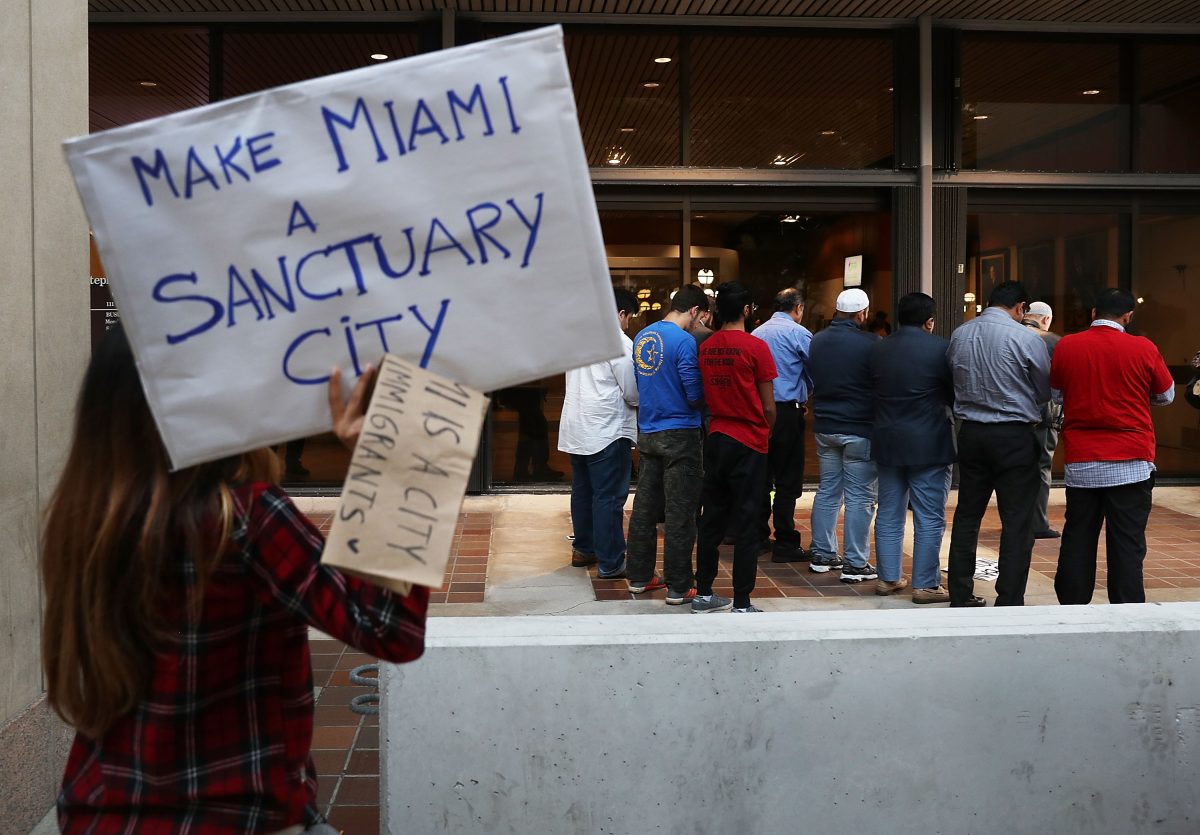 Men from the Islamic School of Miami pray together as they attend a protest against Miami-Dade Mayor Carlos Gimenez's decision to abide by President Donald Trump's order to effectively abandon the county's stance as a "sanctuary" for undocumented immigrants, outside the Stephen P. Clark Center Government Center on January 31, 2017 in Miami, Florida. (Photo by Joe Raedle/Getty Images)

Citing that a January 2017 immigration detainer directive by Miami-Dade County Mayor Carlos Giménez “unlawfully violates the prohibition against unlawful seizures under the Fourth Amendment to the U.S. Constitution,” the University of Miami School of Law’s Immigration Clinic filed a federal lawsuit in the name of a 18-year-old United States citizen who was detained until his status was determined, according to a media release published on Wednesday.

The lawsuit, which was also joined by American Civil Liberties Union of Florida and the law firm of Kurzban, Kurzban, Weinger, Tetzeli & Pratt, P.A, “challenges Miami-Dade County’s policy of detaining people beyond the end of their criminal custody solely for a suspected civil immigration violation,” the release stated.

The suit is seeking monetary damages from asks Miami-Dade County and Mayor Giménez. It lists Garland Creedle as the Plantiff. According to the release, Creedle “was jailed at Turner Guilford Knight Correctional Center after police arrested him after an alleged domestic dispute. Creedle paid his bond shortly after he was arrested, but county jail officials failed to release him and instead held him for immigration officials. No criminal charges were ever filed in court against Creedle.”

Creedle, the release stated, was “born in Honduras to a U.S. citizen father and has been a U.S. citizen since birth.” The release also said that immigration officials have know about Creedle’s citizenship status since 2015.

“The Mayor and County Commissioners failed to listen to our community’s overwhelming opposition to this immigration jail policy,” said Rebecca Sharpless, attorney for Garland Creedle and director of Miami Law’s Immigration Clinic. “Mixing our local criminal justice system with federal immigration enforcement is not only bad policy, it is illegal. We are all now paying the price.”

The release noted that “Miami-Dade County has been detaining people in jail for federal immigration enforcement officials ever since President Trump threatened in January to cut off funding for cities deemed ‘sanctuary cities.’ After the County Commissioners voted in February to collaborate with immigration authorities, however, the Trump Administration clarified that only cities that violate federal law would be at risk of losing federal money. Although the County no longer faces loss of federal funding, it has not reconsidered it policy on immigration detainers.”

This is the full lawsuit: