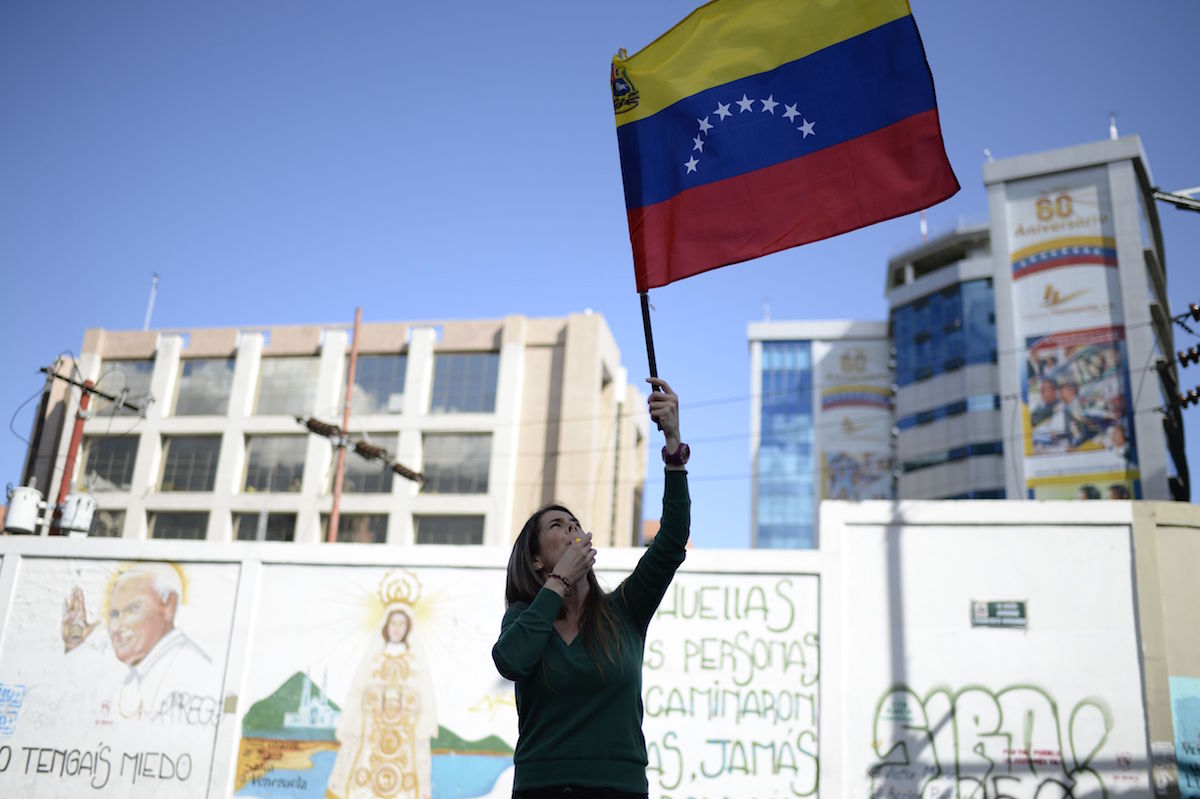 An opposition activist raises a national flag during an anti-government protest in Caracas on July 4, 2017. (FEDERICO PARRA/AFP/Getty Images)

Daily marches against the government of Nicolás Maduro are in their fourth month, with people marching daily on the streets of Caracas, Maracaibo, San Cristóbal, Valencia and many other cities.

Dressed in tee shirts and red-blue-and-yellow hats or shrouded in the tricolor Venezuelan flag, young people, women and retirees demonstrate by the thousands, carrying signs saying “Don’t shoot!” and shouting Sí se puede, sí se puede, “Our weapon is the constitution!” and “Who are we? Venezuela! What do we want? Freedom!”

At least 90 people —including passers-by and security forces— have died in the daily exercises of democratic participation that began in April. Among the dead are a 17-year-old protester shot in mid-June and a 25-year-old man killed July 4 in Tariba.

Once called la generación dormida –“the asleep generation”– Venezuelans born in the prosperous, democratic 1980s are now very much awake. As living conditions shift from precarious to intolerable, they face a critical decision: do they stay or do they go?

Since at least 2013 when Maduro was elected, the country has been a laboratory for bad public policy.

Following the implosion of “21st-century Socialism”, the 15-year-old economic, social and political system established by Hugo Chávez, the current administration has proven itself inept at economic management but adept at polarizing society, exacerbating violence and truncating the dreams of its population.

Many thousands have fled Venezuela, seeking a better life. Venezuela does not publicly circulate emigration information, but estimates suggest that between 700,000 and two million Venezuelans have emigrated since 1999. That leaves the majority of Venezuela’s 31 million people in country, either by choice or by necessity.

Now they are fighting for the future of their country, marching every day, despite knowing that this government is trying to silence dissidence through excessive use of force.

Young professionals go to work every day (if they still have jobs) to put food on the table and plan for what will follow the “pacted transition” that many see as the most likely way out of the current chaos.

The Aspirations of Venezuelan Youth

Emigration was on my mind in 2016 when I conducted research on my own students, interviewing 360 students from nine different university departments, ranging from engineering to medicine, who would graduate from the Central University of Venezuela (UCV) in the 2017-2018 academic year.

The anonymous survey, which was circulated on social media and via professors, asked these young Venezuelans about their individual well-being, post-college plans and whether they intended to emigrate.

The final report, The Individual Aspirations and International Migration Options of Students in Venezuela’s Central University, will be published in Spanish in July 2017 in the journal La Revista Educación Superior y Sociedad.

My results indicate that 65% of the students are not living the life they’d like to lead, do not believe that their life circumstances are good and they are not satisfied with their current situation.

Perhaps surprisingly for people of this age, 100% said they know what they want in the future and have a life plan in mind. If they cannot achieve it, 90% said they would leave Venezuela, the vast majority of them doing so to escape the country’s terrible psychosocial climate and its political polarization.

One 23-year-old male law student, scheduled to graduate in 2018, said “one can’t live without hope…going hungry, with a miserable salary, as the money that should go to us is given to other countries while we are left without protection.”

A 22-year-old female science student, also from the class of 2018, said, “The crime and economic limitations affect me considerably…living like this does not fulfill my expectations.”

These findings differ enormously from a survey done just a few years ago. When the Ministry of Youth did its annual survey of young people in 2013, only 23% of young people wanted to leave Venezuela.

Tellingly, no new results have been published since 2013. One can only assume that either this government survey has not been done since, or that (unfavorable) results have not been publicized.

In 2014, the Institute for Economic and Social Research at the Andres Bello Catholic University was looking into the democratic participation of Venezuela’s youth. Researchers then found that 27% of those interviewed had considered emigrating at some point, primarily to improve their economic situation or further their studies.

Today, my survey and the (admittedly impossible-to-confirm) figures on Venezuelan immigration and asylum-seekers indicate that the majority of young people now want to leave the country.

So why are so many of them still here?

Many who’ve stayed are fighting for the future of their nation. Those who face rubber bullets and tear gas every day are marching for the ones who have left, for the disillusioned true believers of this political project, for the defrauded and the hungry and those tormented by poverty.

As the prominent Venezuelan thinker Moises Naim wrote in El País on May 13, “the list of the Chávez regime’s failures is long, and Venezuelans know it; 90% of the population repudiates Maduro.”

There are practical limits to pulling up stakes, too. Not everyone who wants to emigrate has the means to do so or somewhere to go.

My study showed that the youth of Venezuela consider leaving because they see that the opportunities to live, work and achieve their dreams at home have become scarce. Their chances of living a good and fulfilling life, they think, are better abroad.

As the columnist Carlos Jesús Rivas Pérez wrote in a controversial June 2016 article, “For those who want to leave Venezuela–just leave! But you’re going without a degree.”

The Venezuelans who’ve remained —young and old, men and women— march for the country they once knew and the things they no longer have, protesting Venezuela’s social and economic unravelling and digging deep into their right to protest, assemble and express themselves.