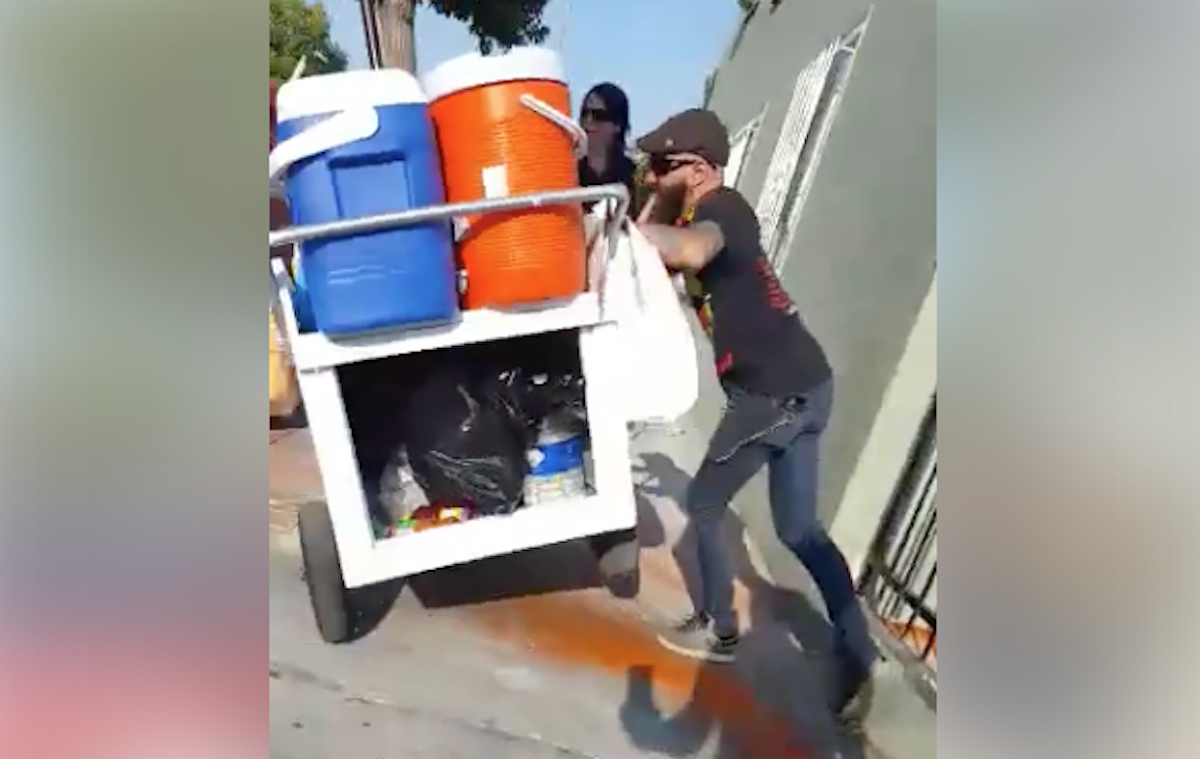 Screen grab from the viral video.

A Hollywood street vendor was attacked and a recording of the incident has gone viral since being posted Monday. Benjamin Ramirez sells elotes (corn) and was doing his job when he was approached by a woman and a man with a dog. In the video, the man, wearing sunglasses and a hat, confronts Ramirez and tells him in Spanish to move his food cart. The man exchanges some words with Ramirez before he pushes Ramirez’ cart to the ground, dumping corn, chicharrones and two coolers onto the street. The woman then tells Ramirez to “stay away,” adding in an expletive into her warning.

“I’m recording this because this racist threw my things,” the 24-year-old vendor says in the video. The man replies, “I’m not racist. I’m Argentinian,” and then proceeds to berate the vendor. The video, which was recorded by Ramirez, has been seen 4.6 million times at its original Facebook post at time of publication.

In an update posted Tuesday, Ramirez says the same man has repeatedly harassed him and previously approached him with a stun gun.

A GoFundMe page was set up to partially reimburse Ramirez for the food, his equipment, loss of work and wages, and will also go to “help vendors in similar situations,” said Azusena Favela, creator of the fundraising page.

“Every day street vendors run the risk of being attacked. Most times, they are targeted by the L.A. County Health Department and LAPD but sometimes its individuals full of hate,” Favela wrote on the GoFundMe page.

Ramirez and his family have approved of the fundraising page according to Favela. As of Tuesday, they have raised over $4,000.

Los Angeles recently lowered street vending from a misdemeanor to a citation.  The City Council said it made that decision amid stepped-up federal immigration enforcement, noting that it did not want anyone deported for selling food on the streets. There are an estimated 50,000 street vendors in L.A. But advocates, including Favela, still call on the city to create a permitting system to protect vendors like Ramirez.

The motivation behind the attack on Ramirez is unknown. The Los Angeles Police Department told the Los Angeles Times that they are looking into the matter and that the man has not been identified. Ramirez says he knows who the attacker is, and many L.A.-based profiles who have been following the story on social media have said that his name is Carlos Hakas.

A march and rally in response to the attack is planned for Thursday in Hollywood. Organizers said the event is meant to support Ramirez “and all street vendors who are constantly harassed by the police, sheriffs and racists like the one that we have all seen in the video.”