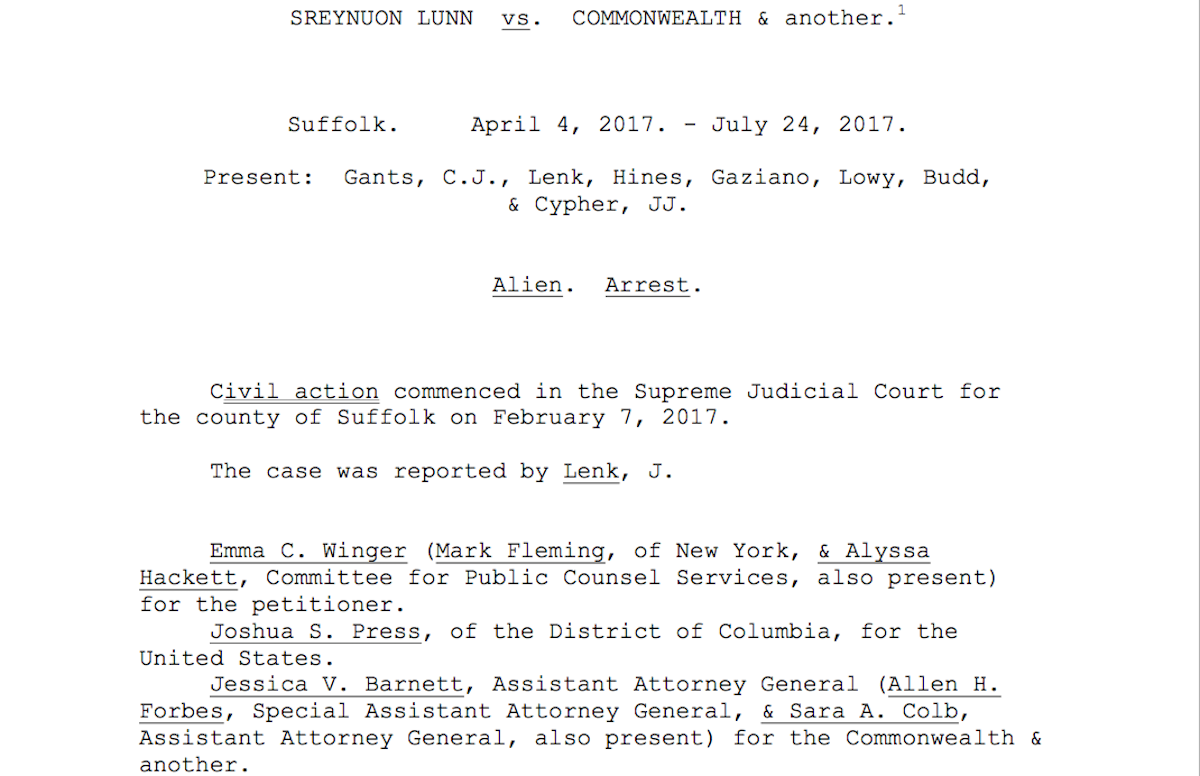 Citing that immigration removals are civil proceedings and not criminal offenses, a Monday ruling by Massachusetts’ Supreme Judicial Court said that local law enforcement officials do not have to honor certain U.S. Immigration and Customs Enforcement (ICE) immigration detainers.

The ruling (posted below) contained several examples of how immigration law and immigration removal proceedings are interpreted by state and federal courts, including the United States Supreme Court.

For example, when discussing the Immigration and Nationality Act, the court’s ruling said that “Some violations of the act are criminal offenses. It is a crime, for example —punishable as a misdemeanor for the first offense— for an alien to enter the country illegally,” but later said that “Many violations of the act are not criminal offenses. Being present in the country illegally, for example, is not by itself a crime. Illegal presence without more is only a civil violation of the act that subjects the individual to possible removal.”

With that said, the court explained that “Significantly, the administrative proceedings brought by Federal immigration authorities to remove individuals from the country are civil proceedings, not criminal prosecutions.” As a result, according to Massachusetts, certain detainers that ICE sends to local law enforcement are civil requests, and because law enforcement only deals with criminal cases, it can ignore these detainers:

Immigration detainers like the one used in this case, for the purpose of that process, are therefore strictly civil in nature. The removal process is not a criminal prosecution. The detainers are not criminal detainers or criminal arrest warrants. They do not charge anyone with a crime, indicate that anyone has been charged with a crime, or ask that anyone be detained in order that he or she can be prosecuted for a crime. Detainers like this are used to detain individuals because the Federal authorities believe that they are civilly removable from the country.

It is undisputed in this case that holding someone in circumstances like this, against his or her will, constitutes an arrest under Massachusetts law. The question before us, therefore, is whether Massachusetts court officers have the authority to arrest someone at the request of Federal immigration authorities, pursuant to a civil immigration detainer, solely because the Federal authorities believe the person is subject to civil removal. There is no Federal statute that confers on State officers the power to make this kind of an arrest. The question we must answer is whether the State law of Massachusetts authorizes such an arrest. To answer the question, we must look to the long-standing common law of the Commonwealth and to the statutes enacted by our Legislature. Having done so, we conclude that nothing in the statutes or common law of Massachusetts authorizes court officers to make a civil arrest in these circumstances.

The only way this would change is if the Massachusetts Legislature changes state immigration law. The ruling, as expected, was celebrated by immigration rights advocates and criticized by ICE.

According to The Boston Globe, Boston’s ICE director said it “weakens local law enforcement agencies’ ability to protect their communities.”

This is the full ruling: