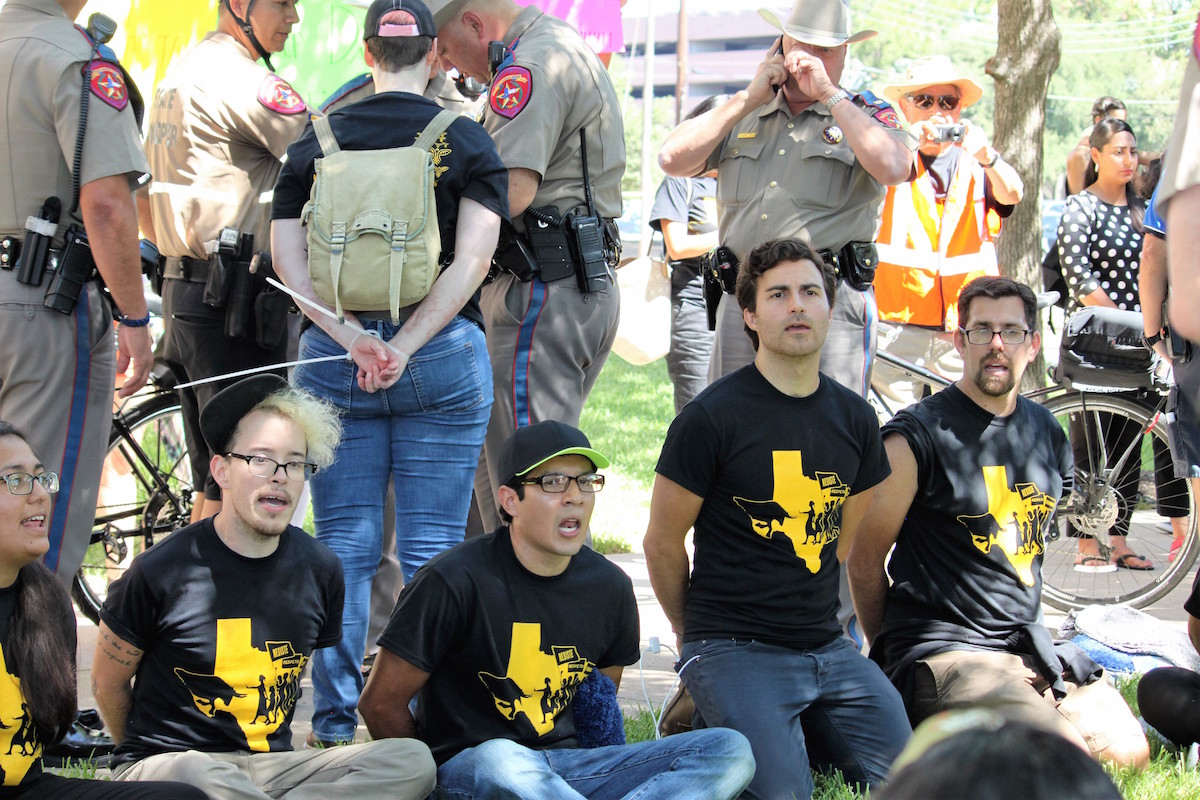 Four of 15 participants continue to chant why they took part in the sit-in shortly after being handcuffed with zip handcuffs in Austin on Wednesday morning. (Photo by Photo by Christine Bolaños for Latino USA)

Update, July, 27, 2017: Organizers confirmed that the arrested individuals have been released.

With support from Cosecha Texas, a nonviolent movement advocating for the rights of all immigrants in the United States, the 15 participants staged a sit-in for two reasons: to protest a proposed repeal of DACA and to speak out against Texas Senate Bill 4, which becomes law on September 1.

The organized action began with a march from the Texas Attorney General’s office to the intersection that included pro-immigrant rights chants and songs, a host of political signs including a large banner that read “Outraged and Unafraid,” and Cosecha’s black and yellow T-shirts. Local law enforcement rerouted traffic while drivers honked their horns for about 20 minutes before the activists were arrested.

“When I first heard about Texas leading other states in a lawsuit to repeal DACA my first thought was, ‘This is going to affect me directly,’” said participant Catalina Adorno, who was eventually arrested. The Mexican native lived in New Jersey for 17 years before moving to San Antonio in June to join the Cosecha movement as a full-time volunteer.

Adorno earned her graduate degree in secondary science education in May and decided to put a halt to her career plans to take part in what she considers a continuation of the fight against Arizona’s 2010 “show me your papers” law. The difference now, she said, is the battleground is on Texas soil.

Adorno said DACA afforded her a work permit and a social security number. The program gave her a sense of relief but she was never at rest knowing her parents didn’t have the same opportunity.

“I want something that’s not temporary and will offer protection to all immigrants,” she said. “That’s what led me to participate in civil disobedience today.”

Adorno knew the risks associated with the sit-in but, she, like all other participants spoke with their lawyers about their rights and potential consequences before taking part.

“It’s part of my responsibility to fight for my parents and my community,” she said. “I hope this inspires those who are living in fear or in the shadows to come together and fight back.”

The arrested individuals were being transferred to the Travis County Sheriff’s Office shortly before noon on Wednesday.

Cosecha spokespeople said they did not expect the Sheriff’s Office to hand over any of the arrested individuals to U.S. Immigration and Customs Enforcement (ICE). Travis County Sheriff Sally Hernandez has come under fire this year for her pro-immigrant stance from Texas lawmakers. Hernandez most recently faced scrutiny earlier this month after ICE said she failed to honor a federal detainer of a known gang member.

“We picked Austin, Texas, because it is kind of becoming the epicenter of a lot of pain to the immigrant community,” said Maria Fernanda Cabello, a volunteer organizer for Cosecha and a DACA recipient.

A Mexican native who grew up in Houston, Cabello said five Texans were among those detained, while the rest came from all over the United States to take part in the sit-in. States represented included New Jersey, Florida, Michigan, Louisiana, Massachusetts, Minnesota, Kansas, Virginia and New York.

“We’re not here to talk to the governor or attorney general,” Cabello said. “We’re calling on the community. The only reason we won DACA was by fighting and having these kinds of actions.”

She said she wants Latinos to ensure the rest of the country acknowledges the economic and labor power of the immigrant community.

“DACA is great but it doesn’t cover all workers in the country,” Cabello said. “We need to keep fighting and not wait for politicians to do something.”