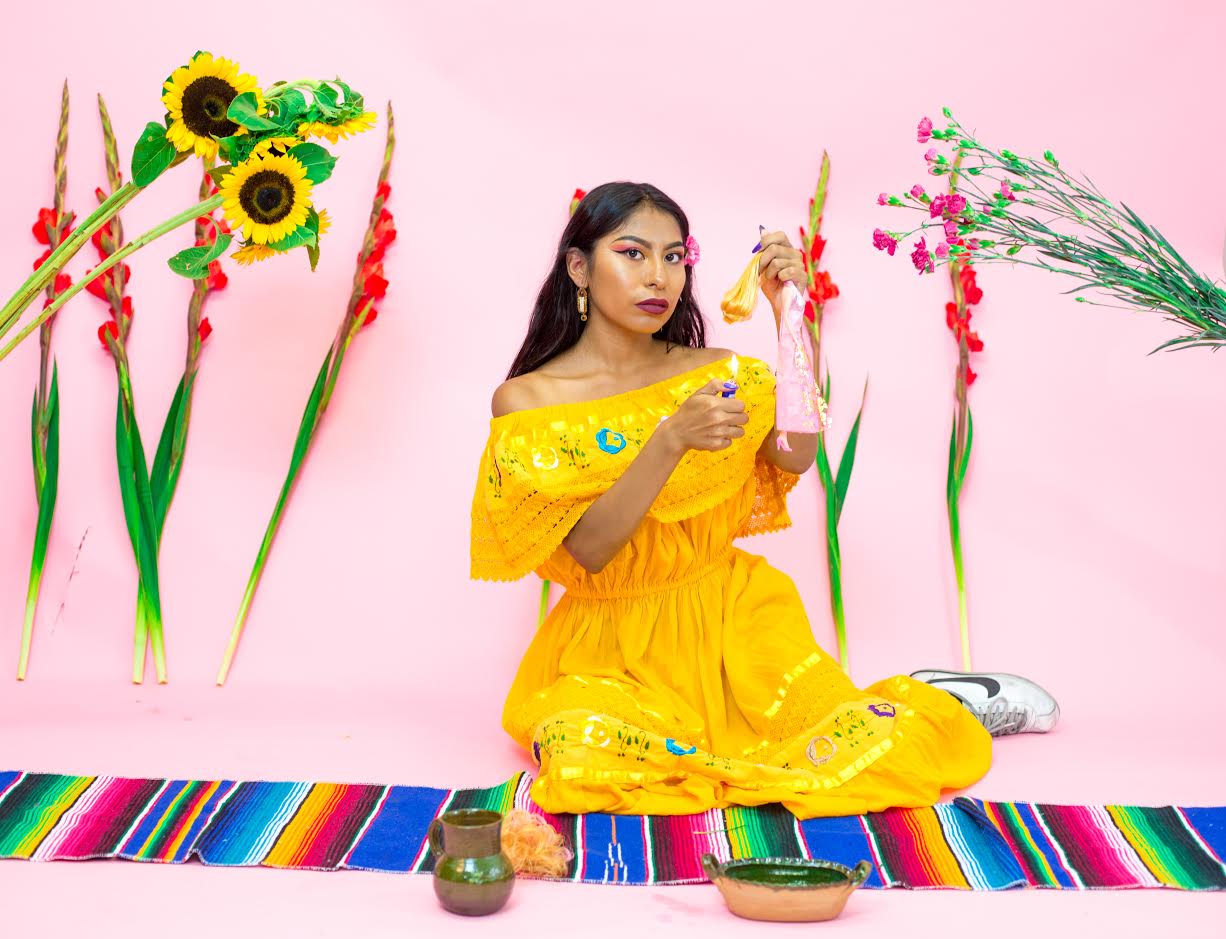 Whether it is tall or short, dark skin or light skin, skinny or fat, diversity in appearances has created a beauty hierarchy in the United States, and mass media has always played a huge role in forming it. For instance, according to the YWCA Report: Beauty at Any Cost, “one study found that only 30 minutes of TV programming and advertising can change the way a young woman perceives the shape of her body.”

The unattainable standards of perfection shown in TV programming, magazines and even Barbie dolls were some of the reasons why 21-year-old Zuly Garcia decided to break down beauty norms with her photography project, “Flores Políticos” (Political Flowers).  The project’s goal is to dismantle the beauty standards that Garcia felt pressured to be a part of growing up.

Garcia’s mother is from Oaxaca, a southern state in Mexico, known for its indigenous people (primarily the Zapotecs and Mixtecs), native cultures and craft.

“Oaxaca is full of tradition and culture. The indigenous women interweave silky ribbons in their braided hair, and dress in traditional clothing with embroidery that they do by hand,” Garcia told Latino USA. But although Garcia describes Oaxacan culture rich in charm and full of indigenous traditions, she noticed as she growing up, a deep-rooted negativity that Oaxacan people had towards their facial features, and body image.

“My mother preferred the lighter skin tones, colored eyes and skinny girls. She always placed me in an environment where I would be forced to assimilate into American beauty standards,” the native Angeleno said. “I grew up very hateful with myself, so I decided to open up a conversation through my photography and art.”

Before she began her project, Garcia found A Women of Color Art Show: The Politics of Womanhood, an art show in Los Angeles that featured experiences from women of color, through Facebook. She applied to be a part of the show and it became the perfect avenue for the “Flores Políticos” project to flourish.

The models in Garcia’s photographs are dressed in Oaxacan indigenous clothing —their makeup highlights their brown-caramelized skin tones— and each photograph includes meaningful objects, such as colorful flowers, that remind Garcia of Oaxacan culture or broken Barbies to signify the rejection of American beauty ideals.

“Our society right now allows us to really hold on to our culture and embrace it. I can easily share it on social media and get responses,” Garcia said.

Her photography draws a connection between her cultural roots, feminism and pop culture. “I want to represent people from all over the world who were told that they could not fit in today’s beauty norms,” Garcia said.

Recently, Garcia shared one of the “Flores Políticos” images of a woman in a yellow off-the-shoulder Oaxacan dress. It was widely shared on Instagram and Twitter and at the time of publication, it has received over 24,000 likes and has been shared 11,000 times. Even actress Diane Guerrero  (Orange Is the New Black) felt compelled to share her post.

#Repost @undocumedia ・・・ ???? Repost @moneyca: “I am not blonde, I am not light skinned, I don’t have colored eyes, I don’t have big breasts, I am not tall with gorgeous legs and my nose is not thin and pointed. But I DO have caramel brown skin that tans beautifully in the summer and I DO have big brown eyes that let me see the world in a completely different way and I DO have long brown hair and a curved nose that remind me of my indigenous roots. So fuck the Barbie ideals, take your European features away from me, I won’t be your pretty doll who’ll you’ll then shape into a housewife. I am brown, I am resilient, I am beautiful. Check out my girl @zulydelarose exhibition at “Politics of Womenhood” ! It explores what it means to be a woman where you redefine stereotypes and expectations. I have the ticket link in my bio! (21+) She is a beautiful soul and I would like to thank her so much for allowing me to be a part of it, I love you from one Oaxacan sister to another ?” #beautiful #Oaxaca #Mexico

Humbled by all the social media attention, Garcia hopes that once the “Flores Políticos” project ends, more women will feel included and that the conversation about beauty standards continues.