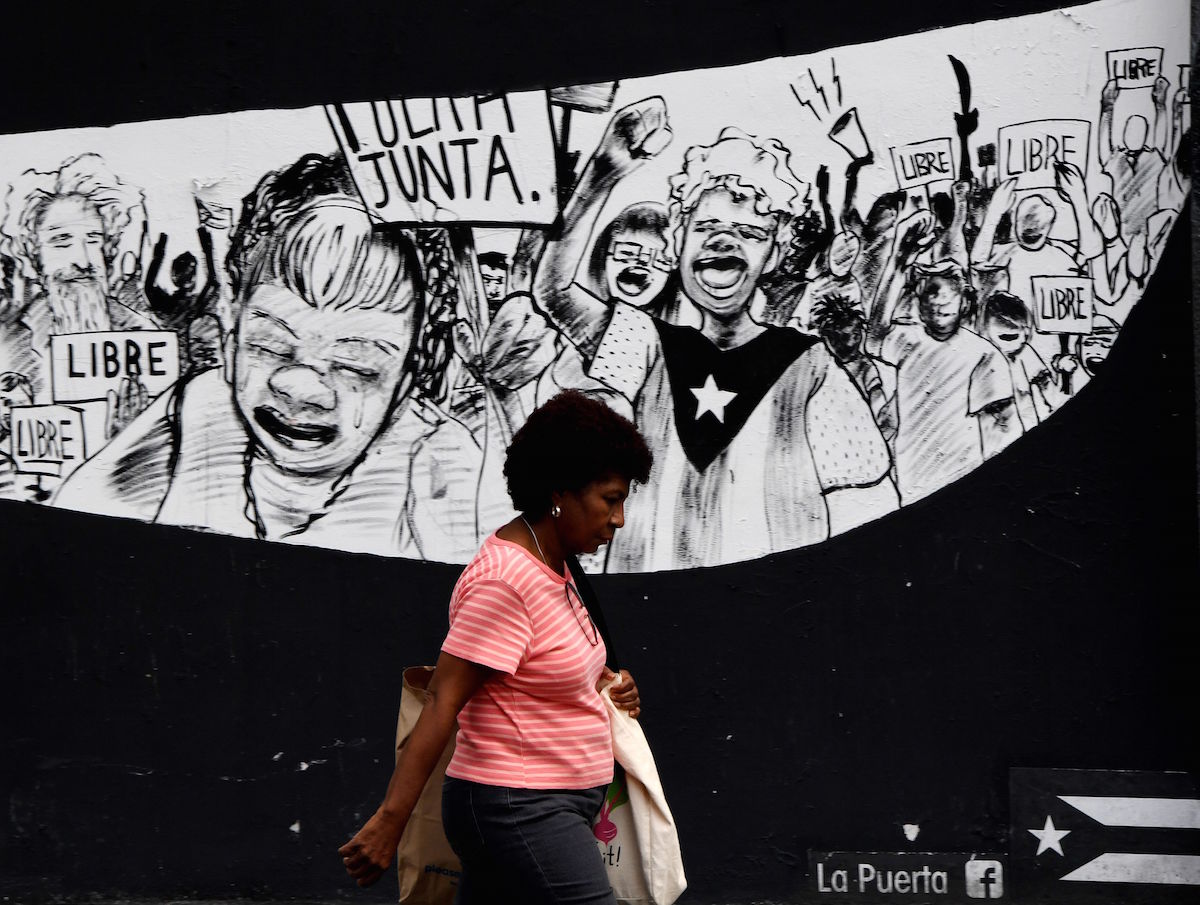 A Puerto Rican woman walsk past protest murals on May 16, 2017 in San Juan. (MARK RALSTON/AFP/Getty Images)

A year ago, Congress cobbled together a plan to try to save Puerto Rico from its US$123 billion debt and pension crisis without costing American taxpayers a penny.

The law, signed by former President Barack Obama on June 30, 2016, effectively steered Puerto Rico into bankruptcy-like proceedings in federal court to prevent a massive default, while saddling the commmonwealth with an oversight board to ensure it put its fiscal house in order.

Though the vote was bipartisan, critics called it a “Band-Aid” that would do little to solve Puerto Rico’s core problems: unsustainable debt that has kept the country mired in recession for almost a dozen years. As Democratic Sen. Bob Menendez, the plan’s fiercest foe, put it:

“Mark my words: if we don’t seize this opportunity to address this crisis in a meaningful way, we’ll be right back here in a year from now picking up the pieces.”

So a year later, have his words proven prescient? Or has the law – known by the acronym PROMESA – lived up to its promise to “create the necessary foundation for economic growth and to restore opportunity to the people of Puerto Rico”?

The Financial Oversight and Management Board that Congress established to manage Puerto Rico’s finances released its first progress report on July 31. At Hunter College’s Center for Puerto Rican Studies, we’ve also been keeping score, as well as tracking the human side of the crisis.

Before Congress passed the Puerto Rico Oversight, Management and Economic Stability Act (PROMESA), the Caribbean island —located about 1,000 miles southeast of Miami– had run out of options.

The end of a federal tax exemption for U.S. companies to build factories in Puerto Rico precipitated the crisis, while the global financial meltdown in 2008 made it a whole lot worse. Shut out of the credit markets after its debt was downgraded to “junk,” a government default loomed.

While U.S. municipalities can declare bankruptcy via Chapter 9, Congress in 1984 excluded Puerto Rico from seeking its relief for reasons that still elude most analysts, including me.

But with PROMESA, Puerto Rico got the breathing room for debt restructuring it so desperately needed. To judge the law’s effectiveness, however, we must determine how far it’s come in resolving the commonwealth’s three key problems: too much debt, a budget that bleeds red and —most importantly— jump-starting a battered economy.

A Mountain of Debt

One of the primary goals of PROMESA was to steer negotiations with creditors and eventually lead to a restructuring of $74 billion in crushing debt and $49 billion in unfunded pension obligations.

In May, Puerto Rico formally filed for bankruptcy under the special court process PROMESA created, the first time a U.S. state or territory has done so. This will allow the island to significantly reduce how much it must pay its creditors – such as mutual funds, hedge funds and individual Puerto Ricans and Americans—and retirees to whom it owes pensions. Ultimately, a New York federal judge will determine who gets what.

Puerto Rico will also have to fend off several lawsuits filed by creditors and bond insurers, some of which allege the debt-cutting plans violate the U.S. Constitution.

The seven-member Financial Oversight and Management Board should be commended for being sensible toward the need to restructure the island’s unsustainable debt levels. That process, so far, is working as intended but is far from conclusive.

That brings us to fiscal policy and the budget.

In October 2016, the Financial Oversight and Management Board revealed that Puerto Rico faced a $67.5 billion budget gap through 2026. In March, it approved a plan submitted by Gov. Ricardo Rosselló to narrow the gap by about $40 billion over a decade by, among other things, cutting health care, reducing certain pension benefits by 10 percent and putting government employees on furlough.

Simply put, punishing austerity seems unavoidable, particularly as the population continues to decline, which makes the fiscal problem worse by reducing tax revenue. About 500,000 people have left the island since the crisis began, according to my center’s research.

That’s because austerity is already sinking deep into the lives of Puerto Ricans. Funding to schools, hospitals and other essential services has been severely cut, more than 150 schools have closed and teachers, doctors and scientists are part of the island’s exodus heading for the mainland.

The plan also calls for a sharp drop in debt payments to creditors —to about 25 cents on the dollar— until the bankruptcy court rules on final amounts. Yet, despite progress on debt restructuring, the Financial Oversight and Management Board has become the face of austerity. Public opinion, at times hopeful, has given way to a growing chorus of voices against austerity, protests and other forms of resistance to the undemocratic nature of the Financial Oversight and Management Board.

The Bigger Challenge: Growing the Economy

Unfortunately, the fiscal plan’s austerity will make it harder to achieve the most important goal: sustainable economic growth.

Puerto Rico has endured a debilitating economic recession since 2006, the year the tax incentive for U.S. companies ended, driving unemployment as high as 17 percent (it’s currently 10 percent) and poverty to about 46 percent. It is estimated that up to 84 percent of children live in poverty areas.

The austerity in the plan, based on the government’s own projections, is expected to reduce economic growth of 2 to 3 percentage points annually over the next five years.

With numbers like these, one would think that Congress would be hard at work devising urgent economic development measures to rapidly boost growth. Unfortunately, this has not happened. Congress has yet to act on a report prepared by a bipartisan task force it set up as part of PROMESA, which laid out several key recommendations, such as shoring up Medicaid, extending the earned income tax credit to the island and supporting business development. The Financial Oversight and Management Board, in its report, also encouraged Congress to do more to stimulate Puerto Rico’s economy.

As for the Financial Oversight and Management Board and Puerto Rico’s government, not a single major economic development project has been presented to the board, even though PROMESA explicitly gives it power to fast-track “critical infrastructure” projects that create jobs and jump-start the economy.

Growing Into a State?

The issue is now getting tangled up in Puerto Rico’s separate (and controversial) bid for statehood.

In a recent referendum plagued by poor turnout, Puerto Ricans voted to become the 51st state, which some argue is necessary to resolve its fiscal woes because it’ll lead to a lot of benefits. The General Accounting Office estimated that parity in federal programs will add up to $10 billion in transfers to the island. But bondholders and others are objecting to Congress’ consideration of statehood until the debt crisis is over.

They’re right about one thing: The likelihood that Congress would consider granting statehood to a bankrupt state or as a solution to the economic challenge via some kind of bailout is slim to say the least. For advocates of statehood, as it is for advocates of other political status options, the surest way to advance their cause is a revival of Puerto Rico’s economy.

Restructuring the debt and balancing the budget are important steps in that direction, but austerity alone will not solve the problem, just as it hasn’t in Greece. Puerto Rico cannot simply cut its way to solvency. It needs growth.

And to that end, Puerto Rico’s government could begin planning economic initiatives with the private sector, while Congress could act on the task force report, modest steps that could help the island get back on its feet. The data clearly show that it will only become a lot more expensive and politically sensitive.

In fact, solving the economic and fiscal crisis, while mitigating the impact of austerity on the most vulnerable populations, might be the most certain pathway to (finally) solving the political status question.