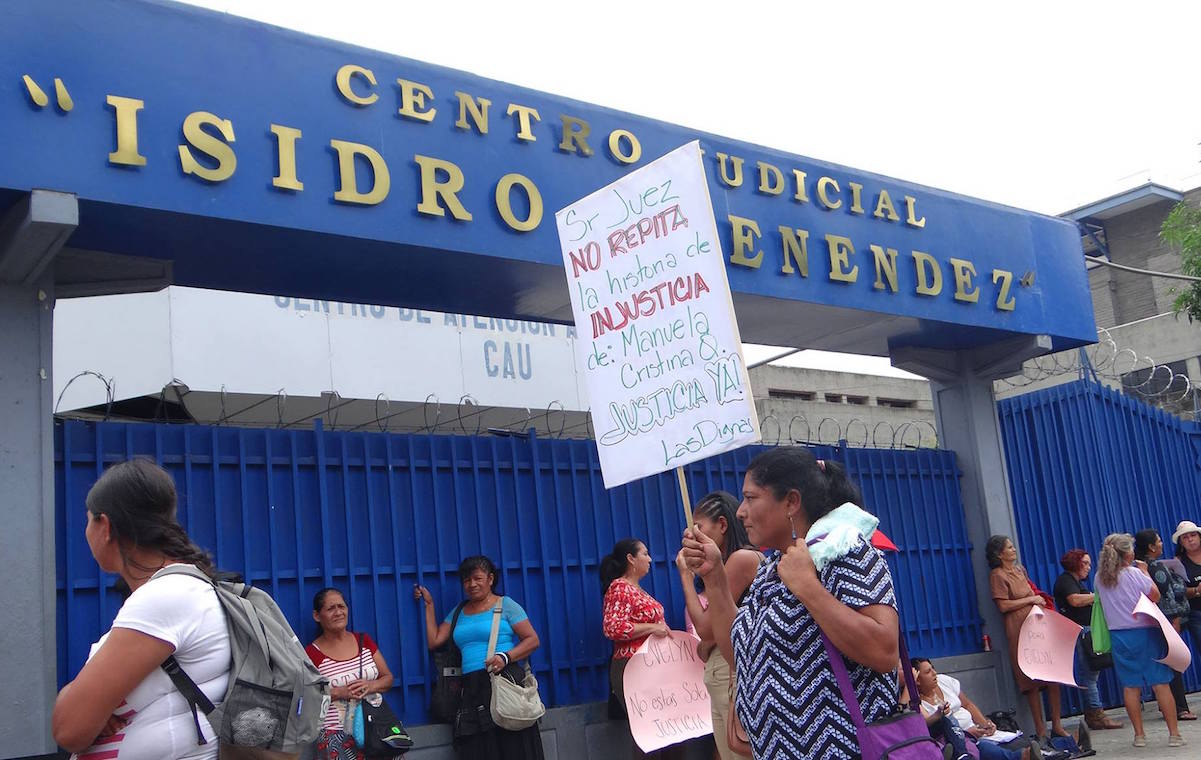 Las Dignas hold a protest on June 23 in front of the Isidro Menendez Judicial Center. (Courtesy of Las Dignas)

Marriage between minors and their abusers could be legitimized in El Salvador after judges ruled in favor of a legal union between a 12-year-old and her 34-year-old rapist in July. Women’s rights advocates fear this is a further setback in a nation where abortion is outlawed under all circumstances, including rape, incest, deformed fetus or endangering a woman’s life.

*Ana’s fate is a case study of the underlying issues in El Salvador where the legal system is biased toward men and women and girls are given little credibility in the justice process. Ana gave birth in February resulting from the rape and her alleged abuser was sent to prison. Her mother allegedly later interceded in favor of the rapist claiming he could provide milk and disposable diapers for the newborn. Judges Ramón Iván García and Santiago Alvarado Ponce used the mother’s argument to revoke the man’s arrest on July 11.

Las Dignas, a political feminist organization formed during the Peace Accords of the early 1990s between the United States and El Salvador, released a statement on July 28 calling the judges’ decision “irresponsible” and “sexist.” Members of the organization are working to eradicate the subordination of women in politics, society and the economy. By offering legal services, a school on feminism and other educational tools, members aim to bring justice to female victims of violence.

Leaders of the organization worry Ana’s case could set a precedent for similar future cases. The verdict in Ana’s case violates the stipulations of la Ley Especial Integral para Una Vida Libre de Violencia (LEIV), a law implemented in 2002, that mandates eradication of all violence against women.

“We are demanding the legal and justice system abide by this law which was an effort by many feminist organizations across the country to stop femicide and implement protections for women,” said Yanileth Mejía, who oversees the feminist school and a program focused on lesbian political activism at Las Dignas.

Without proper enforcement of the law, she argues victims of sexual violence will be condemned to a lifetime of repeated sexual abuse from their perpetrator, especially if rape-marriages are legalized.

The Salvadoran penal code states that rape of a girl or teenager younger than 18 years of age is classified as a crime against sexual liberty and is categorized as an aggravated sexual assault, resulting in 20 years in prison.

“The legal system is finding loopholes in this law by adding resolutions that make certain cases exceptions and will continue to do so when convenient,” Mejía said, alluding to Ana’s case.

The announcement published by Las Dignas calls out the Chamber of the Second Section of Center Cojutepeque which presided over Ana’s case.

“We argue for absolute prosecution of individuals charged with sexual abuse of a minor and that the Legislative Assembly make necessary reforms to eliminate the practice of infantile marriages,” the announcement states.

Magistrates in El Salvador acknowledged the possibility of rape in Ana’s case, but decided the right to conserve the family as whole—Ana, her rapist and the newborn—trumped Ana’s individual rights. Family code allows for marriage between minors aged 12 to 17 with adults in cases where there is a pregnancy and the minor’s parents or guardians give consent.

“This directly correlates with the country’s problems of sexual abuse, early pregnancy, sexual violence and the termination of school studies for these girls,” María Teresa de Mejía, a specialist in the UNICEF System of Protection of Childhood, told reporters at digital network Taringa.

The same report also states the Salvadoran Parliament is considering the possibility of prohibiting infantile marriages.

“If Parliament follows through, judges would have no window to legitimize teenage marriages,” Yenni Acosta, an attorney with Defense of the Human Rights of Children and Adolescents, told Taringa.

Yanileth Mejía of Las Dignas takes it a step further by arguing the only way to eradicate forced rape-marriages is for lawmakers to loosen the extremist abortion law. Harsh abortion laws impact women across Latin America.

The latest report from Insight Crime uses data from 2012 and shows El Salvador topping the list in Latin American femicide with a rate of 8.9 homicides per 100,000 women. Seven of the ten countries with the greatest number of crimes against women are in Latin America.

“I insist the greatest deterrent of abuse is for women to have the tools and resources to navigate a flawed judicial system,” Mejía said. “Less stringent abortion laws are a start toward self-empowerment.”

*Note: Ana is an alias for the 12-year-old whose case is mentioned throughout the article. All quotes were translated from Spanish to English.