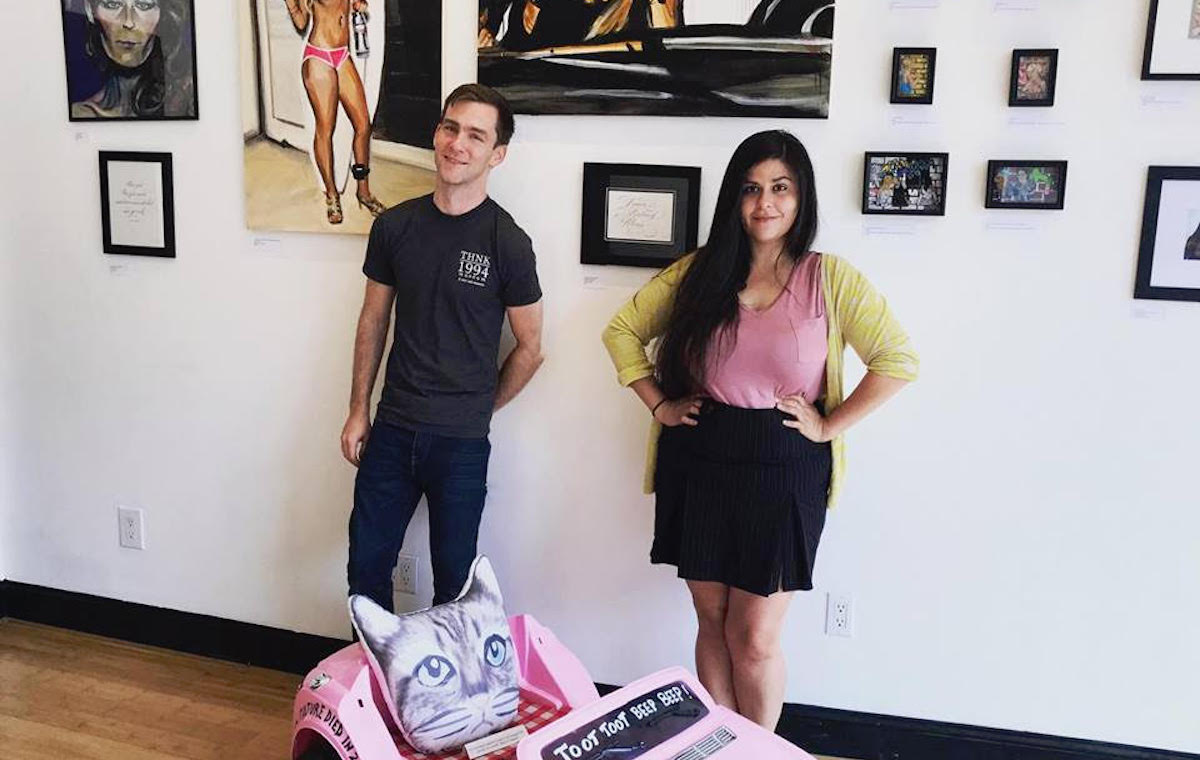 It’s your typical New York City love story—woman meets man, that man is into men, and together they form a pop culture museum. That, in a nutshell, is the story of the two masterminds behind the THNK 1994 museum in Brooklyn.

But, THNK 1994 isn’t a bubblegum pop culture-centered type of space. The curators take a look at very specific and obscure early 2000s pop culture moments centered around female celebrities and provide a more in-depth analysis of the double standard faced by them.

Matt Harkins, a New York City native, and Viviana Rosales Olen, a second generation Mexican-American from Las Vegas, met four years ago when they were both comedians trying to get their careers up and running. Each performed at different basement comedy clubs around New York City, but their “big break” hadn’t come along.

“I think before I met Matt my parents were like, ‘You tried and it’s not happening,’” Olen told Latino USA. Olen had been in NYC almost a decade before she met Harkins. They met back in 2013 when both were part of The Upright Citizens Brigade (UCB), the only accredited improv and sketch comedy school in the country. On New Year’s Eve, the two connected and as Olen admits, she chased Harkins until they became best friends and eventually roommates. Little did each of them know they’d become one another’s creative saving grace.

On a cold winter day, Harkins and Olen came across the ESPN 30 for 30 documentary titled, “The Price of Gold,” which focused on the Tonya Harding and Nancy Kerrigan scandal that rocked the ice skating world.

Immediately, both were hooked and wondered why this American tragedy, which they vaguely remembered from childhood, wasn’t talked about more. They were especially taken away by the role domestic abuse played in the broader storyline, something Olen said they did not take lightly.

“The last thing we wanted to do was glorify or have fun with the idea of a woman being attacked and we wanted to make that clear right away,” she said.

That moment was the catalyst for the creation of the THNK 1994 museum. The museum’s name is a combination of Tonya Harding and Nancy Kerrigan’s initials, 1994 was the year the attack on Kerrigan happened. Their vision, which started off as a passion project in the hallway of their first apartment, has now morphed into a full blown storefront museum dedicated to often ignored or critiqued tabloid moments centered on women.

The infamous 2007 barbecue’s invitees included Lindsey Lohan (and her ankle monitor), Britney Spears, and of course, Paris Hilton. All women who went through difficult times and party-girl phases but were chastised for it, something both Olen and Harkins agree wouldn’t have made as many headlines had they been men.

In another part of the museum, you’ll see iconic moments in pop culture such as Naomi Campbell doing community service while wearing high fashion outfits, or when Winona Ryder was in court because of theft charges. In the center of the main floor, you’ll see a strawberry milkshake-colored toddler car with a cat pillow and the words, “Toot Toot Beep Beep,” written on them. The car, a staple piece of the collection, is placed near a painting of rapper Missy Elliott.

Across the hallway, they have pieces from their “Olsen Twins Hiding from the Paparazzi” exhibit, as well as other paintings from their pop-up series which pays homage to models who have fallen on the catwalk. In their loft space, you’ll find their permanent exhibit, the one dedicated to Tonya Harding and Nancy Kerrigan.

Every inch of their apartment has been turned into a museum space. Harkins and Olen work with various LGBTQ+ and female artists from around the country who contribute to their museum. Laura Collins, a contemporary visual artist based out of Chicago, has worked with them since the Olsen twins exhibit. Derek Covington Smith, a Mississippi native, creates many of their pop culture icons portraits.

"Community Service" by @DerekCovingtonS
commemorating the many fashions #naomicampbell wore to her week of community service. pic.twitter.com/3bsV4VOwAl

Harkins and Olen believe there is beauty in the oddities and imperfect moments of pop culture icons and almost resent the fact they are not celebrated more. Neither agrees with the idea of locking people and celebrities into a box. However, they do think women get the unfair part of the deal when it comes to media critiques and overall expectations.

“We like to look at women who aren’t in the box and say ‘Hi, it’s ok because this behavior on a man would be absolutely celebrated,’” said Olen.

Both admit living together and working together can lead to friendship and business overload but can’t imagine doing it with anyone else. They perfectly complement each other and agree one’s strength is the other’s weakness. As far as what the future holds for THNK 1994, both are hoping to find investors and not have to go back to their former jobs as self-described “pizza shop girls.”

Harkins and Olen have created a safe space that welcomes artists and embraces the nontraditional. They have given their all to this museum and ignored the naysayers.

“If people say something you love or something you’re doing is stupid then absolutely don’t talk to that person anymore,” Olen said. “If someone doesn’t want something to do with you then turn around and love the world.”