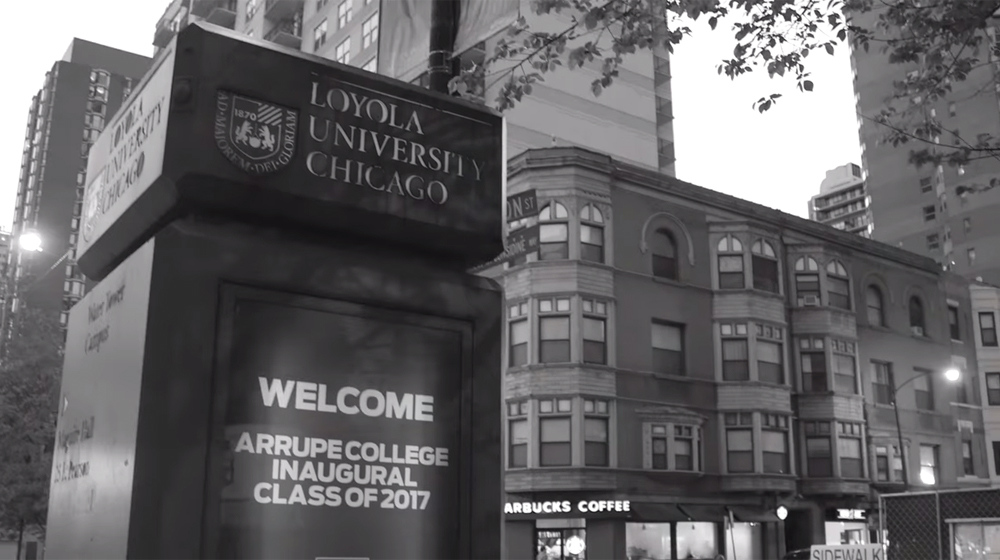 CHICAGO — As Lisseth Perez completed her education in the Chicago Public Schools, she kept her undocumented status private even when her college counselor, a trusted resource in the school community, kept pushing her to opportunities for which she did not qualify.

It was late in her senior year of high school when Perez shared her status with school staff.

“They couldn’t help me because I wasn’t giving them the right information. It was difficult for them to help me because the deadlines for the scholarships for undocumented students passed,” Perez told Latino USA.

Perez, who had demonstrated academic excellence in high school and taken Advanced Placement classes, said she was “stuck with going to a community college.”

Then, the day of her senior prom in early June 2015, Perez got a phone call from Loyola University Chicago’s Arrupe College, a brand-new two-year college, saying they found money for her to attend. All she needed to do was pay a small deposit.

Earlier this month, Perez graduated from Arrupe with an associate’s degree and a full ride —including room and board— to Loyola University Chicago. Her family will not have to spend over $60,000 during the next two years.

“When I told my mom and dad about the full ride to Loyola,” Perez recalled, “my mom started crying. We were looking at how much a semester is at Loyola, about $32,000. My mom said, ‘Even if me and your dad worked every day, 24 hours a day, for a full two years, we wouldn’t be able to afford that.’ ”

One of the first questions Arrupe’s dean and executive director Father Stephen Katsouros received as he promoted the school was, “Will you accept applications from undocumented students?” He said the school would. But he also recognized “their needs will exceed our resources. Our financial model is based on all of our students qualifying for Pell and MAP grants.” The 20% of students at Arrupe who are undocumented remain ineligible for federal and state financial aid.

Recently, a Loyola alumnus and his wife donated $6 million for current and long-term support of undocumented students. Arrupe also partnered with TheDream.US, an organization that helps fund programs for undocumented college students. These fundraising efforts will help secure the academic and support services Arrupe’s first-generation college students need to make it through college.

“It’s time-intensive but we’re seeing the results,” Katsouros said. “The faculty that we’ve hired, the staff, they’re here because they’re so invested in the mission. The mission, of course, is our students. I have colleagues who are here morning, noon, and night meeting with students: tutoring, problem solving, or advising.”

This fall, 75 students who started at Arrupe in 2015 moved on to a four-year college and 82 completed the two-year program, resulting in a 52 percent completion rate. Nationally, only five percent of students finish community college in two years, according to Complete College America.

Another 26 students will graduate by December. Seven more students should finish during their third year in the program, moving Arrupe’s three-year graduation rate to 72 percent—far beyond the 28 percent of community college students who complete their associate’s degree in three years.

This success is the result of Arrupe’s model. The college accepts promising high-school graduates, keeps tuition down (around $15,000 a year), provides financial assistance to all students (the most a student pays is a few thousand dollars), offers an academic program strong on philosophy, and incorporates support programs to help students personally and emotionally.

Thirty-eight percent of the graduating students made the Dean’s List with a 3.5 GPA or higher. The school’s student government leaders are all undocumented, as well as all the students who graduated with 4.0 GPAs.

‘The Dean Knows Your Birthday’

Perez said that during her two years at Arrupe, “They didn’t make it like a community college where you go to class and go home. The staff knows you. The dean knows your birthday—he calls you on your birthday.”

But Perez also raised concerns about how Arrupe students are portrayed. A recent Chicago Tribune article described the students in its headline as “vulnerable.”

“That was horrible,” Perez said. “They talked about students facing deportation.”

Perez added that she doesn’t know about anyone at Arrupe facing deportation.

Katsouros had lunch with five students after the Tribune article came out. He said that one African American student told him, “I would rather be called poor than vulnerable.”

This is why, Katsouros explained, “When the fundraising director and I meet with potential donors, we are careful not to present our students as a demographic of deficits.”

In his book about Arrupe, Katsouros quoted an undocumented student who told him, “I do understand pity can influence donors into digging into their pockets. But why do we have to have people feel sorry for us when we can impress them instead?”

Without fundraising, Arrupe could not meet the needs of its students—whether they’re legal residents or undocumented. Arrupe provides breakfast and lunch to all students, all of whom commute. Each incoming freshman gets a laptop. One student is receiving help with housing because he’s homeless.

Students also attend retreats where, according to Perez, build a sense of community and create the feeling of being in a safe place.

“Students go and talk about their purpose and their struggles, and they openly talk about problems that you wouldn’t talk to just anybody about,” she said.

But not all students made it through Arrupe’s program. Fr. Katsouros chalks up that lack of completion to an insufficient college readiness, family responsibilities, or financial concerns that went far beyond anything Arrupe could resolve.

Still, word has spread quickly about Arrupe’s model. The college received over 1,400 applications for 200 seats in its 2017 freshman class. Arrupe is also inspiring other universities to advocate on behalf of undocumented students.

This spring, DePaul University’s president approved a $2 a quarter increase to its undergraduate tuition. This will raise over $92,000 in scholarship money each year for undocumented students

“We understood that we pay a lot of money. Why can’t we do something to help someone else out?” Figueroa asked himself. “St. Vincent DePaul advocated for the oppressed, people who didn’t have resources, the less fortunate. For us it was about doing something that could help someone else.”

After his position in CPS got cut, Figueroa returned to DePaul as a graduate student in the counseling program. He wanted to bring the advocacy efforts he participated in at the high-school level to his college campus Even though the Figueroa and other UVA members were not undocumented, they knew the importance of allies and wanted these efforts to benefit someone.

However, UVA knew they could not bring about any change alone. So they began to reach out to and gain support from the minority fraternities and sororities, the multicultural student organizations, feminist, and LGBT groups on campus.

Within two years, UVA worked with the Student Government Association to present a referendum during spring 2017 SGA elections. Overwhelmingly, 85 percent of the students who voted said “yes” to the tuition increase—despite the pushback, mostly on social media, from DePaul’s conservative student groups.

A small council at DePaul will determine how to rollout this undocumented student scholarship program.

“I feel very proud to say I’m undocumented” Perez said. “In high school, this made me feel less than other students. But now I feel if I’m doing this and I’m undocumented, everyone else can do it and there’s no excuses. Every time I lost hope, good things came to me.”

Editor’s Note: Maria Hinojosa, Latino USA anchor, is the Sor Juana Inés de la Cruz Chair of Latin American and Latino Studies at DePaul. She was not involved editorially in the publication of this story.