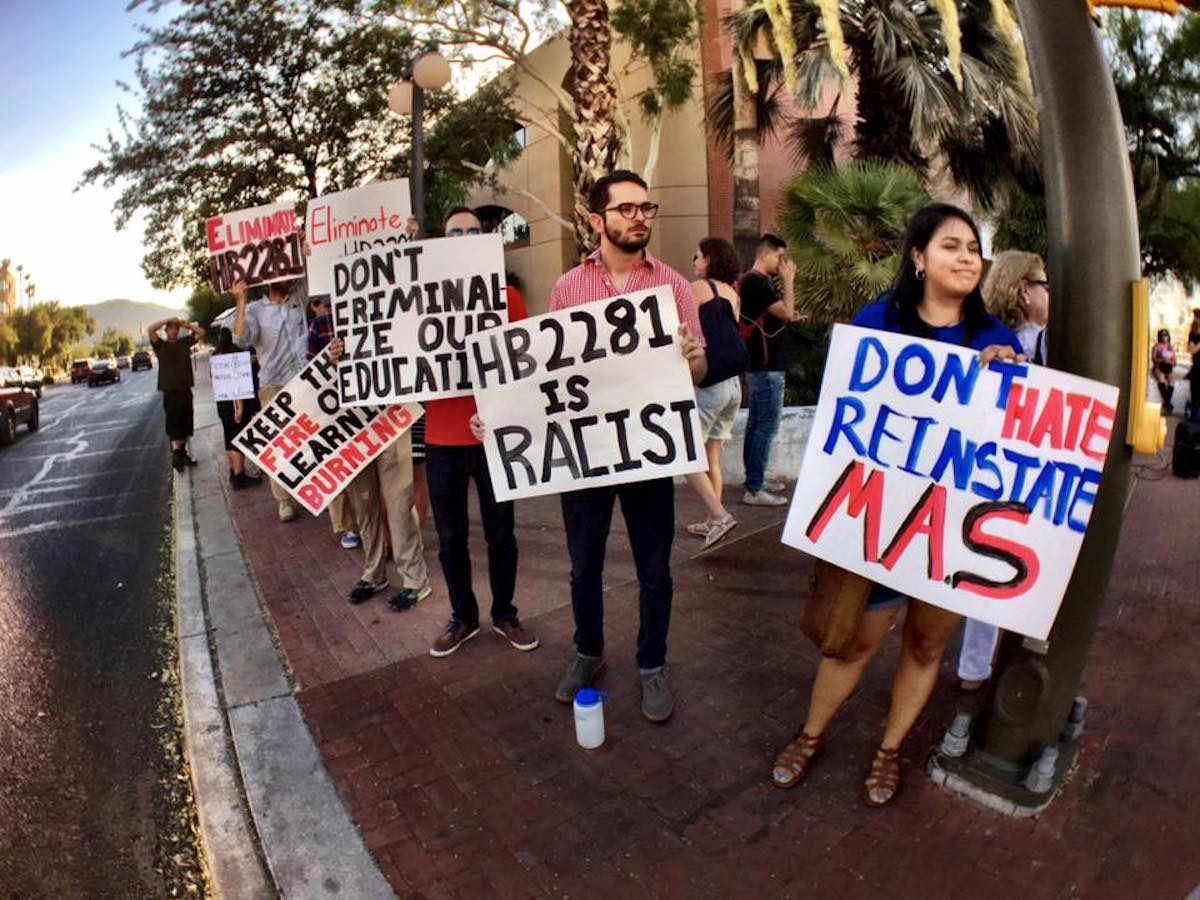 In historic news on Monday, a U.S. District Court overturned Arizona’s ban of Mexican American Studies (MAS). According to U.S. District Judge A. Wallace Tashima, the court concluded “that plaintiffs have proven their First Amendment claim because both enactment and enforcement were motivated by racial animus.”​

The ruling also stated that John Huppenthal, Arizona’s former superintendent of public instruction, was driven by discrimination: “Huppenthal’s comments describing his ‘eternal’ ‘war’ against the MAS program, (Ex. 104), expose his lack of interest in the welfare of [Tucson Unified School District] students, who would be the focus of legitimate pedagogical concern if one existed. Those comments reveal instead a fixation on winning a political battle against a school district.”​

The court also confirmed that the discriminatory law was pushed for political gain: “Having thus ruled out any pedagogical motivation, the Court is convinced that decisions regarding the MAS program were motivated by a desire to advance a political agenda by capitalizing on race-based fears.”​

Activists, educators, community members, and students across the nation have been celebrating. The court’s findings prove the claims community members had made all along that the law was discriminatory and that MAS helped students succeed academically.

“This victory is all of ours,” said Sean Arce, one of the original MAS teachers and curriculum designers. “It would not have been possible without you all.”​

“This is a victory for all of us today,” Dr. Anita Fernandez, director of the Xito Institute, said on Monday. “Not just for Arizona but for every single community in this country and for our children to have a humanizing education that includes their history and their culture.”

This is indeed a major victory.

Just a generation or two ago, this racist law would have decimated our community. Other states would not have heard about it until similar laws would have spread into their schools—and by then it would have been too late. Instead, through social media, Tucson’s students told the world what was happening as the state rounded up textbooks from classrooms to enforce the MAS ban.

We have the powerful students who stood up for their education—the powerful community that suffered the brunt of this cultural crises, the Tucson familia who inspired us Tejanos and others from every state to defy great odds for the greater good.

We are honored to be part of this familia.

None of that would have happened had we not been inspired by the Tucson community.

The Research Proved It

There are also other very powerful effects that will be felt across the nation.

In the past, we had only anecdotal evidence that Ethnic Studies worked.

Some of those were simply our personal accounts, like mine.

But that was not enough for most administrators. But now, we have scientific proof. And that research was scrutinized in court and helped to overturn this unjust, un-American and yes, racist ban.

“This is a great day for advocates of educational equity everywhere,” said ​Dr. Nolan Cabrera, whose research helped win the case. “We’ve long been arguing that the ban on Mexican America Studies was state-sponsored racism and this ruling affirmed that stance.”

With this experience, with this evidence, and with this knowledge, we now must implement Ethnic Studies in our schools today.

We need this field of study more than ever as we skirmish to find leaders to put a band-aid on the cultural crises breaking out all over the nation. With a firm foundation in Ethnic Studies, we would edify our educational system and cultivate the leaders who would avoid these crises.

But the work must continue, or else progress will never continue.

As Curtis Acosta, another of the original MAS teachers, said on Monday:

“Today is a wonderful day for justice in our country. For over a decade, the state of Arizona practiced active discrimination and racist intent against Mexican American Studies and Mexican American students. I am so proud of our former students, my colleagues and our program. However, I can’t help but feel bittersweet for all the students who never had the opportunity to blossom and find their academic identity in our classes. The loss is immeasurable and tragic. I hope these actions will never be repeated by any federal, state, or local government against its children and teachers. Yet, today is a good day for all of those who never lost faith in our struggle for justice, and a great day for Arizona and America. We are thankful for this bright light. Let us hope it can heal some of the ancient and recent wounds of racism and discrimination in our country.”​