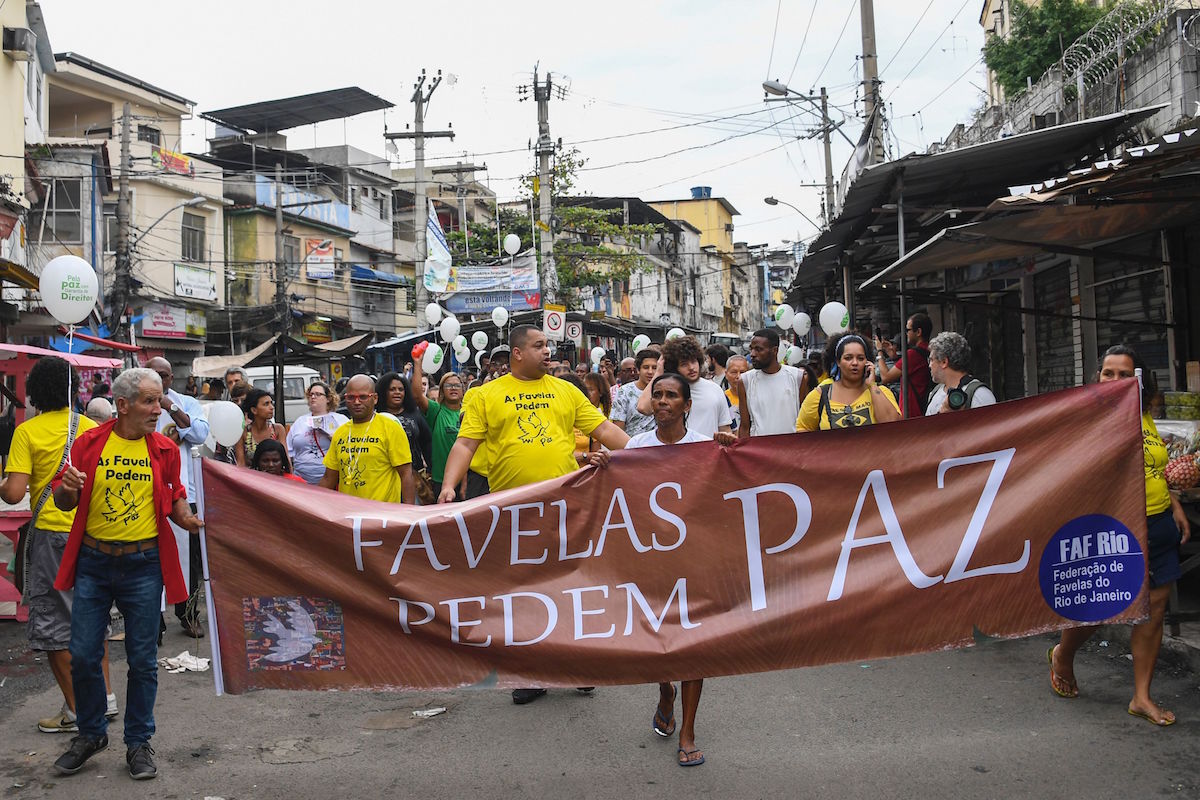 Residents of Rio de Janeiro's Jacarezinho and Manguinhos favelas march in demand of peace, in Rio, Brazil, on August 20, 2017. In the first half of this year Rio tallied 3,457 homicides —the highest level of violence since 2009 and 15 percent more than during the same period in 2016. (APU GOMES/AFP/Getty Images)

In the 1990s, the capital of Colombia’s mountainous Antioquia province Medellín had one of the world’s highest-ever recorded murder rates: 380 homicides per 100,000 people. After national authorities wrested control of the city’s poorest communities from paramilitaries, mayor Sergio Fajardo rolled out an entirely new approach to quelling violence. It was known as “urban acupuncture.”

A core tenet of this approach to social urbanism involved pinprick interventions in neighborhoods experiencing extreme poverty and chronic violence. Government and business invested in first-class community centers, schools and public transit, using parks, gondolas and escalators to bring different parts of the city together.

The results were stunning. Today, homicides in Medellín are around 20 per 100,000 and falling.

For over a decade, Latin America’s homicide rate has been at least three times the global average. Why has the rest of the region failed to grasp these lessons?

Latin America is where the most murders in the world happen. In 2016, at least 43 of the 50 most homicidal cities in the world —led by San Salvador (El Salvador), Acapulco (Mexico) and San Pedro Sula (Honduras)— were located in the region. Roughly four Latin Americans are killed every 15 minutes.

Things aren’t bad everywhere. Argentina, Costa Rica, Ecuador, Peru, Uruguay and, in particular, Chile (with its homicide rate of 2.7 per 100,000) are relatively safe. Even so, their combined average homicide rate of 6.5 per 100,000 is twice that of North America.

There’s no single solution for preventing lethal violence. But data-driven interventions, like those pioneered by Colombian mayors two decades ago, are more likely to help Latin Americans than many current approaches, which range from near apathy in Venezuela to repressive policing in Brazil, El Salvador and Mexico.

They also benefited from informal pacts with heavily armed factions, not unlike the controversial 2012 gang truce that led to a temporary peace in El Salvador.

Rather than replicate these experiences, Latin American governments have responded to rising violence by sinking more money into police forces, prosecutors and prisons.

Today, the region annually invests between $55 and $70 billion in public security, says the Inter-American Development Bank, and criminal violence costs the equivalent of 3.5% of total regional GDP in lost productivity, insurance premiums and security provision (both public and private). That adds up to US$261 billion a year or $300 per person.

Even so, only 20 of every 100 murders in Latin America results in conviction (the global rate is 43 in 100). In Caracas or San Salvador, 10% of cases are cleared, versus New York’s 68% and Tokyo’s 98%. Meanwhile, prisons are bursting at the seams.

Many factors contribute to Latin America’s homicide problem, among them the war on drugs, abundant unlicensed firearms, persistently unequal gender relations and, in Mexico and Central America, thousands of marginalized, uprooted, and sometimes convicted U.S. deportees.

A growing body of scholarship on homicide in the region should help policymakers identify the most important drivers to craft better anti-violence programs.

Inequality is high on that list. Latin America is home to ten of the world’s 15 most unequal countries, and while the relationship between inequality and violent crime is not causal, there is evidence of a strong correlation.

Concentrated poverty plays a role. For example, World Bank scholars recently found that an increase teen pregnancies in Latin America is associated with 0.5 to 0.6 additional murders per 100,000 people. Meanwhile, in Medellín, a 1% rise in permanent income generated a 0.4% reduction in homicides.

The region is highly urbanized, with roughly 85% of people living in cities and this has an important role in Latin America’s levels of violence. Across the globe, homicidal violence tends to be hyper-concentrated in peripheral urban areas experiencing chronic disadvantage.

Cities also have a higher density of actual and would-be offenders—unemployed young men. About 13% of Latin America’s 108 million 15-to-24-year-olds are unemployed, which has encouraged a small number of them to commit “aspirational crime.”

Data suggests that Latin America’s murderers are, by and large, young, out of work, out of school and out of options. In Brazil, studies show that a 1% rise in unemployment rates for men results in a 2.1% spike in homicides.

The region’s weak security and justice institutions only worsen this violence epidemic. Some Venezuelan prisons are literally under the control of gangs, while in Brazil, jails have become death traps, and police kill with impunity. Meanwhile, Mexican citizens profoundly distrust their government.

Such frailties plague nations across the region, and are exploited by gang bosses and political elites alike. This allows violence, impunity, patronage and corruption to flourish.

What Works, What Doesn’t

While organized crime is heavily implicated in homicides, it is only one manifestation of a sprawling cluster of social and economic problems.

To address these underlying risks, public officials will need to replace ineffective “iron fist” strategies, which have only fueled violence and mass incarceration, with concrete homicide-reduction plans inspired by what’s worked elsewhere.

Overall, more than 90% of all homicides occur in less than 2% of street addresses. In Bogotá, virtually all murders are committed in just 1% of the city’s street corners.

The majority of murders also occur during just a few hours out of a typical week: Friday and Saturday nights, and on payday. Using new digital platforms, law enforcement officials can now monitor criminal violence in real time and prevent lethal violence before it occurs.

Brazil has registered positive outcomes with similar tactics in Espírito Santo, Recife, Rio de Janeiro and São Paulo. Although not all of these efforts were sustained over time.

Very specific types of behaviors, including prior violence, contact with the law, alcohol abuse and gun ownership, are also associated with homicide perpetration and victimization. Deterrence-based strategies that prioritize the most violent types of crime could show immediate results, as the Ceasefire project did in Boston (U.S.) and Stay Alive did in Belo Horizonte (Brazil).

Instinct for Life, a regional initiative launched by over 30 NGOs and international agencies, recommends evidence-based policy-making to help cut Latin America’s murder rate in half over the next decade.

Every 15 minutes, a Latin American is killed. How to change this situation? Learn more: https://t.co/AHxCKaC7MZ pic.twitter.com/CorREpNzYz

The campaign is advocating for reductions of on average 7.5% a year in homicide-beset Brazil, Colombia, El Salvador, Guatemala, Honduras, Mexico and Venezuela. If successful, more than 365,000 lives could be spared.

The goal is bold, but also necessary and feasible. Medellín and Bogotá proved years ago that violence is not chronic. Latin Americans, numb after decades of bloodshed, don’t have to simply endure it.