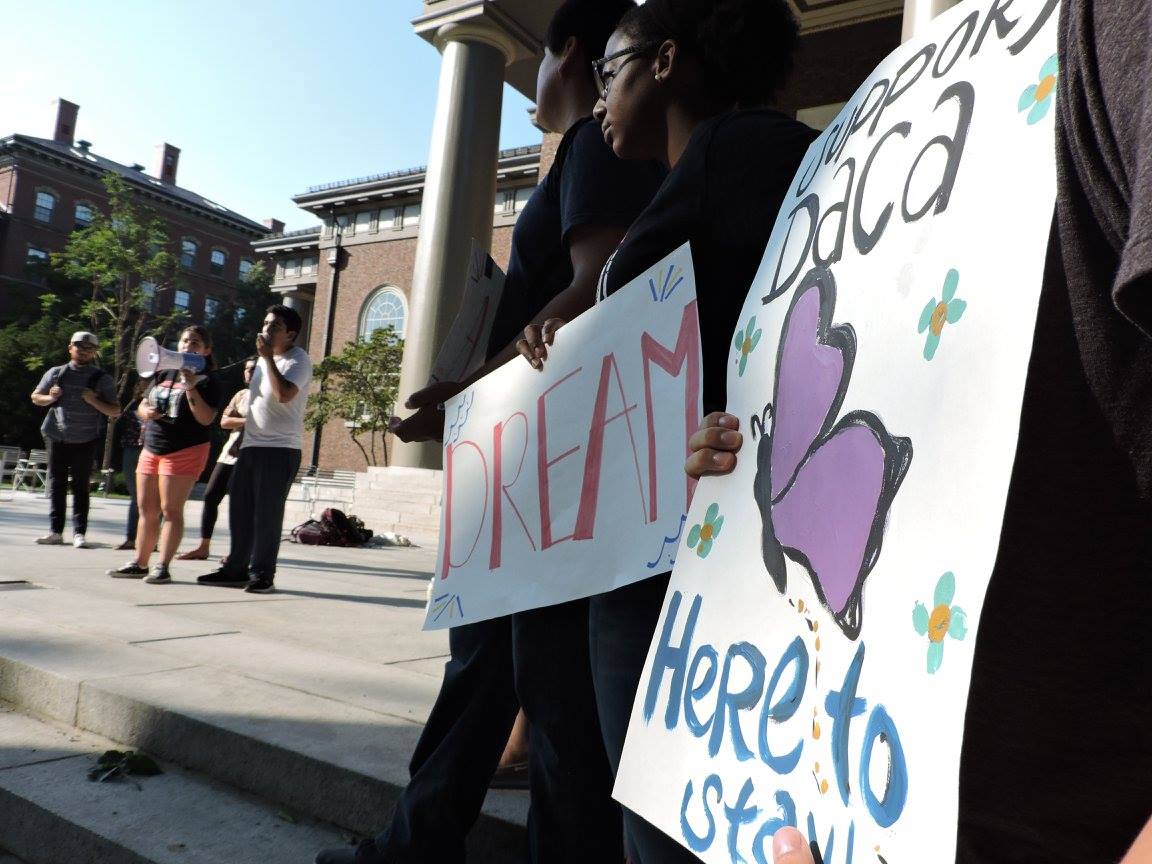 On Tuesday September 5, about 400 members of the Harvard University community participated in a Fight For Immigrant Rights Rally, organized by Harvard College Act on a Dream (Photo by Elijah Ezeji-Okoye and Maribel Nava/Used with permission)

CAMBRIDGE, MA — Uriel Espinoza had almost made up his mind that he would never get a license, a crushing self-realization for the then 15-year-old in 2012. It wasn’t just about being a teenager in a car. He wanted the opportunity to drive his parents and siblings around their hometown in rural Illinois without the worry of his parents being pulled over and deported. When other students enrolled in the school required driver’s education class, he “felt awful, knowing I couldn’t get that license and have that privilege.”

That’s when President Barack Obama announced the Deferred Action for Childhood Arrivals (DACA) program, an immigration policy that allowed undocumented youth to receive temporary deportation relief and eligibility for a work permit. Espinoza’s father rushed home and helped him put together the many documents necessary to apply.

“I’m not really religious but at that moment it seemed like divine intervention. It seemed like it came just in time,” Espinoza told Latino USA.

He was also starting to think of applying for colleges. Five years later, Espinoza, 20, is a DACA recipient in his junior year at Harvard University. He studies economics, and speaks with an air of wonder when he retells his journey to getting into the prestigious university.

But now the Trump administration announced the anticipated end of DACA on Tuesday.

With DACA, young immigrants have a work-authorization document that lasts two years and during that time, they have temporary deportation relief. That permit can be renewed, and the program does not cover everyone brought to the United States as a child.

All of the following qualifications had to have been met in order to get DACA, which is administered by U.S. Citizenship and Immigration Services (USCIS):

Espinoza was born in Mexico and moved to Atlanta at the age of six with his parents. His father, a construction worker, wanted him to get a decent education. His younger sister is also a DACA recipient, and his youngest brother, a U.S. citizen.

In a common barrier for undocumented families, the Espinozas were never able to register for wireless internet or a bank account due to their lack of Social Security numbers. As a teenager, Espinoza would go to his friends’ homes and use their wireless networks or stay at school. He was already doing research on colleges when he applied to DACA, for which his father paid the almost $500 fee, and an additional $700 to an attorney to assure the paperwork was filled out correctly. His parents were initially nervous about his giving up personal information for the opportunity, a situation that didn’t dawn upon him until he had his first biometrics appointment, where Espinoza’s fingerprints were taken with other person information.

But he was excited about being able to get his first job (at a Piggly Wiggly), and for the opportunity to one day help his parents get a mortgage.

Espinoza enrolled at a community college his junior year of high school with the help of his protected status, and studied math and physics. He applied to schools that had need-based application processes and financial aid for undocumented students. He was accepted into Harvard University, Yale University, Williams College, Pomona College, Amherst College, and the Massachusetts Institute of Technology.

“My parents couldn’t afford fifteen, let alone sixty thousand a year,” he recalled. Nonetheless, Espinoza was offered full rides at most of the universities. He picked Harvard.

“When I saw the email saying, ‘There was an update on your application,’ my brain froze. I didn’t process anything until the ‘Congratulations.’ My parents had gone to the store, and when they returned and I told them, they both started crying,” he said.

Espinoza had also seen a documentary about undocumented students at Harvard, and thought, “I could have a community there.”

With the help of Harvard’s attorneys and resources, Espinoza was even able to study abroad in Germany, one of the few “loopholes” that existed in Obama’s DACA policy to allow student to return to the United States without being expelled from the country for 10 years for violating his DACA terms. He has renewed his status once while at Harvard, as a part of the two-year renewal requirement. All of that changed when President Donald Trump was elected. Espinoza had another month until he needed to file for renewal, but he printed out the forms November 5.

“[Trump’s] campaign promise was to end DACA as soon as he took office,” Espinoza explained. “I knew if I was going to renew, it had to be then, doing the math. The two months between November 8 and January 21 were the most stressful in my life.” Three days after Trump was inaugurated, Espinoza’s DACA renewal arrived in the mail. It will expire in January 2019, five months before he graduates.

“I’ve always been nervous about my parents, who can face deportation at any time. I need to focus on Plan B or C,” he said. “Should I apply for jobs overseas? Focus on changing my career to something easier for employer to petition for me?” He worries about his younger sister, who is beginning to research colleges. But he considers himself as one of the lucky DACA recipients due to his access to Harvard’s resources and professors, many of which have reached out to offer support.

Espinoza described Attorney General Jeff Sessions’ Tuesday announcement as “a huge step backwards,” but described his surprise that many Republicans have spoken out against ending DACA, including his own congressman, who sponsored the conservative RAISE Act, a counter proposal to the DREAM Act.

“I’m just worried they won’t compromise on how to fix the issue. But I feel like Congress as a whole wants to fix it,” Espinoza explained.

Until then, he considers it his duty to support fellow undocumented students, and organize rallies and educational phone banks to education people about what DACA is.

“The everyday person doesn’t know about what DACA is,” he said. “Even at Harvard sometimes.”

In an August 28 letter, Harvard President Drew Faust criticized Trump’s elimination of DACA, saying, “This cruel policy recognizes neither justice nor mercy. In the months to come, we will make every effort to have our voice heard, in the halls of Congress and elsewhere, about the need for the protections of DACA to continue.”

Additionally, Espinoza and other students received a more specific email about therapists and attorneys. The email also encouraged students to attend a rally held by the immigration reform student group, Act on a Dream, which was attended by hundreds of students and community members on Tuesday.

Organizations are calling for members of Congress to co-sponsor the 2017 Dream Act in an effort to stem the impact of Trump’s decision.

The ACLU of Massachusetts has been vocal in its opposition of the Trump administration’s decision, and is pushing for the legislation.

“If Congress does not pass the DREAM Act or some legislation to protect Dreamers, those individuals could be deported once they lose their status in 6 months or later,” ACLU staff counsel Laura Rótolo told Latino USA. “Locally, we are calling on our Massachusetts legislature to pass state-level protections, such as the Safe Communities Act, which would protect Dreamers and their families by ensuring that local police do not help deport them.”

The ACLU is also pushing for state legislatures to pass higher education tuition equity to allow undocumented students going to state institutions to pay the same in-state tuition as their citizen classmates.

A memorandum issued by the Department of Homeland Security (DHS) stated that there will be no longer be consideration for new DACA applications, but those already submitted will be looked at on a case-by-case basis for approval or rejection. The program will be entirely phased out by March 5, 2020. People with permits that expire between Tuesday, September 5, 2017, and March 5, 2018, can apply for a renewal as long as they submit their application by October 5, 2017.

​Once a permit expires, a person will not be “considered lawfully present in the U.S.” and will be subject to deportation, and “their removal will no longer be​ deferred and they will no longer be eligible for lawful employment,” according to DHS.

It is a reality that worries Espinoza, especially since he chose to reveal his undocumented status to the federal government.

“You’re telling USCIS, ‘Here I am.’ You said I can come out of the shadows,” Espinoza said. “So here I am… and you said you won’t deport me.'”

One thought on “As DACA Ends, a Harvard DREAMer Wonders and Worries About Future”