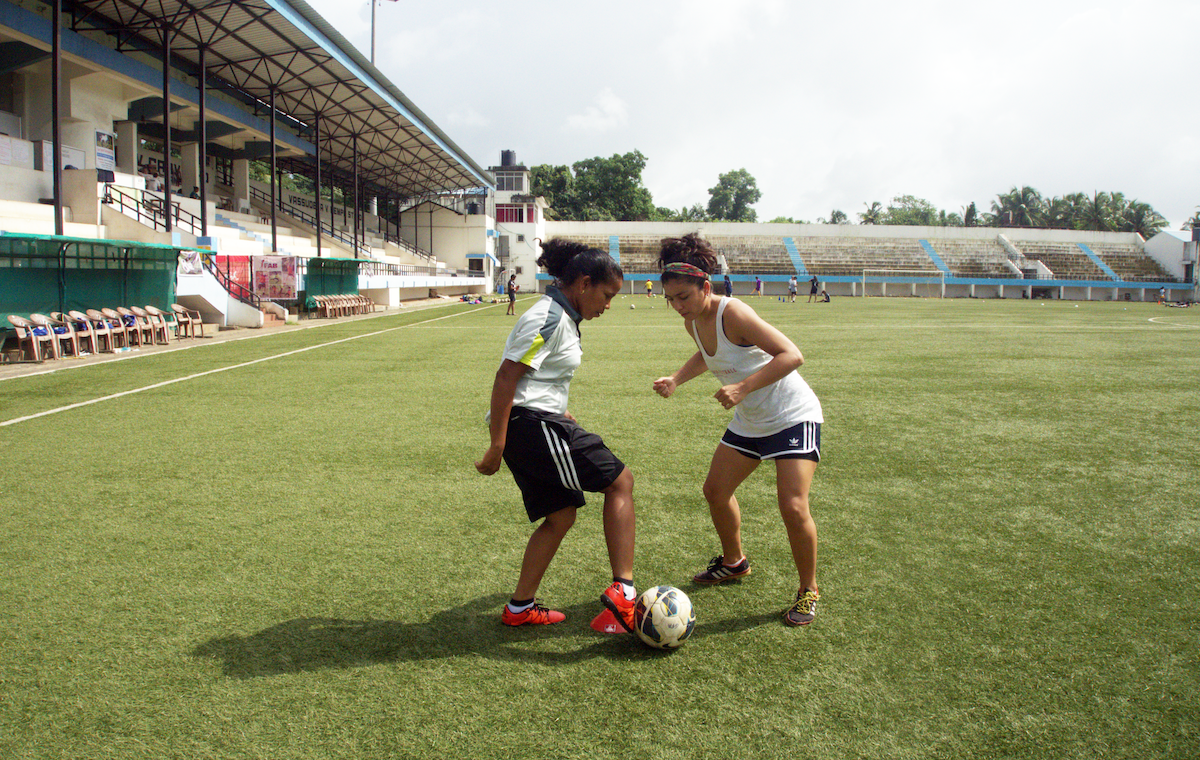 “Today, I want to talk about using your body strength on the field, and we will begin by discussing our bodies as colonized spaces.”

Juliana Román Lozano begins another day on the soccer field with girls and women players, this time in the coastal town of Mapusa in Goa, India, as part of the grassroots women’s soccer festival Discover Football. The Colombian native, who has played for the U-19 national team and several Argentine soccer clubs, is on a mission to eradicate what she has fought against all her life: misogyny on and off the field. Fittingly, she is invited to coach grassroots women soccer players and open the pitch to feminist agendas.

Lozano was nine when she escaped the violence perpetrated by drug cartels. Her physicist father pursued his PhD at Sweden’s Uppsala University while her anthropologist mother worked on her master’s thesis. Accompanying her father to his soccer games, Lozano got hooked to the ball. She learned Swedish on the field, to communicate with her team.

When she turned 15, the family moved back to Bogotá, and Lozano was stunned by the absence of girls’ soccer in her school.

“They teased me because I had muscles,” the 33-year-old told Latino USA. “They called me a lesbian because I was too ‘masculine’ for them. But my parents were encouraging. I went from class to class, asking girls to play. I created the first soccer team for girls at school.”

Early on, Lozano played in the midfield. When she was about 15 and was playing for the national and local teams, her position was right defender-wing. Later, it was defensive midfielder.

Eventually, Lozano played for the U-19 national team, but was itching to get out of Colombia. She missed the freedom she experienced in Sweden but wasn’t keen on living there again.

“I have fabulous Swedish friends, but the Scandinavian culture is very cold and unwelcoming. One woman on the street pushed me and said, ‘Move, blackhead’,” Lozano said.

Finally, she headed to Argentina to study anthropology, but not before she contacted Club Atlético River Plate to play first division soccer.

But the dream to ace soccer came crashing: “It’s the land of Maradona and Messi, but not for girls. We were handed men’s uniforms from previous seasons that bore their sweat stains,” she winced. On the other hand, boys and men had institutional support all along. Lozano’s teammates held two jobs, some of which meant standing all day for eight hours.

“Of course, we would lose 12-0 when we would play against a stronger team. River Plate expected our commitment but we were not given any support,” Lozano said, explaining why she moved to another club that trained fewer hours, so that she could focus on her education to bag a steady job. That’s when she realized her inability to make it big with soccer.

Studying anthropology opened her eyes to “colonization” in her own life: how she was mocked for playing soccer, how her body was expected to look. “I was no more willing to give my body, my strength, and my skills to these misogynist systems and institutions, like the Argentina Football Association,” said Lozano. The frustration was evident in her voice.

When she turned 22, Lozano met Monica Santino, who was developing a project in barrio Padre Mugica (Villa 31)—one of the most crowded and rough neighborhoods in Buenos Aires. Many NGOs were working with young boys, but none with girls. So together, they went to the public field there, and began to recruit girls to play. But that wasn’t easy either.

“Boys would start playing on the ground even while we were playing. They threw stones, but we didn’t stop. Slowly, more girls turned out to play,” Lozano said.

That was a decade ago. Today, that small spark, visible as La Nuestra Fútbol Femenino, has women’s teams of U-10, U-12, U-14, U-16, U-18 and a senior one, with 90 girls and women associated. “The players see the relation between being told to do the dishes and being thrown rocks at on the field. We have established ourselves in that public ground; we are also recognized as a feminist reference in sports,” Lozano said.

The organization championed a tournament where other teams were invited to play in barrio Padre Mugica. This, Lozano says, was aimed at destabilizing class structures and assumptions about the neighborhood as a place where one could get robbed and killed.

Much of the work of La Nuestra Fútbol Femenino is in the realm of body politics. With abortion being illegal in Argentina, the organization provides girls with safe abortion, thanks to their network of other feminist organizations. Viewing soccer as a tool to decolonize women’s bodies—because of the athletic and a confident body that it helps develop, Lozano wants to translate powerful and aggressive moves on the field.

“Think of the shoulder push: women are usually told not to confront anyone. Similarly, if she needs to lift her head, she has to do it. The intention is to train women to get used to using her body with force, and be comfortable with contact,” Lozano said.

The Colombian women’s national team has come far since the time Lozano left her homeland: it made it to Rio Olympics in 2016 and has qualified for two FIFA Women’s World Cups. Yet, Lozano feels that there are still not enough paid professional soccer leagues for women.

On the other hand, the players associated with La Nuestra Fútbol Femenino have played at different international tournaments and soccer festivals, including the Homeless World Cup in Brazil, France and Mexico. Some of the senior players also play for the national team.

“If you want to be a soccer player, you have to be able to be a soccer player. As a coach, that’s what I encourage girls towards. A woman cannot be what she cannot see, and my job now is to be a role model for them, through my coaching,” Lozano said, as she headed to the pitch.

One thought on “From Colombia to India, Women Are Giving a Head-Butt to Misogyny With Soccer”