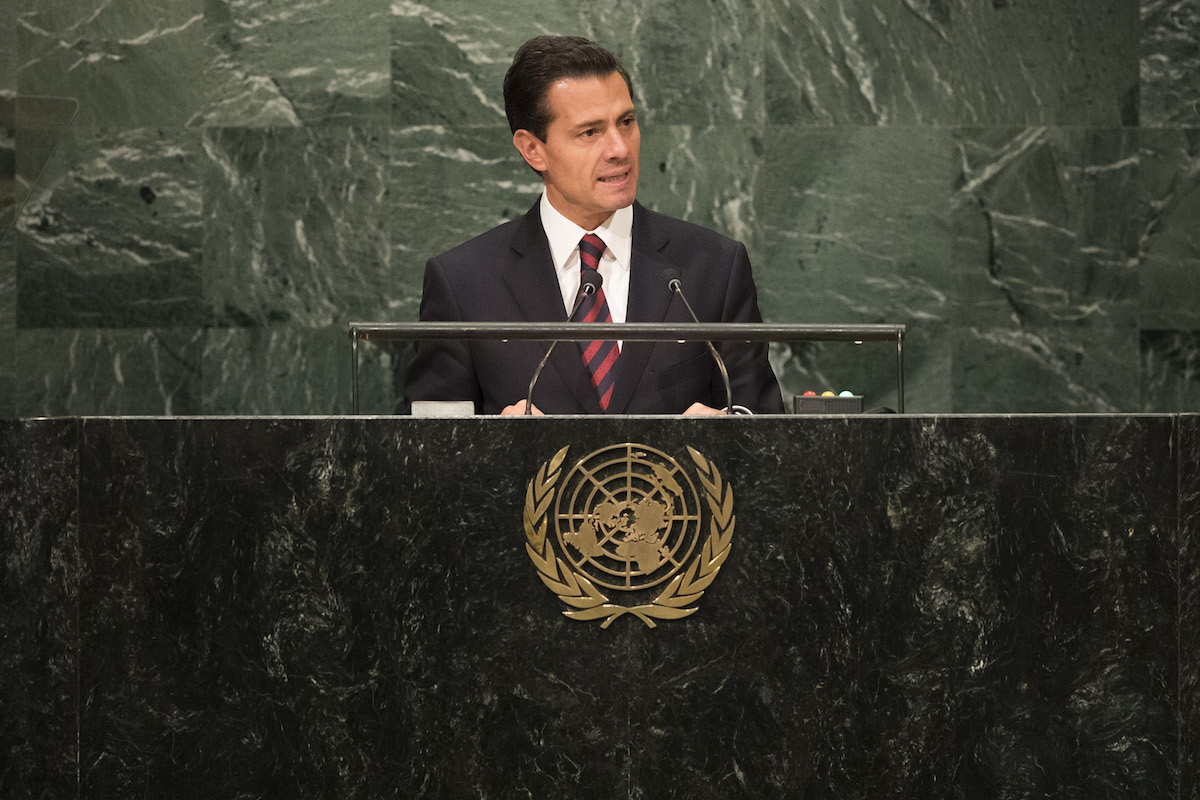 With global migration policy at the top of the agenda for this fall’s United Nations General Assembly, Mexico seized the opportunity on Wednesday to mention President Donald Trump’s initial plans to rescind the Deferred Action for Childhood Arrivals (DACA) program. Hours before Democrats Chuck Schumer and Nancy Pelosi announced that a bipartisan deal to restore DACA was already in the works, Mexican diplomat Miguel Ruiz Cabañas called out laws that criminalize, persecute and stigmatize migrants.

On Tuesday, Cabañas also tweeted about DACA and migrant rights.

#Mexico regrets the conclusion of #DACA program and is concerned about the uncertainty of young people born outside the #US. #HRC36

While Republicans and Democrats now talking about restoring DACA, it is still unclear what support and protection will be given to the 800,000 DACA recipients—650,000 of which are from Mexico.

In the meantime, the Mexican government seems to be taking a stand to defend migrant rights on multiple fronts, although it has been criticized for its immigration enforcement domestically. With promises to protect and assist the recipients of the DACA program through consular services, Mexico’s U.N. ambassador Juan José Gómez Camacho is also promoting a comprehensive migration compact on a global level. In 2015, the UN estimated that there were 244 million international migrants living in a country other that their birth country.

Immigrant rights experts who follow the DACA issue and Mexico’s response are predicting increased involvement from the Enrique Peña Nieto administration in the next months. Mexico has allocated money for protection resources for immigrants, like organizing informational workshops, covering lawyer fees and helping those eligible to people reapply for DACA.

“They’re doing a lot of work in regards to immigration and after the announcement of President Enrique Peña Nieto where he said he would redouble efforts, especially for DACA,” said Erika Hernandez, a policy analyst with Democracy Oracle.

During last year’s U.N. summit, Peña Nieto praised migrant rights and called for the decriminalization of migration. In a press release, the Mexican president described migrants as indispensable allies to development and said it was “essential to overcome visions that criminalize the phenomenon and promote global policies that have a positive impact on the lives of migrants.”

The Global Compact for Migration, a priority for the U.N. summit, is calling for migrant rights and freedoms. Countries supporting the compact are expected to present a framework for comprehensive international cooperation on migrants and human mobility by next year. Ambassador Camacho is spearheading the inter-governmental discussions for the compact, which seeks to combat xenophobia and eradicate human trafficking, among other issues.

Daniella Burgi-Palomino of the Latin America Working Group, expects that Mexico will emphasize the importance of protecting the rights of Mexican nationals living in the United States, which would include DACA recipients. “I think public statements in international spaces like the U.N. are important,” she told Latino USA. “It is definitely important for the U.S. and Mexico to make mention of their commitments of their responsibilities and to hold them accountable to that.”

“I would assume Mexico, because of how it has positioned itself, will make mention of at least protection of its own migrants in the U.S.,” Burgi-Palomino added.

Amy Shannon —senior advisor for Alianza Americas, a regional network of Latin American and Caribbean immigrant organizations involved in negotiating the global compact for migration— signaled out the importance of recent changes in U.S. domestic immigration policy and policies in the region to understand critical global trends.

“We are now living the logical extreme that started in the late 1980s and early 1990s that turned administrative violations into criminal violations and also deepened people’s understanding of migrants as criminals,” Shannon told Latino USA.

This latest domestic policy, according to Shannon, has only highlighted contradictions between the U.S. and the rest of the world.

“It is a moment, ironically, where we are trying to negotiate a new governing structure for migration at the global level at a time when the United States, who by moments has been something like a leader on rights-based approach to migration, is really not able to do that in any meaningful way,” Shannon said.

However, when it comes to the global migration compact, experts say it will be critical to look at the problem through a global lens. The key, according to them, is decriminalization.

“Then activists in the U.S. could argue that U.S. law is not living up to international commitments,” Shannon added.