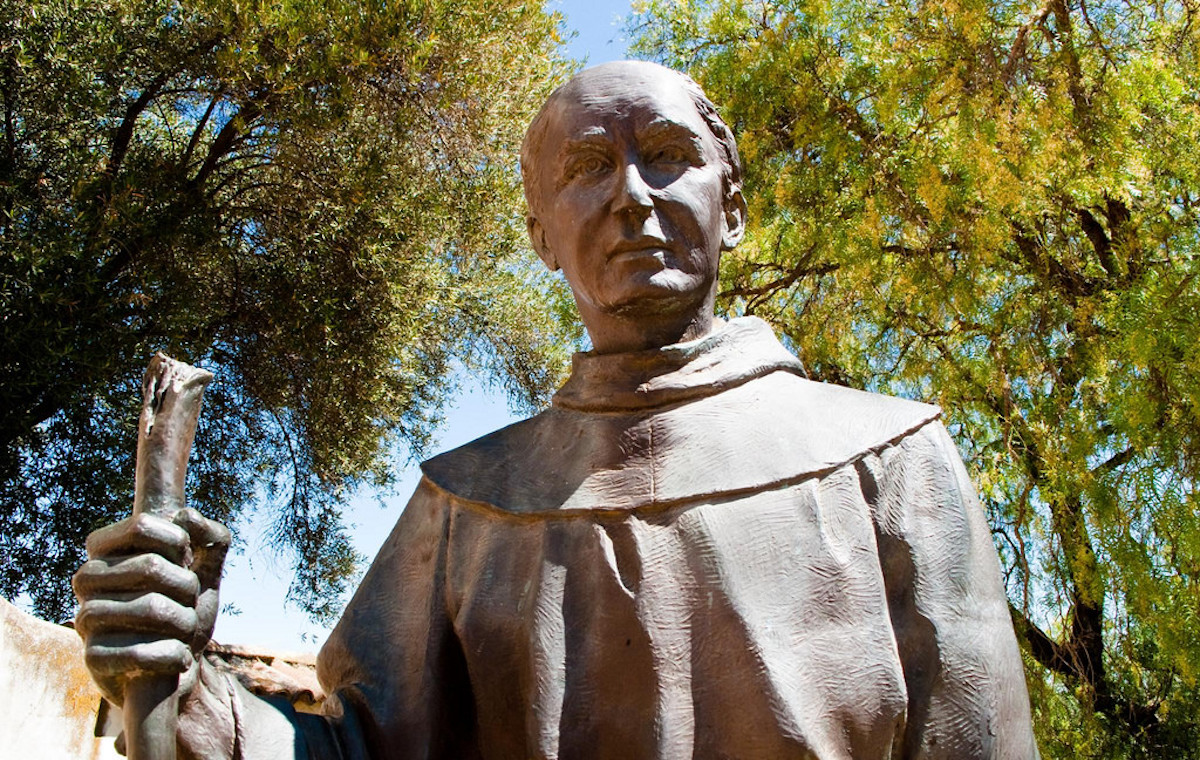 In recent weeks, protests against Confederate monuments have raised questions within the broader Latino community about monuments in the United States that honor the Spanish conquest. In the Southwest states, it’s not uncommon to see statues of Father Junípero Serra, statues and monuments for Juan de Oñate, a trail named for Juan Bautista de Anza and tributes to other conquistadores. In Florida, there are monuments for Juan Ponce de León and Pedro Menéndez de Áviles.

Hispanic Heritage Month, a government-designated celebration between September 15 and October 15, provides an opportunity to question the history of honoring the Spanish overlords, precisely because these conquistadores represent the European culture and customs that are celebrated with the month’s name.

Dr. Aimee Villarreal, a Chicana from New Mexico and assistant professor of Mexican American studies at Our Lady of the Lake University in Texas, has studied the Pueblo revolt and has written about Santa Fe’s Entrada pageant. She offered her perspective on the Spanish monuments in the Southwest and their symbols as responses to Anglo domination and the white supremacy that is based on the black/white binary.

“I think that we should be careful when equating statue of Robert E. Lee with that of Juan de Oñate, for example. They are similar, but not the same. The latter would not exist without the former. Statues of conquistadors and other glorifications of the Spanish conquest and conversion project in the Americas are particular to the history of the Southwest,” Villarreal told Latino USA.

“Claims to Spanish ancestry embody this ‘not quite, not white’ anxiety. Being racially ambiguous has been a benefit or a burden for people of Mexican descent. Some of us, those who are white-passing, have been able to use our European features and Spanish pedigree to gain a measure of acceptance in a racialized society that privileges whiteness and middle-class sensibilities,” she added.

Through history, some wanted (and continue) to align themselves with the Hispanic heritage of the settler colonists because it allowed Nuevomexicanos to convince Anglos that their language and culture were worthy of celebration. Villarreal says that this has enabled some to reject their Mexican origins and Native American ancestry.

Even de Oñate’s racial ancestry has been in doubt. There is scholarship to suggest that he was a descendent of Moctezuma II. And Oñate’s wife was of mixed indigenous and Spanish ancestry. de Oñate is infamous for having ordered the right foot to be cut off of some two dozen Acoma Pueblo prisoners in 1599.

Joshua Heckman, a Chicano doctoral student in American Studies at the University of New Mexico and activist, has been involved in the efforts to build solidarity with indigenous communities and has been critical of the monuments

“When it comes to the conquistadores, yes, that is part of our heritage. But that is not a heritage worth celebrating. We should recognize that heritage, but as Chicano, Chicana, Chicanx people, even when we have indigenous roots, we can still be complacent and perpetuate colonial violence. When we hold up figures like Oñate, we are holding up colonial structures of violence. I want to resist colonialism and be in solidarity with indigenous people,” Heckman explained to Latino USA.

Hispanic pageantry was on full display last week with Santa Fe’s Entrada reenactment of the late 17th-century “surrender” of the Pueblo Indians. To many critics of the conquistadores, this event centers the European colonial heritage and distorts what actually happened by claiming that it was a “bloodless reconquest.” In fact, native rivalries were exploited, and there was a violent resistance to Spanish rule.

For academics like Villarreal and Heckman, Hispanic Heritage Month is a time to critically examine the heritage, monuments, and events that are upheld as tradition. There is a growing consensus to challenge this legacy, especially given that these monuments and events center around European history and people who committed violent atrocities at the expense of indigenous peoples. The question remains: with the work that is being done throughout the Southwest, is it possible to share a more realistic narrative of the region’s colonialism and its vestiges that still exist today?