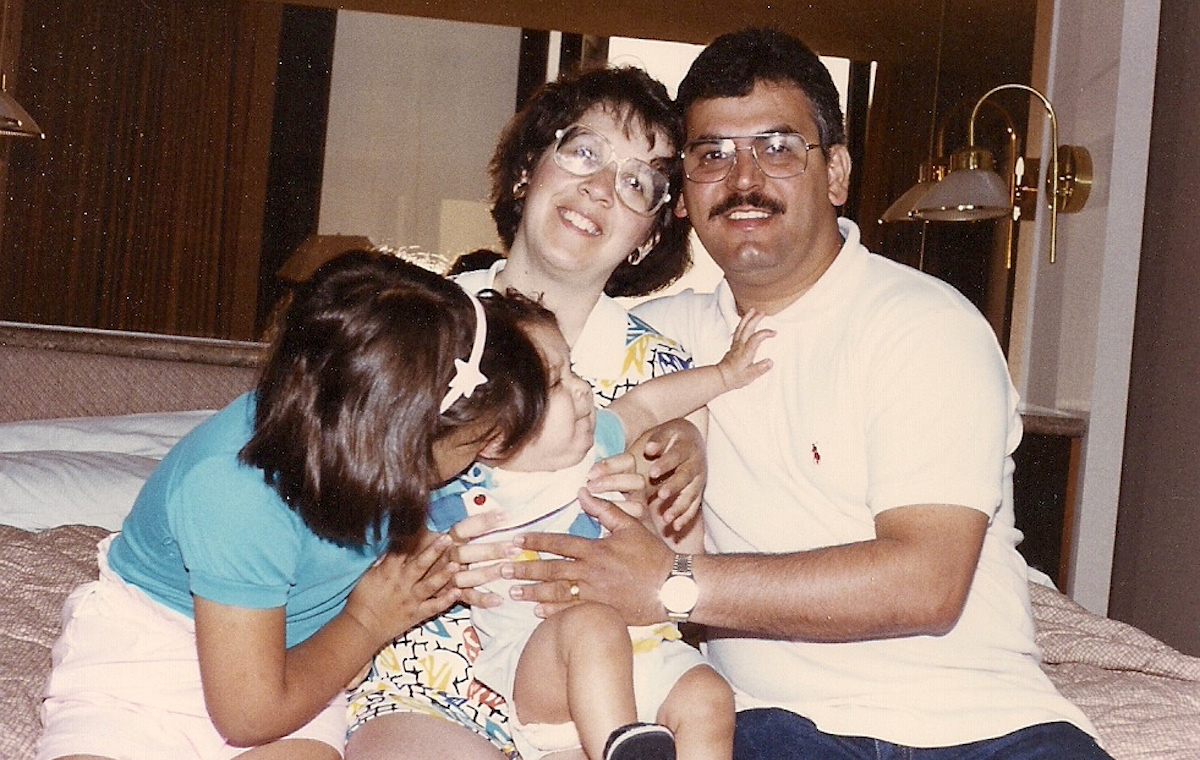 Producer Jeanne Montalvo brings this personal story about growing up in the South.

When we set off on our Southern Latino road trip, it only made sense to start at home. My family has lived in the South for around 30 years. My parents were born, raised and married in the Dominican Republic. They came to the states in 1980 on a scholarship to study English in Oregon, some 3,000 miles from their tiny island. When they arrived, they were accepted to a graduate program at Oregon State University.

My dad, Roberto Montalvo, finished a master’s degree in civil engineering there and my mom, Socorro Montalvo, a Ph.D. in chemistry. Once they finished, they were faced with the decision to go back to the Dominican Republic or stay in the country. Ultimately, they were able to stay with an H-1 Visa, and decided to move to Tampa, Florida. But when they got to Tampa, things weren’t as easy as they hoped they would be. Despite their flashy new graduate degrees, they struggled to find work.

“Every time I talked to a company that I needed to help me with my papers, I was shut down. So with a graduate school degree, a civil engineer, I worked in construction. But I had to put food on the table,” my dad says.

My dad worked construction at that time like many do: under the table. By the end of 1986 though, my dad got an offer from a company that was building a plant in South Alabama, and they were willing to process his visa. We moved to Brewton, Alabama, a small town near the border of Alabama and Florida.

The town had a population of about 5,000 and was the quintessential small town. Southern hospitality at its finest. Yet, at the time, we were the only Latinos in town. We found ourselves in a place that only saw Black and White and did not recognize anything in-between. Since my parents had “respectable” jobs, they were socially classified amongst the White residents, who were mostly well-to-do. But that didn’t shield them from the weird questions about Latinos and race, or the things they began to see. Once neighbors started telling them not to drive through certain areas at night, or to be careful what they said, the town started to lose some of its rosy tint.

“As a mother, you worry about the future of your children. How are people going to treat the first Latin girl in the whole town? I was also worried about you being discriminated against in high school. And I said, ‘okay, where is she going to belong’,” says my mom.

Eventually, we started noticing the segregation that existed in Southern Alabama. My mom first noticed it at the annual Blueberry Festival in Brewton, which is a huge deal in town and happens every summer.

“You ask the people around you, why are there not African-Americans in this festival. They would respond with, ‘Oh, they know their place.’ That means this is a white festival and is put together by the white community,” my dad says.

This was the late 80s. Alabama had desegregated (by law). No more Jim Crow. No more Wallace. The Civil Rights Movement passed, yet here my parents were being shown a different side from the people they knew. While they got accustomed to this new way of life, other things began to happen. My dad traveled quite a bit while we lived in this town, and on a random night my mother received a phone call from her cousin, who served in the United States Special forces for many years.

“He said, okay, I want you right now to get your kids, get in the car and start driving. He said, I’d heard on the radio band that there’s a KKK march going by your house. And I said, you can’t’ be serious. This is really a sweet town. These people really care for us. And he said, you’ll never know because sometimes they can love you, but you’re by yourself,” says my mom.

We left overnight and came right back home, but the scare had definitely left a mark for my parents. These were the little things that started to signal to my parents that they’re tenure in this small town in Alabama was coming to a close. We lived in Brewton for five and half years. In that time, we can’t say we physically saw any manifestations of these hate groups in town— aside from the symbols, such as things being spelled with a K or street signs graffitied with the words KKK on them. But we never once saw someone in a white hood. At the same time, my mother knew of students who attended white supremacy meetings. Had we not driven out that night, who knows what we may have seen.

So in 1992, my dad requested a transfer to Atlanta, Georgia, where we were still one of few Latino families in the area. We were fortunate to experience the 1996 Olympics, which led to a boom in the Latino population. When the construction began, there was an offer to donate $25 dollars and you could get a brick with your name put in a path at Centennial Olympic Park, which was being built at the time. My parents bought one for my brother and I, and we now have our names ingrained in the park amongst the many other Atlantans that came together during these historic games.

“It was like a symbol for our family. We felt it was more significant for the kids than for us. We wanted to them to feel at home, and feel like they belong. They were born here. Like, ‘this is your city, your country’,” my dad says.

My parents have always been very adamant about us being Americans. They wanted us to have more and be able to do more in this country. They followed their American Dream to get here, but the reality of what their kids could potentially achieve was very important to them. The hope of most immigrant families, to see their children go farther than they ever could, and that meant coming to the U.S. and raising their kids here.

While my brother and I have taken different paths, my parents have now lived in the metro Atlanta area for 25 years and love the South.

“It’s like I grew up in Santo Domingo and people joke a lot about all the Latin that everything is just manaña. The Southern way is very similar. It’s a more slow-paced life,” says my dad.

Atlanta now boasts a large Latino population, and my parents have groups of friends from all over Latin America. What was once a small city that wished for international recognition has now become a giant metropolis. Atlanta is known as the “Hollywood of the South,” with movie studios popping up left and right and also has the world’s busiest airport. It offers the best of a big city with the slow pace of the South that my parents have grown to love.

While things have been sweet in the last few decades in the land of Georgia peaches, the last year has proved to bring new challenges as the new administration has awakened racial tensions that were once only said in whispers. But that, is a story for next week.