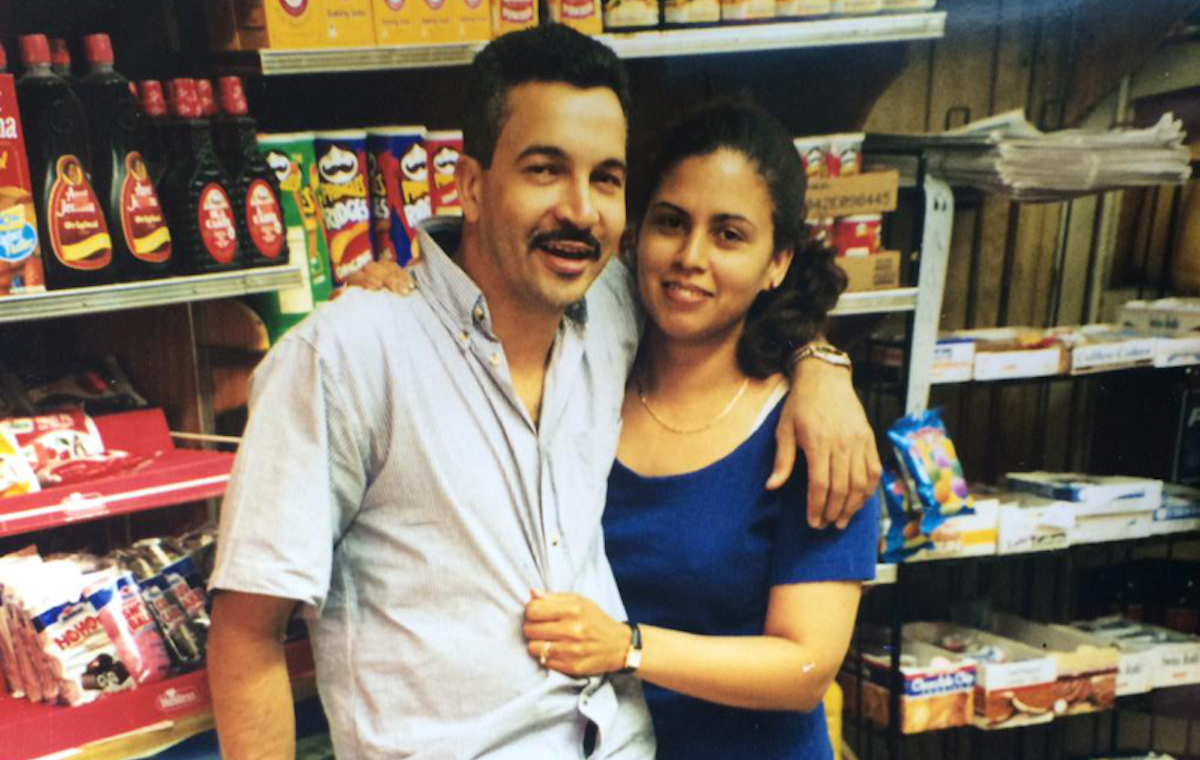 Freddy and Damaris Castillo in the bodega that Freddy, Amaris' father, worked at in the '90s, located in Flatbush, Brooklyn, New York City. (Courtesy of Amaris Castillo)

My parents have worked in bodegas since before I nestled in the womb. As a young girl growing up in Brooklyn, the bodega taught me the power of owning your personal narrative, especially for people of color and immigrants who feel marginalized elsewhere.

Many of the customers who stepped into the Flatbush bodega my father worked in would, after buying their usual, stay longer to exchange animated banter with him. I recall hearing what felt like an endless stream of stories of struggle and hope.

I learned very early on in life that a bodega is much more than a store, but a space where community happens. In a society where immigrants are made to feel less than —especially in today’s climate of Internet trolls and alarming decisions passed down from the White House— bodegas are spaces many turn to for comfort.

People go to a bodega to search for jobs, or to find someone they’d like to pay to do a job. They go for referrals and for directions. My family moved to Florida when I was 15, and my parents eventually opened up a bodega named Orlando Latin Market in St. Petersburg, the state’s fifth-most populous city. Some customers stop by their store simply to use my father’s produce scale to weigh care packages meant for Cuba. Try doing that at a regular supermarket.

I’ve watched my father —a seasoned and exhausted bodega owner— go the extra mile to make customers laugh with his famously corny jokes.

“Are these good?” customers have asked my dad while holding up avocados from his small produce section.

“Yeah, they don’t bad-mouth anyone,” he always replies, his mouth spreading into a grin. As if on cue, laughter then fills the store.

Can the Bodega startup that unleashed outrage last week bring out a moment like this?

Last Wednesday, I sat perplexed in front of my laptop and read how Paul McDonald, a former product manager at Google, has launched a new concept with co-founder Ashwath Rajan, also a Google veteran. These pantry boxes are filled with items that one might pick up at a bodega and an app will allow you to unlock the box. Cameras powered with computer vision will then register what you’ve picked up and automatically charge your credit card, according to the Fast Company article.

From beginning to end, you’re on your own as a consumer and, to add salt the wound, the co-founders are calling it Bodega.

The anger by those who recognize bodegas for what they really are —the backbone of many communities— was swift and the co-founders have since issued an apology.

Hopefully they’ve learned the great pride many bodega owners have in the service they provide—one that their customers can’t find easily since small businesses have increasingly fallen victim to big-box stores.

Competition is fierce and everyone’s trying to turn a profit, but we mustn’t forget about community.

These beloved spaces have sustained my family and many other families for decades. The bodega, as insignificant as it may be for some, paid for my graduate school education at an Ivy League school.

So strong is my love for bodegas that I even have a project dedicated to them called Bodega Stories. Launched in 2015, the multimedia series features the personal stories of those who work in and frequent bodegas. I began Bodega Stories by interviewing customers at my parents’ business in St. Petersburg, Florida, and have since expanded the project to New York City and Honduras (thanks to the support of the International Women’s Media Foundation<).

I have spoken to former political prisoners from Cuba, a Dominican mother of four who dreams of opening up her own business, and a Honduran man who spends his time outside a corner bodega, reading troubling newspaper headlines about his country.

It’s my small way of giving back to a place that has given so much to me.

May we always revere bodegas for the integral role they play, as much as some may try to reinvent them.