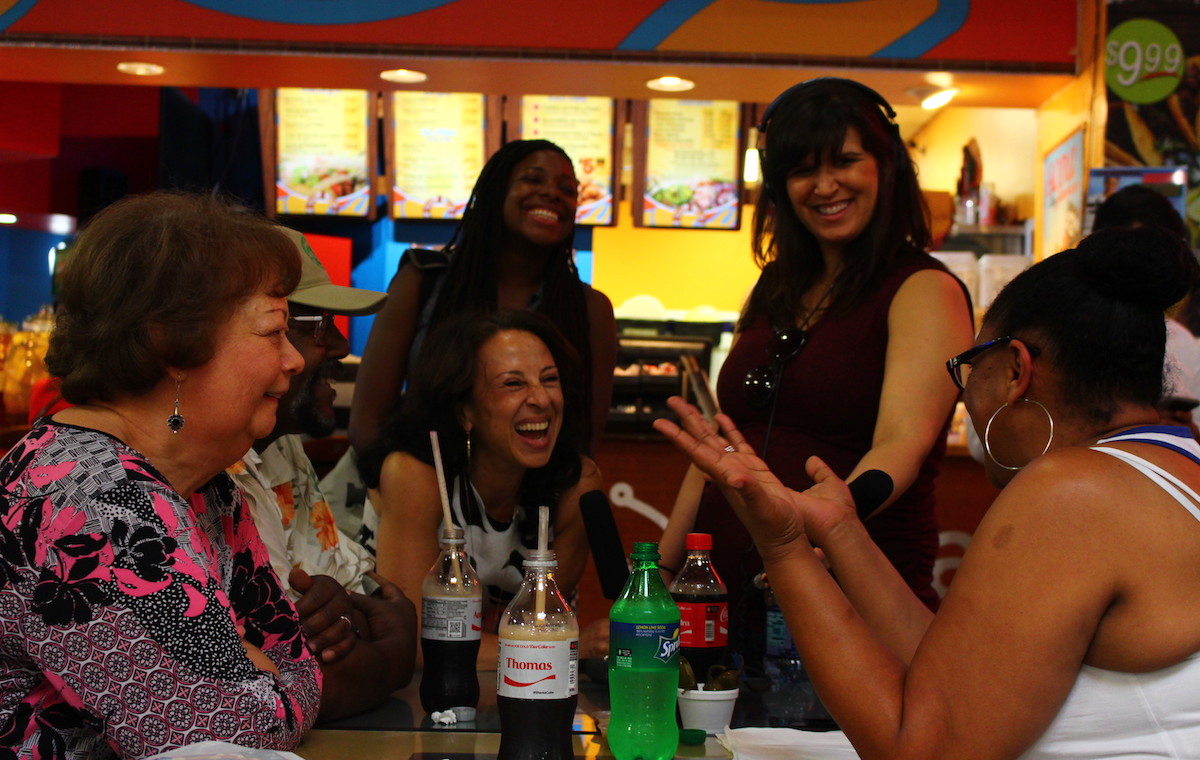 Latino USA speaking with the Brown family in the food court at Plaza Fiesta on their views of why the mall is such a great place for the area of Atlanta. (Jeanne Montalvo and Yurema Perez Hinojosa/Latino USA)

In a special two-part radio series, Latino USA hits the road through Georgia and Alabama to learn what it’s like to be Latino and Southern today. Host Maria Hinojosa, producer Zakiya Gibbons and I drove 1,000 miles with stops from Atlanta, Georgia to a small town in Southern Alabama. We spent time in states that have passed some of the strictest immigration laws in the country in recent years, yet have some of the largest Hispanic population growth rates in the nation.

In this series of images, meet some of the faces and places we came across along the way.

Maria tries to be a copilot as we made our way through Northern Alabama. We were in the middle of shooting our own film, “Driving Ms. Hinojosa.”

A series of quinceañera dresses were on display at one of the main entrances to Plaza Fiesta in Chamblee, Georgia. Doesn’t everyone need a place where you can buy a quince dress and grab some amazing tacos at the same time?

Maria stands in front of the statue of former Atlanta mayor Andrew Young in downtown Atlanta with the Mexican representatives of the International Rotary Club, who are visiting for their annual convention.

The ceiling of Plaza Fiesta in Chamblee, Georgia is lined with papel picado as we made our way to the food court to speak with restaurant owner Carlos Chavez.

The team speaking to one of Carlos Chavez’s employees in the kitchen of his restaurant in Plaza Fiesta about his experiences in Georgia.

Maria stands in front of Mi Pueblo Supermarket in Pelham, Alabama after we enjoyed lunch at their buffet and interviewed Dulce Rivera, the daughter of store’s owner, about her family.

We saw a girl kneeling to pray in Church of the Holy Cross in Albertville, Alabama after Father Raul took us on a tour of the grounds.

Beverly Stark, my family’s old neighbor, holds her puppy after her we interviewed her for Latino USA. As you can see in the background, it’s eternally Christmas at the Stark household.

Listen to part one of the two-part series of “Southern Roadtrip.” Part two will be released Friday, September 22.