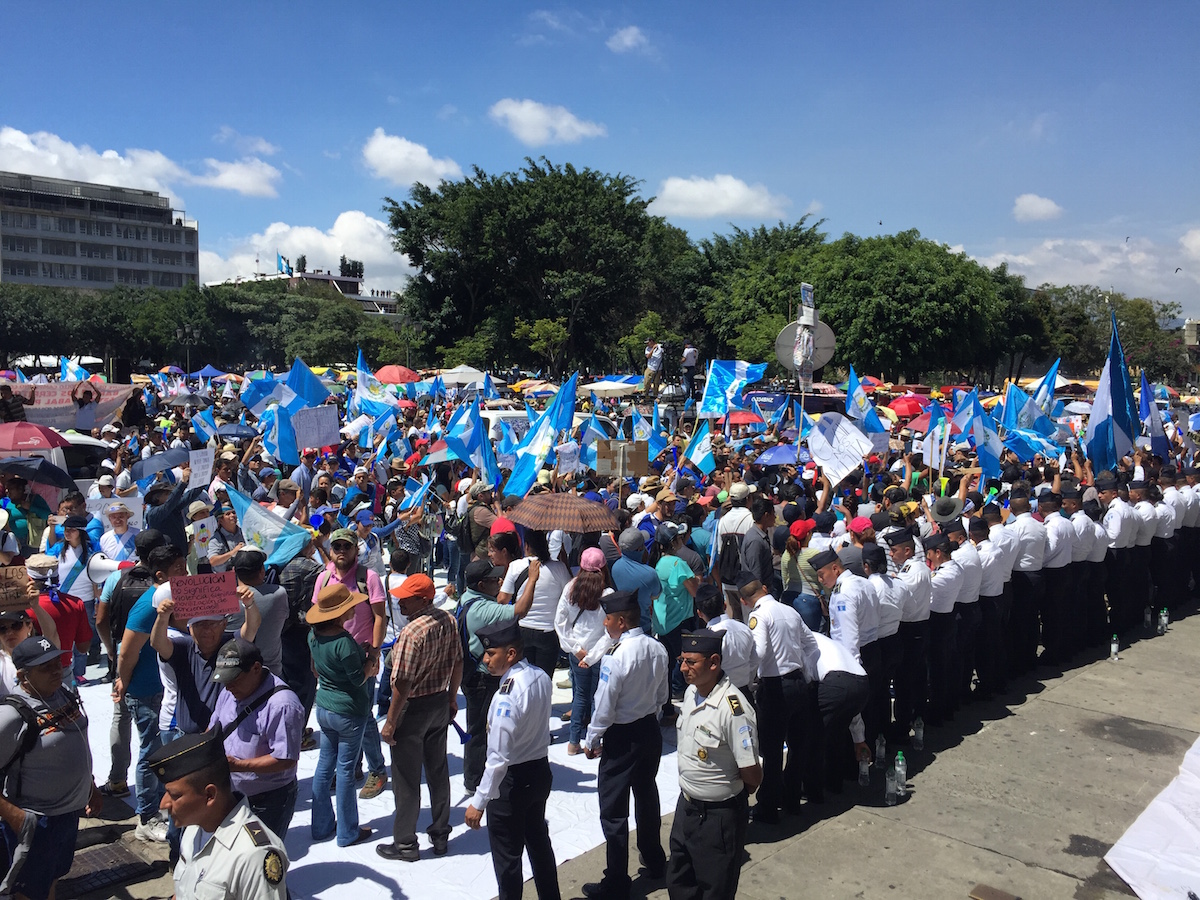 GUATEMALA CITY — Weeks after mounting political turmoil, hundreds of thousands of Guatemalans skipped work and school on Wednesday and flocked to the capital’s central plaza to participate in a national strike  or “paro nacional” against corruption and impunity.

Protesters —including students, teachers, farmers, nurses and business leaders— demanded that President Jimmy Morales and 107 congressional leaders, who voted for a controversial changes to the Penal Code, step down immediately.

Various groups, including the public and private universities located in the capital, marched from different areas of the city, blocking traffic between 8 a.m. and noon. A sea of blue and white, the colors of the flag, covered central plaza or Plaza de la Constitución, and in front of the Palacio Nacional de la Cultura. Protesters cheered and danced for over 10 hours, even after rain started pouring in the evening.

“The strike is an expression of how tired we are of the corruption,” José Pérez, president of the Academy of Mayan Languages in Guatemala, told Latino USA. “This system is no longer working for us. It is only working for the politicians and those who buy politicians.”

The drumming, chats and buzzing suddenly stopped around 6:30 p.m. when protesters starting singing the national anthem. In the end, about 148,000 people participated in the national strike, local media reported.

Aura Gapita Suárez, an elementary school teacher, kept jumping and using a small plastic horn while it rained. She said she got energy from the frustration she said she feels against politicians who seem to be more interested in getting rich than providing basic programs to the people.

“We don’t want to be slaves to these corrupt politicians,” Suárez said.

Tensions between the government and an anti-corruption panel led by the United Nations has been growing for a while and it intensified last week after Congress voted to modify the Penal Code. The changes waived politicians’ responsibility over campaign contributions that come from illicit sources and they can avoid prosecution, according to Prensa Libre.

The measure also allowed many criminals serving sentences less than 10 years to walk free in exchange for a small fine.

The change in the penal code has been seen by many Guatemalans as a move to protect politicians from the possible outcome of any of the investigations by the United Nations’ anti-corruption panel, The New York Times reported.

Iván Velásquez, a Colombian prosecutor who leads the anti-corruption panel, and Attorney General Thelma Aldana said the president’s party was under investigation over campaign finance irregularities. President Morales was the secretary-general of the party during the 2015 election and was responsible for the party’s campaign finances, according to the Times.

Morales, a former television comedian, reacted by ordering the Colombian prosecutor to leave the country. The political turmoil continues to grow after the country’s congress voted to grant immunity from prosecution last week, Prensa Libre reported.

President Morales has denied any wrongdoing. On Wednesday night, his administration issued statement where the president said he wants to start a committee to start a dialogue to figure out a way to resolve the national political crisis.

Brenda Ponzón, a teacher who participated in the strike, said it will take a lot than a dialogue. Protesters won’t settle for anything else less than getting the president and legislators to step down.

“We have to unite and stand up against corruption,” Ponzón told Latino USA. “I’m no longer afraid of the corrupt. I’m more afraid of the silence from good people. We have to speak up.”

For Julissa García, a university student, the strike is a civic responsibility. García said Guatemalans have to speak up against corruption.

“It saddens me to know my country has so much corruption but we can fight against it together,” she said.

The 21-year-old said Wednesday’s national strike was stronger than the strike from two years ago that led to President Otto Pérez Molina’s resignation and faced a number of fraud charges along with many of his cabinet, according to The New York Times.

“We are stronger than ever,” she said.