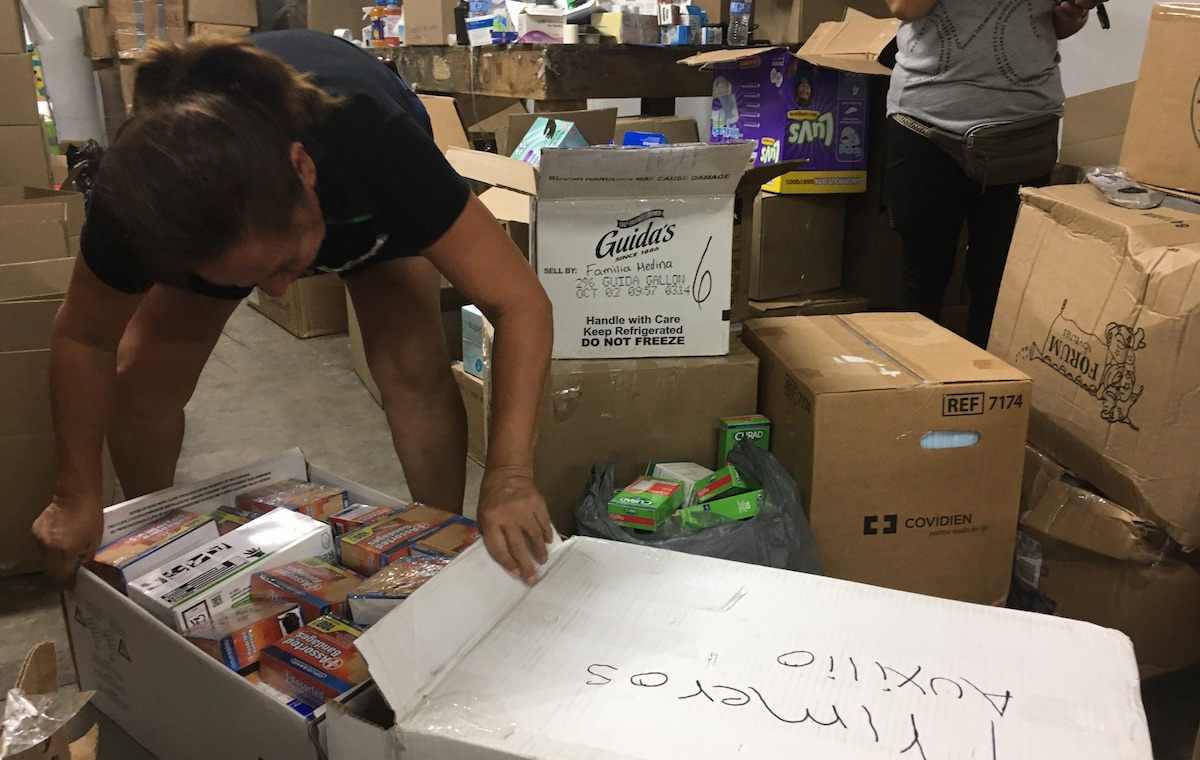 PASSAIC, NEW JERSEY — About 20 people sort bandages, cans of black beans, and packets of baby diapers in the back warehouse of Mercado de la 8, a Oaxacan-owned grocery store. They pack them into carefully labeled boxes, stack the boxes onto shipping pallets, and wrap the packages in plastic wrap.

Over the next few days, the pallets will be flown to communities in Mexico devastated by the series of powerful earthquakes that have recently shaken the country. They are part of an enormous civil society response that has extended from the state of Oaxaca, to Mexico City, to Mexican immigrant communities across the northeast United States.

Gabriela Pérez is one of about 150 volunteers who have kept the warehouse bustling each day, from eight in the morning to almost midnight. Pérez grew up in Oaxaca, the southern Mexican state most affected by three of the four earthquakes that occurred over the last three weeks. She’s lived in the United States since the 1980s. Late at night on September 7, shortly after the 8.1-magnitude earthquake hit Oaxaca, she was woken up by a flood of phone calls, asking if her family in Mexico was safe.

Pérez’s hometown of Zaachila was largely spared, but she wanted to help her home state. She contacted César Aguirre, who owns Mercado de la 8 and is also from Oaxaca. Aguirre set up a box outside the grocery store with a handwritten sign asking for donations, and Pérez started making calls.

“I love my country,” Pérez said. “As a Oaxacan, I asked people to help.”

More than 800,000 Mexican immigrants live in the tri-state area, and Oaxacans are one of the largest groups. Within a few hours, the box outside the store was overflowing, and community groups throughout the Northeast were setting up drives of their own.

Many of the organizers knew each other from Oaxacan cultural festivals called guelaguetzas and from community radio stations. Felipe Santos, one of the leaders of the donation drive in Poughkeepsie, said cultural celebrations have helped bring immigrants in these far-flung cities together.

“The Oaxacan community has been more visible in the tri-state area over the last two or three years, because of the guelaguetza,” Santos said. “Now we’re working on showing that we Oaxacans have much more to give.”

In the week after the first earthquake, organizers from Poughkeepsie and New Brunswick to Staten Island and East Harlem collected blankets and first aid kits at homes and community centers. Then, they dropped it all off at Mercado de la 8. By the end of the week, the group had almost 14 tons of materials, including tents and camping gear for people whose houses collapsed.

“Each tent we get, that’s one less Oaxacan sleeping outside, on the street,” Aguirre said.

Aguirre and his fellow organizers are working with the Oaxaca state government to deliver the materials to communities in need of relief. The first two tons were sent a week ago on an Aeroméxico flight, using cargo space donated by the airline. The rest is being sent gradually. Volunteers are traveling with the donations, which will be distributed by the Mexican military.

When the first load touched down in Mexico City for a layover, it was delayed by the 7.1-magnitude temblor that hit Mexico City and surrounding states on September 19. As people watched videos of buildings collapsing and learned about the growing death toll, interest in the fundraiser exploded.

“We stepped up our efforts, to help other states,” Aguirre said. He said the group will focus on sending relief to communities outside Mexico City, which has more resources.

The donations have poured in, more than doubling what the group collected the first time. Organizers estimate that more than a thousand people have donated, and their growing crew of volunteers is scrambling to keep up.

The group is still determining how to distribute the goods to affected communities outside Oaxaca.

Secretary of Foreign Affairs Luis Videgaray visited the store on Saturday afternoon. During a press conference, he said the Mexican government will work with the organizers to transport and distribute the donations.

“This is an effort by civil society, by the people,” Videgaray said. “I’m proud to see my countrymen here in New Jersey, just like those in Mexico City, Chiapas, and Oaxaca, giving their all to help other Mexican people in need.”

According to Aguirre, working with the federal government would help get the items through customs more quickly. “We don’t want the materials to sit here while there’s an emergency in Mexico,” Aguirre said. Volunteers have offered to travel with the shipments to make sure they are distributed properly to communities with the greatest need.

Donations keep coming, and the organizers plan to keep taking them indefinitely. “It’s getting away from us,” Aguirre said. “We have to get boxes, tape, markers. We haven’t been prepared, because this isn’t what we normally do, you know. We’ve had to improvise.”