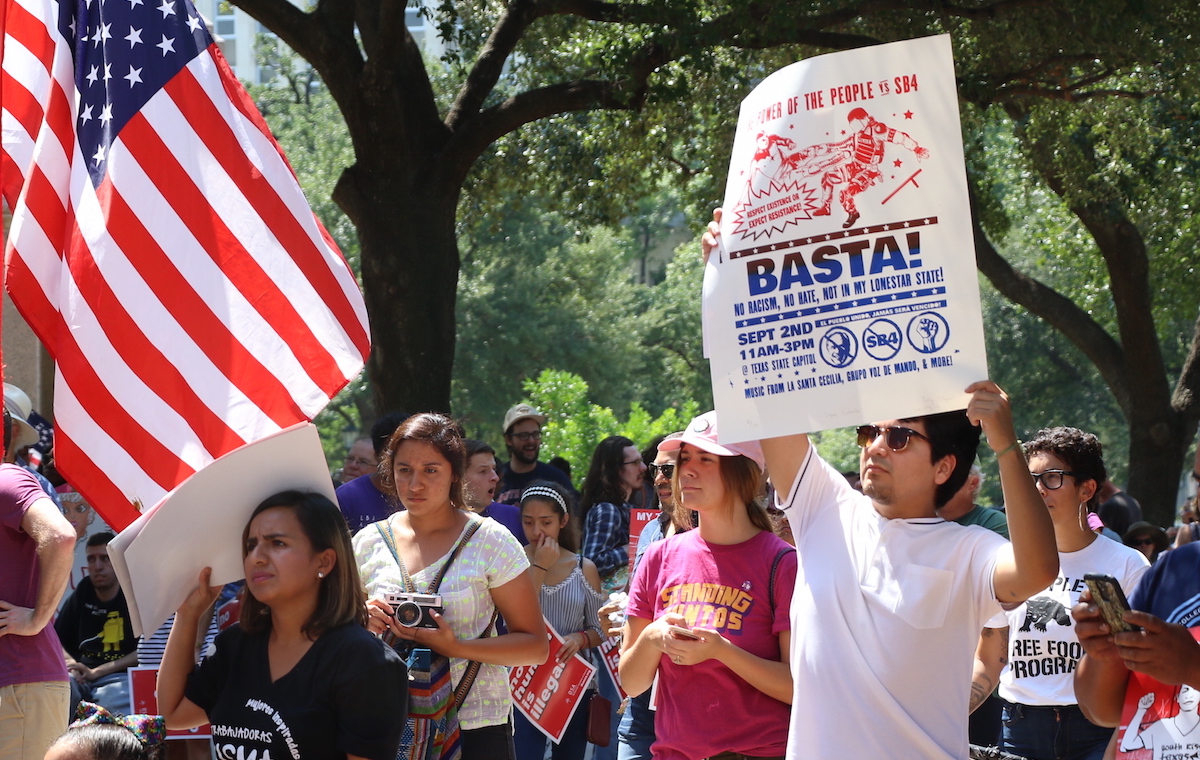 Jolt member Jerry Silguero holds up an anti-SB4 sign at the Unity Concert and March to protest SB4. The event was held Sept. 2 in downtown Austin. (Courtesy of Jolt)

The ruling, made by a three-judge panel of the Fifth U.S. Circuit Court of Appeals in New Orleans, allows parts of the law to go into effect, including prohibiting local law enforcement from preventing its officers from cooperating with immigration authorities and requiring jails to hold immigrants in their custody for immigration authorities.

Opponents and supporters of the bill interpret the latter ruling differently.

Supporters of the bill continue to argue it will keep criminals off the streets. Opponents say it can lead to racial profiling and break apart families.

The ruling caused Travis County Sheriff Sally Hernandez, who came under fire from state leadership earlier this year for standing her ground and ignoring detainers placed on many inmates housed at the Travis County Jail suspected of living in the country without authorization, to change her policy and honor all immigration detention requests placed on inmates. Hernandez previously honored detainers when inmates were charged with murder, aggravated sexual assault or human trafficking while others were considered on a case-by-basis.

“As I have maintained throughout this process, I have not violated federal or state law, nor do I intend (to),” Hernandez told local media. “Our policy has been updated to comply with the finding of the Fifth Circuit Court of Appeals.”

The decision is disappointing to immigration advocates in Texas who counted on Hernandez to stand with Democrats against a majority Republican state leadership on this divisive issue.

“It is massively disappointing for us to see our sheriff, who had such a strong stance on this, reverse her position,” said Cristina Parker, communications director for Grassroots Leadership. “She got some bad information from [Texas Attorney General] Ken Paxton and other sources.”

Penalties for violating SB4 include jail time and fines of up to $25,500 per day. Elected officials found in violation of the law could be forced out of office.

Republicans: Courts on Texas’ Side

Soon after the ruling, Paxton issued a statement where he referred to Senate Bill 4 as a “common sense measure” that prevents Texas local governments from blocking federal immigration law.

“Enforcing immigration law helps prevent dangerous criminals from being released into Texas communities,” he said. “I am confident Senate Bill 4 will be found constitutional and ultimately upheld.”

Parker maintains that the decision to honor ICE detainers is still a voluntary option for local law enforcement and believes it to be in violation of inmates’ constitutional rights.

“Our interpretation of the ruling is that the policy that applied to detainers before still stands. Sheriffs and counties can decide on a case-by-case basis whether to honor detainers,” she said.

She is not alone in her interpretation. Luis Vera, an attorney for the League of the United Latin American Citizens, says the ruling is much ado about nothing and expects the case to head all the way to Supreme Court.

“[U.S. Attorney General] Jeff Sessions and Ken Paxton put out these statements of great victory and nothing happened,” Vera told Latino USA. “The order is about five-and-a-half pages long and it’s a very generic, ambiguous document.”

Vera said the ruling means federal detainer requests will function in much the same way they did before Senate Bill 4 took center stage.

“There’s not a single jurisdiction in Texas, not a single county, not a single city, that has ever not honored detainers,” Vera said, adding the only caveat was Travis County which had already updated its policies prior to Hernandez’s announcement following Monday’s ruling.

“The only one who can change that policy is Congress,” he said. “Congress would have to create a new law regulation signed off by the president.”

At its core, the case is a fight for state government to have control over local government, which Vera pointed out is ironic considering Texas is known for fighting for a certain level of autonomy from federal government.

He said Paxton and other Republicans’ statements, referring to Monday’s ruling as a successful step forward for them, is at best a public relations stunt.

“Bottom line is nothing happened. That’s why I call it a paper tiger,” Vera said.

That stunt may be forcing the immigrant community to strategize ways to be proactive instead of reactive. Whereas, some Latinos may be plagued with fear, anxiety and confusion, others are taking ownership of their future.

“Bottom line is the fight against SB 4 and racism is not just going to be fought by the courts, but by exercising our collective power at the polls,” said Cristina Tzintzun, executive director of Jolt, a Latino civic and social organization. “SB 4 has also brought the Latino community, from fifth-generation Texans standing together with DREAMers, it has started a dialogue with the community. I think it is important, no matter what happens with SB4, that people of color understand their role in society and what decisions impact our community.”

A final ruling will be issued once a separate Fifth Circuit panel hears oral arguments November 6 on the state’s motion to allow the entire law to go into effect. Like Vera, other legal experts expect the law to head to the Supreme Court.