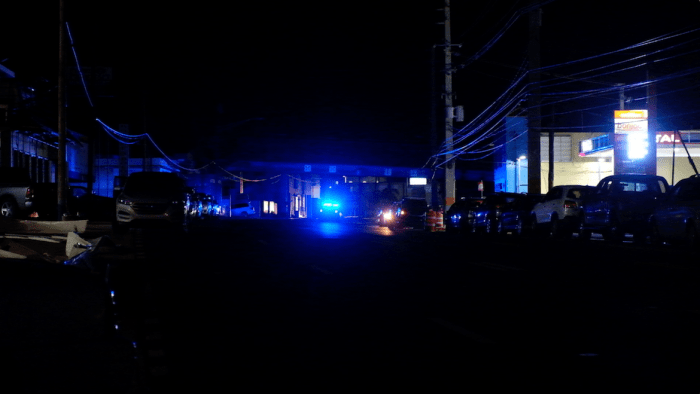 Photo by Center for Investigative Journalism

SAN JUAN, PUERTO RICO — “I don’t know that,” was the answer from Puerto Rico’s Public Security secretary, Héctor Pesquera, when asked about how many people have been detained in the Island’s prisons after being processed for committing a serious crime, and not being able to post bail during the curfew period declared over a week ago by Governor Ricardo Rosselló after Hurricane María hit Puerto Rico.

Someone else who is not clear about how many people have been jailed for such a transgression is Erik Rolón-Suárez, Secretary of the Department of Corrections and Rehabilitation. In a conversation with the Center for Investigative Journalism about whether people have been admitted to the criminal system he directs during the past week, Rolón said he could corroborate the number, but when asked about the exact figure, his response was that he had to review in each jail, file by file. “I’d have to corroborate it.”

Something that the Secretary of Corrections could confirm was that the inmates have not been able to make calls to their relatives since María passed. Rolón-Suárez said the department had approved two free calls before and after the hurricane, but because of the collapse in communications that second call had not been possible.

According to official figures, as of last Friday, police had intervened with 125 people for curfew violations, of whom 67 have been arrested. The agencies’ press spokespersons have been unable to explain which of these arrests have resulted in citations and which in jail sentences.

Pesquera said the intervention protocol “is like any ordinary arrest.” The person is arrested and taken to the nearest police station to record the arrest. It is then presented to a magistrate, and it is determined whether there is cause for arrest. In the event that the offense is only a violation of the curfew, the procedure in force is a court summons. If the accusation is a felony —as is the case when a break-in takes place during the curfew, for example—  the magistrate imposes bond. If this bond can not be paid, the defendant is jailed. The Secretary of Public Security said those arrested have been admitted into prisons closest to the place where the crime was committed. However, he was also unable to reveal which those prisons are. He affirmed that the constitutional rights are being guaranteed because Puerto Rico “is a place of law and order.”

The Puerto Rico Police, at the national and municipal levels, is the body authorized to make arrests. Jointly with the military, a Peace Officers Corps also certified by an Executive Order passed on September 28. These Peace Officers, as they are called in the order, are “federal law enforcement officers who have the power to make arrests and are in the performance of their duties.”

“A ‘Peace Officer’ is a concept. What they do is that through an executive order the visiting officer is admitted so they can exercise functions as in their local state. Because a police officer in New York can not necessarily practice in Puerto Rico with the same legal protections of the state. In that sense, when an emergency happens, they are recognized as a local officer to perform the duties delegated locally,” was the definition offered by Karixia Ortiz, press officer for Héctor Pesquera.

William Ramírez, executive director for the Puerto Rico Chapter of the American Civil Liberties Union, was alarmed by police interventions related to the curfew and said he has already received calls and text messages from people close to him about people who were arrested, denouncing the situation.

“I have received notifications. They are arresting people and they are not notifying where they are taking them and they are not offering bail, which is unconstitutional. This is headed the wrong way. When there are emergency situations, [citizens] are willing to give up a lot of rights. An emergency cannot be used as an excuse to suppress people. That can become the new standard and we will not allow that,” he said.

Ramírez also questioned that the curfew was undefined. As he said, a curfew “is a response to an immediate, imminent and defined situation. For a short period of time. When you say indefinite curfew, that’s martial law.”

For his part, Osvaldo Burgos, a law professor and chairman of the board of directors of the Puerto Rican chapter of Amnesty International, lashed out at the government and deemed the matter as “dangerous.”

“The state’s last alternative and here it was the first, without pondering other alternatives and their effects. People do not question it. They accept it, because they are afraid, and that is dangerous,”Burgos said.

Someone who concerned about the criminal procedure being followed is criminalist Javier Santiago-Santos, an attorney who questioned the transparency of the protocol within the island’s current conditions: communications devastated by the scourge of a hurricane with winds of more than 155 miles per hour; family and legal representation without the ability to communicate and a court system paralyzed without power.

The lawyer also warned about the justice system’s lack of experience with this issue. “It’s there, and it’s up to the state to do whatever it wants to do. What about people who they detain within the curfew? We don’t know. We are talking about very new issues. None of this has been resolved by the Supreme Court. There is no jurisprudence,” he said.

At the moment, courts are operating on a limited basis, from 10 a.m. to 4 p.m., and only those in Caguas, Mayagüez, Arecibo and Aguadilla are open. Because of the emergency, the judicial branch is also operating out of police headquarters, the agency notified in a press release.

The island-wide curfew was declared 24 hours after Hurricane María made landfall in Puerto Rico, following several alleged incidents of vandalism and looting reported by the few radio stations that remained on air. The latest version of the executive order was announced Friday, September 29, and now forces citizens to be in their homes from 9 p.m. to 5 a.m.

The document that accompanies the order says the curfew is effected “to save lives and protect the property, health and safety of all our citizens,” pursuant to Act 211 of 1999. The latter was signed by former Governor Pedro Rosselló to “grant extraordinary powers to the Governor in emergency or disaster situations.” His son, now Governor Ricardo Rosselló, is the first to invoke it to enact a curfew. There are some municipalities that have similar provisions in their public order codes.