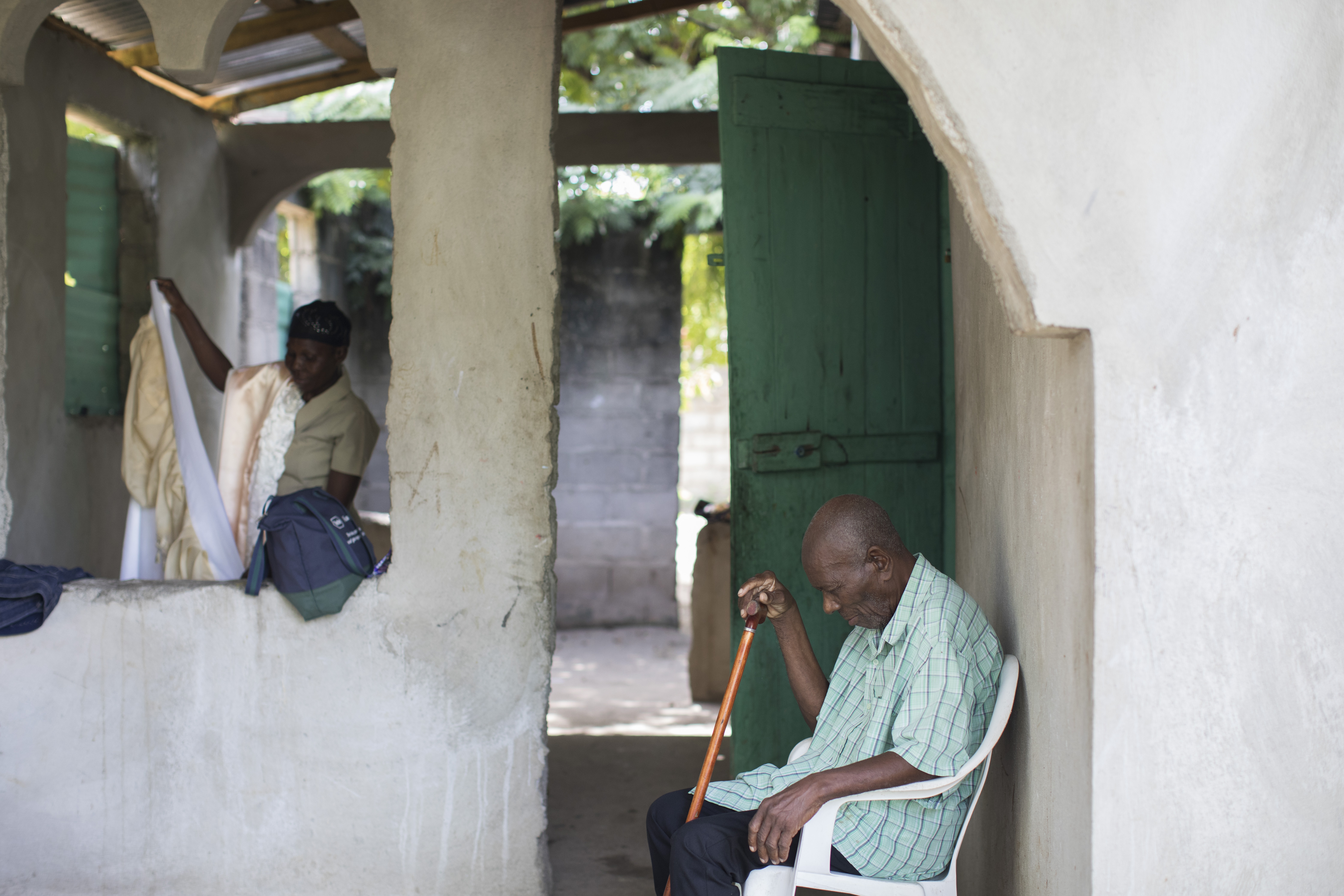 Francisco Pierre, 90, a survivor of the 1937 Massacre, sits in his home, Monday, June 26, 2017 in Ouanaminthe, Haiti. His daughter, Roselaine Pierre, stands in the back. (Latino USA/Tatiana Fernandez)

Exactly 80 years ago, the army of the Dominican Republic under military dictator Rafael Trujillo perpetrated a massacre, and almost got away with it.

The army went town to town in specific parts of the country, mostly in the Northwest border region, and ruthlessly slaughtered Haitian families as well as Dominicans of Haitian descent. Afterwards, the government claimed it had nothing to do with the massacre, and that the killings were just local Dominican farmers rising up against Haitian thieves. There was some international uproar at the time, but Trujillo never admitted his crime, although he did pay an indemnity to Haiti under pressure from the United States.

Nowadays, the country acknowledges the massacre, commonly known as the Perejil Massacre, but there are still details of the massacre we don’t know about—for example, the number of dead (estimates range from 30,000 to less than 1,000).

One of the reasons that there are pieces missing from the narrative is that nobody could investigate what happened while Trujillo was in power—for over 20 years after the event. Afterwards, researchers began traveling to the border to try and piece together what happened, and conducted interviews with survivors.

Now eight decades after the massacre, only a handful of survivors are still alive to tell their story. A few months ago, Latino USA producer Marlon Bishop traveled to the D.R.-Haiti border to research a radio special commemorating the anniversary of the massacre. While he was there, he interviewed Francisco Pierre, one of those survivors.

We met Francisco through his grandson—Steveson Pierre—who was working with Marlon as fixer. Francisco lives in Ouanaminthe, Haiti, just over the border. He’s 90 years old, mostly blind, and can’t move easily. But he remembered the massacre as if it were yesterday. His testimony is a powerful reminder of a historical event that will soon be beyond living memory.

I was born in 1927 in Loma de Cabrera. It was on October 5, 1937, when a Haitian man we knew passed by our house, where we were sitting, and yelled to my uncle.  My uncle’s name was Hortemer. He called out, “Temer, Temer, Temer! You have to go across to Haiti right now.  Figure it out and jump across to go to Haiti right now, because they are killing people in the village.” That was in Lomo de Cabrera.

He told us to go up past the cemetery so that we could hear the cries of the people in the village. And so we went up further to hear, and sure enough, the village was boiling with noise.

That Monday, my grandfather had gone to kill some animals. He used to kill farm animals for people in the village. He came back with quite a bit of meat. My grandmother used to fry it in a big pot for us to eat the rest of the week. Once we had heard about the killings, we loaded our donkey. Next, my grandmother tied her meat-filled pot to the top of her head.

When we arrived to a town called Bwa Rouge, we got to the home of a man named Limina. He was making cassava. By then it was six o’clock. Limina was blind, just as you see me. With his cane, he would pat, pat, pat his way on the road.  So we were off.

At the time there weren’t big roads like today. It was smaller roads. We arrived at one called Carrefour Cha Cha, which goes from Dajabon to Davi. When we arrived there, everyone said, “Which way do we go? Which way do we go?” Limina said, “I will be taking Grand Pas,” by which he really meant he was going to Dajabon.  We were taking a little road to a place called Chevalier.

We were walking with a woman who knew Limina. She had two donkeys filled with cargo, and we had one. When we reached the crossroads, she said she was not going by way of Dajabon. She was going to take the other path with us. It my grandmother, me, another boy, and the woman.

The Haitian Woman and the Dominican Boy

Some time ago, the woman [we were traveling with] had a Dominican kid that she had done a good deed for. The kid was sick, and his father had sent him into town on a horse to sell some goods. While he was on his way, he fell off his horse and landed in front of this woman’s house. She brought him in and treated him with homemade medicine.

She asked him, “What’s your father’s name?” He said, “My father is so-and-so,” a Dominican. She said, “I would go and find your dad, but I don’t know where he lives.” The boy suggested, “Put the horse on the road from which I came. Hit his side and he will go directly home.” So they sent someone on the horse to his father’s house.

When the Dominican saw his horse approach, carrying a stranger,  he said, “¿Que pasa? ¿Que pasa, carajo? ¿Que pasa?” The Haitian man told him what happened, and they rode back to to the woman’s house.

There, she told him what happened, and how to continue treating him at home. The woman never saw him again … until the very moment she turned onto a path just off the crossroads.

It was here we saw the two Dominican boys approaching. One was on a mule and the other on a horse, and they said, “Stop right there! Hold it, carajo!  Stop!” I immediately ran off with my calabash filled with rice in my hands.

At the end with my grandmother, I got a hold of myself. I was trembling. I was only 10.

One of the boys went up to threaten the woman, but the other one lagged behind.  He heard him crying and he asked him what was he blubbering about. He said, “That woman, I cannot kill her. She treated me with great kindness once. Once I was sick, and it was she who picked me up. She is the reason I am sprightly and able bodied today, and so I cannot kill her.”

They decided not to kill us, and let us go.

We were walking along a road when one of the woman’s donkeys got stuck in a ditch. We took hold of the woman’s reins and tried helping her pull her donkeys out. When she realized she wouldn’t be able to get them out she pulled a sheet out. She put the loads of material that the donkeys were carrying onto the sheet and piled the load on top of her head. Then we were off. We ran and ran and ran. Finally at one point, we realized we were headed down, we were descending.

Soon, we approached a body of water. It was on the border between the Dominican Republic and Haiti. When we arrived, we saw a bunch of dead bodies.

So we stood there. There were a bunch of Haitians on the Haitian side. They were calling to us, “Come, come, come! The soldiers are coming, and if they catch you, they will kill you all.” And it was true that the evidence was before us. But still, we stood there, immobile. Before we knew it, they had made it over. They grabbed our donkeys and took hold of our hands, and together, we made our way across. No sooner had we arrived on the other side, the soldiers who were killing people showed up. They saw us and said, “Bueno, no te apures.”

Once we got to the other side, they brought us to the local law enforcement office and they took down our names. They said, “Well, you guys are Haitians.” Now you just have to find a place to live.”