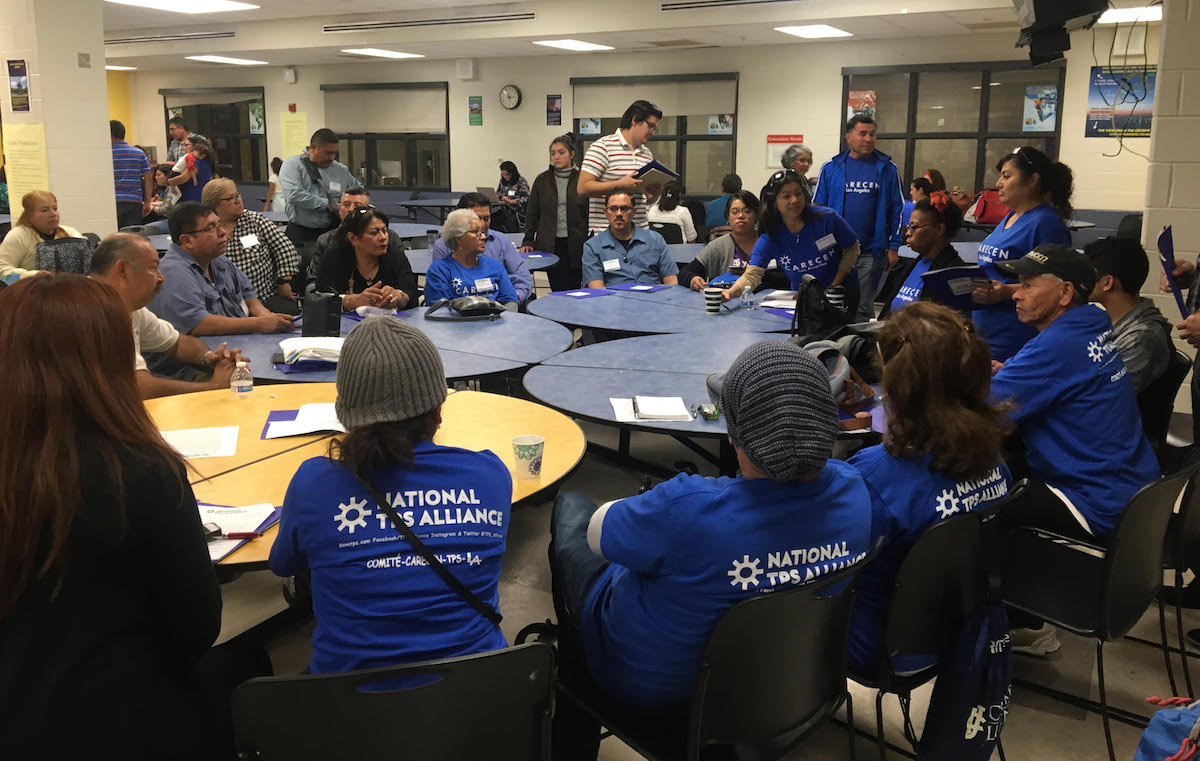 Temporary Protected Status (TPS) holders and their families gather around tables to share their stories and prepare for a week of action to save TPS in Washington, D.C. (Cora Cervantes/Latino USA)

WASHINGTON — Orlando Zepeda leaned on a wall of the cafeteria at Lincoln Memorial Middle School in Washington, D.C. He was tired after a 12-hour day that was nowhere near completion. In spite of his tired eyes, he eagerly took notes as speakers explained how to lobby for congress, the immigration landscape and the deadlines for Temporary Protected Status (TPS) holders like him. Zepeda and the fate hundreds of thousands of people with TPS from Central America will be decided by President Trump on November 5, when Trump decides whether or not he will continue designate Nicaragua, El Salvador, and Honduras with a protected status.

“My wife and I speak about this a lot. We are both TPS recipients. This would have a tremendous effect on our family. If were deported, we would return to a country we don’t know anymore and that my children have never been to,” Zepeda tells Latino USA.

Temporary Protected Status is a type of humanitarian relief granted by the United States since 1990 to foreign nationals from 10 countries deemed too unsafe to return, due to natural disasters or political violence.

At the age of 17, he fled war-torn El Salvador and arrived in Los Angeles in 1985. He was immediately detained by immigration services. He remained in detention for five days and was released on bail. He filed for asylum and a work permit, but his asylum case was denied. As luck would have it and due to a clerical error, Zepeda was sent a work permit. Unaware of the error, he continued to use the permit until 2001, when Congress passed TPS.

TPS holders are protected from deportation and have the ability to work, but it comes with a series of fees—$50 for the application, $85 for a bio-metric scan, and $495 for a work permit. They also undergo a rigorous screening process. TPS does not provide a pathway to citizenship.

“My country, El Salvador, is even more dangerous than when I left. As a teen, I was being recruited for war. Now, the gangs heavily recruit teenagers. I cannot place my children in danger,” says Zepeda.

For Marta Connor, 50, from Honduras, the deadline also looms. TPS has been her lifeline.

Connor has spent the last 29 years in Los Angeles. She has worked as a health promoter for 13 years and raised three sons. She is now a grandmother to three granddaughters.

Connor’s husband was a U.S. citizen. He passed away six months into her sponsorship, and before her immigration appointment. She was no longer eligible for permanent residency and became undocumented.

“That is when my struggle started. I was illegal and I couldn’t get a job. He was the provider for the house. So when TPS came out that was my opportunity. It actually changed my life. It turned my life around,” Connor said.

Connor cannot imagine returning to Honduras. She made a decision when her husband passed away to build a home for her children in the United States.

For many TPS holders, the conditions they face back home are grave. While the status is temporary, they argue that conditions are not safe and that events like civil war takes decades to overcome.

In the case of Haiti, their TPS status was granted as a result of the 2010 earthquake that devastated the island. According to the United Nations, the earthquake claimed 316,000 lives and displaced more than 1.5 million. Seven years after the earthquake, Haitians are still grappling with displacement and health disparities.

In an interview with U.N. Humanitarian Coordinator, Mourad Wahba, HuffPost reports that, “There are still about 55,000 people in camps and makeshift camps,” noted Wahba. “Many are still living in unsanitary conditions due to displacement caused by the earthquake. We have a very long way to go.”

For Haitians in the United States who are TPS recipients, home is no longer there.

Seven-year-old LaGranda June took time off from school in West Palm Beach, Florida to lobby with her mother, a TPS recipient from Haiti, in Washington, D.C.

“Let my people stay. Millions of people have children [in this country] and if their parents get deported, those children will suffer and that’s why I want my people to stay where they belong,” said June.