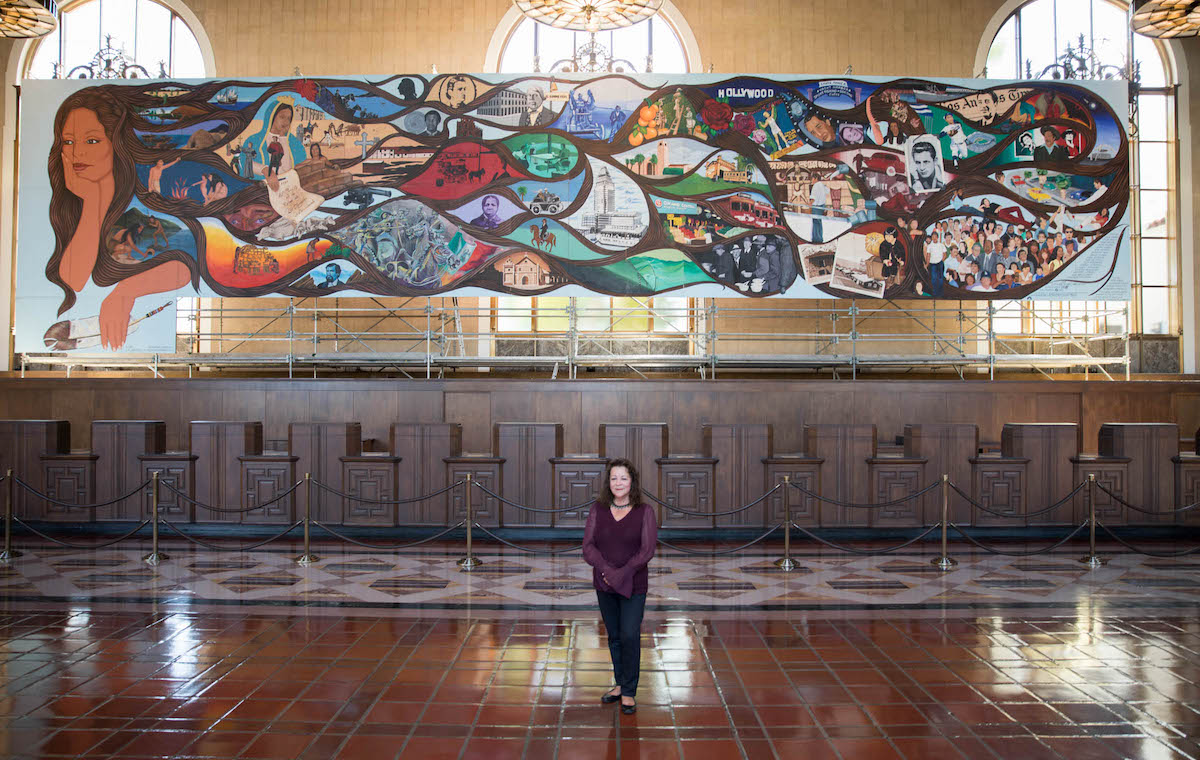 Barbara Carrasco was a bright-eyed, young muralist when the Los Angeles Community Redevelopment Agency commissioned her to paint a portable mural in 1981 for the city’s bicentennial celebration.

“I said, ‘Oh my god, I’d love to.’ I was 26 years old so I jumped at that opportunity,” Carrasco told Latino USA. “They left [the theme] pretty open. They said, ‘Anything dealing with Los Angeles.’ So I thought it would be wonderful to do the history of Los Angeles, because I’ve never seen one done here in L.A.”

The city had approved her sketches of the mural, so she began to paint what would soon become 43 panels that made up a chronological history, the good and bad, of Los Angeles. While the project was still in progress, the agency’s architects called her in for a meeting and asked her to remove multiple images from the mural.

“One of the images that [the CRA] wanted taken out was the Japanese internment scene at Manzanar. It’s a real famous photograph of a little girl sitting on a suitcase and then you can see the Manzanar guardhouse in the back,” said Carrasco.

She stood her ground and refused to change the images, and the project was canceled.

“They should not ask an artist to take or change anything in the mural,” Carrasco said.

Carrasco’s story was featured in the beginning of the Latino USA episode “It Happened in L.A,” which shared how the mural was censored in the 1980s for its troubling, but true, historical depictions of communities of color in Los Angeles.

Carrasco finished her mural titled “L.A. History: A Mexican Perspective,” and placed it in storage. The artwork was on display in its entirety at Union Station in Downtown Los Angeles during the 1990 Los Angeles Festival for about three weeks, and placed right back in storage—until 2017.

The California Historical Society and LA Plaza de Cultura y Artes spearheaded an effort to bring the mural back to Union Station, one of the few places in the city large enough to accommodate the 43-panel portable mural, 20 feet tall and 80 feet wide. It was on display for the first time in 27 years, from September 29 through October 22, as a part of the Pacific Standard Time: LA/LA initiative, a far-reaching and ambitious exploration of Latin American and Latino art in dialogue with Los Angeles.

The mural depicts an indigenous woman with long flowing black hair, and woven throughout her hair are 51 historical scenes, including the Hollywood sign, the 1932 Olympic poster, Grand Central Market, and the scene—that was once deemed “problematic”—of a young girl sitting on a suitcase that represents the Japanese-American internments during World War II.

Angelenos of all ages and races viewed the mural at Union Station while it was on display, and Carrasco, who fought to keep every image in her art, was able to witness firsthand the power of preserving history.

“An elderly man came to see the mural. I’d never met him before, but he was interned at the Manzanar internment camp. Somebody told him that I [was] the artist. He turned around and he hugged me so tight and he said, ‘Thank you for fighting for this image to be in the mural.'” Carrasco said. “I almost lost it right there on the spot, because it was so emotional to see someone so touched by my work.”

“It’s his history. He’s the one who actually was suffering through those years and to hear that he’s grateful that it’s in [the mural], it’s just wonderful.”

As of publication, Carrasco’s mural still awaits a permanent, public home. At her own expense, Carrasco keeps the 43 panels in a storage facility, just like she did when it was originally censored in the early ’80s.

In the meantime, photographs and documentation of the making and censorship of Carrasco’s mural are part of the exhibition, ¡Murales Rebeldes! L.A. Chicana/o Murals under Siege, a part of PST: LA/LA. The exhibition is currently on view at LA Plaza de Cultura y Artes through February 27, 2018.

“The search continues to locate a permanent home for the mural,” a representative from LA Plaza de Cultura y Artes said in a statement. “Stay tuned for updates.”