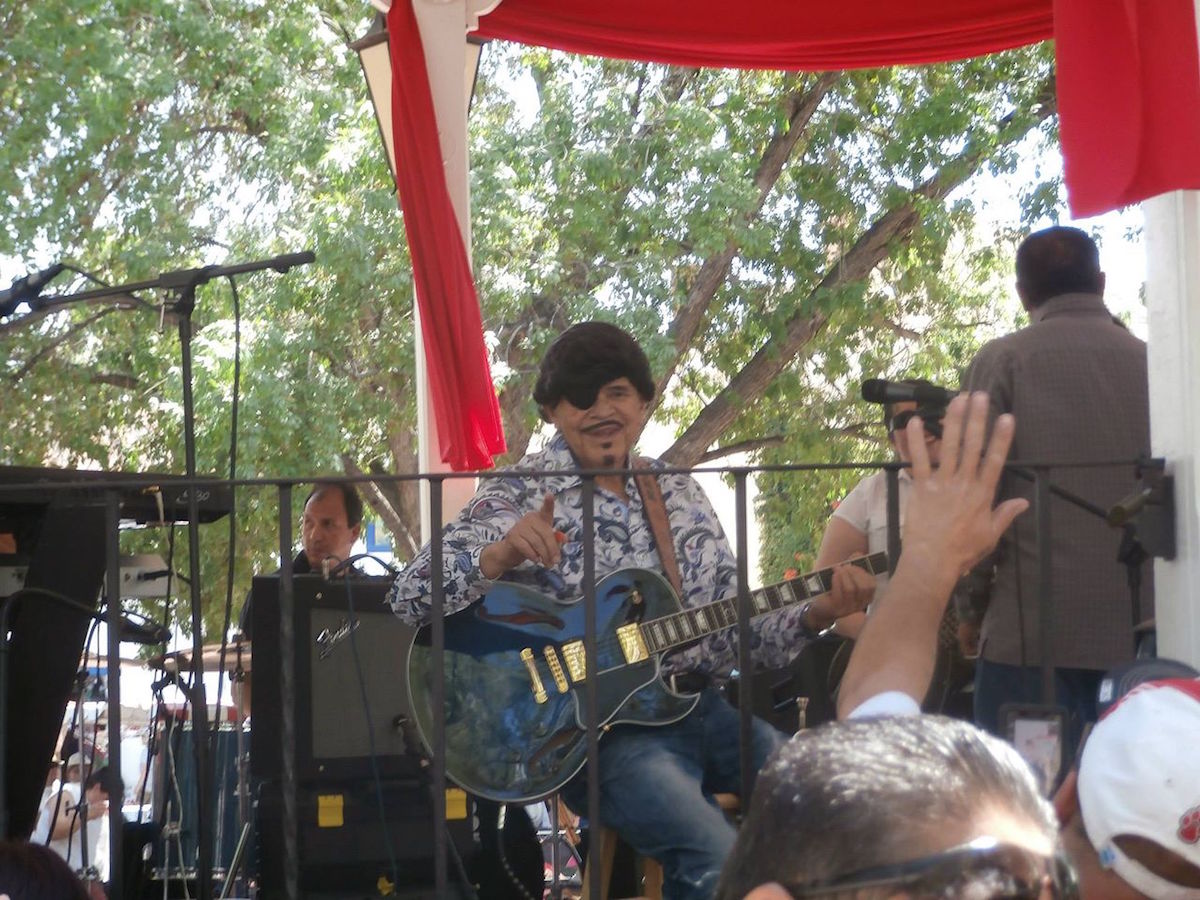 When Al Hurricane died at age 81 on October 22, it might’ve been the first time ever that New Mexico music made the pages of the Washington Post, the New York Times, the Associated Press and other national publications. It’s America’s forgotten folk music, a bilingual genre that traces its ancestry back centuries to the romances and décimas of the Spaniards who colonized the Land of Enchantment in the late 1500s, and whose descendants call themselves Hispanos.

Along the way, the genre also picked up Pueblo, Mexican, R&B and other American sounds. In the nimble fingers of Hurricane (born Alberto Sánchez), New Mexico music modernized to its present state: Nashville meets Memphis in Albuquerque. Bright horns, soulful singers and rock guitars accentuate country-western rhythms, and bands can go from “Jambalaya” to “La Puerta Negra” while their audiences dance along without missing a beat.

This is a regional style that’s vibrant and well alive—the Hispano Music Awards will celebrate 27 years this January, and New Mexico Music, a program that airs weekdays at noon and Saturday mornings on Albuquerque’s NPR station, KANW-FM 89.1, is consistently the station’s most popular program. But New Mexico music unfortunately never found national acclaim like Tejano or zydeco music, or a gabacho champion (see Ry Cooder and the Buena Vista Social Club). So its grand ambassador became Hurricane, a colorful character who wore an eye patch, had the best head of hair in music since Frankie Valli, and defined New Mexico music for 50 years. As noted ethnomusicologist Elijah Wald pointed out in his obit, “Very few people have invented a genre of music”—and Hurricane was one of them.

To give ustedes a sense of the vastness of New Mexico music, I’m highlighting some historic stuff, some oldies, and some contemporary rolas, too. And one big caveat: The best examples of the OLD SKOOL New Mexico music ain’t on YouTube. If you really want to learn the history and read hundreds of old songs, find copies of Spanish Folk Poetry in New Mexico (Arthur Leon Campo, 1946), and the magisterial Hispanic Folks Music of New Mexico and the Southwest: A Self-Portrait of the People, gathered by legendary musicologist John Donald Robb.

Al’s signature song, it could’ve played at the Grand Ole Opry or a charreada based on the rhythm alone. But Al owns it with his tender voice, his family’s backing vocals, and sparkling guitar riffs that owed more to rock ‘n’ roll than anything rural. And that one-piece suit is STRAIGHT David Bowie.

Al’s brother Baby Gaby recorded this novelty song, which has a hell of a convoluted history. I don’t like to rip myself off, but I talked about its history in a 2013 column: “The song’s real name is ‘Shame and Scandal in the Family,’ and Gaby most likely covered the version sung by Mexican-American artist Trini Lopez. Lopez, in turn, joined legendary American recording artists like the Stylistics and Johnny Cash in covering a song called ‘Shame and Scandal”’ recorded by ska and reggae titans ranging from the Skatalites to the Wailers (with Peter Tosh in the lead). They, in turn, were giving their spin to a calypso classic originally grabada by Sir Lancelot in the 1940s.”

It’s a favorite in New Mexico, especially with its Hispanicized lyrics and José Jiménez accent. I have no idea who cued the song to the old, racist Mickey Mouse cartoon in the YouTube clip shown here, but good for them!

It wasn’t until I was an adult that I discovered that Sparx were not Mexican but actually a quartet of New Mexican sisters. And it wasn’t until I did this article that I discovered that they’re the daughters of Tiny Morrie, the hermano of Al Hurricane and Baby Gaby—what a family! The Sanchez sisters and their brother Lorenzo Antonio have sung across Latin America since they were teens, but they became most famous for Cantan Corridos, a 1996 compilation of Mexican standards and family originals that spun nonstop on any Mexican immigrant’s Kenwood system in the 1990s. I still don’t know who told the sisters to do that synchronized sway on this music video, or the shoulderless blouse thing with the ankle-high skirts (then again, it was the 1990s), but their angelic voices lift “Rosita Alvirez,” one of Mexico’s classic corridos.

Religious tunes continue to play a big role in New Mexico, where Catholic traditions go back centuries. This haunting indita (a subset of New Mexico music distinguished by its use of indigenous rhythms or themes) is an homage to a Hispano nativity play that celebrates the conversion of colonial New Mexico’s most feared enemy: the Comanche.

This version was recorded in the early 1990s as part of Smithsonian Folkways’ essential Music of New Mexico: Hispanic Traditions

Unlike most mariachis, those from New Mexico actively created new tunes and worked them into their sets, from Debbie “La Chicanita” Martinez in the 1970s to Los Reyes de Albuquerque, who fuses the vocal harmonies of trios with the horn-loving New Mexico sound. The subject in question is the New Mexico Army National Guard’s 720th Transportation Company as they went off to fight the Gulf War, with many troops carrying copies of the album to remind them of home.

The resident of El Rito is a one-man treasure of traditional Hispano music, publishing a 2014 book (New Mexican Folks Music: Treasure of a People) and releasing 21 CDs that feature songs recorded as far back as the 1960s. This sparse song was also part of Smithsonian Folkways’ Hispano compilation.

This song owes more to the grupero wave of northern Mexico in the 1970s than anything from New Mexico, but it’s still a hoot. A high voice, a shimmering organ, and expert guitar gives shoutouts to the Hispano heartland of northern New Mexico: Chimayó, Española, Alcalde, and the ever-stunning New Mexico mountains.

A favorite for straightforward party music, Cuarenta y Cinco mixes cumbias with rockabilly and other dance rhythms. And in this song, they take the Latino legend of La Llorona and make her happy for the first time in human history #respect.

Sing this song in English, and it’d be playing in honkytonks across Oklahoma. And that’s the genius of Cordova. He’ll be the headliner at this year’s New Mex Music Fest in Pueblo, Colorado, on December 2 (with his brother Daniel right before him), and wows crowds with ballads and barn-burners alike. This one is crisp country, and also shows Cordova’s experimentation—accordions are rarely used in New Mexico music, but he employs them to perfect, moody results.

The Mexican ranchera legend debuted this Manuel Hernandez song in 1954, which anthropomorphizes a woman as a lark (la calandria) who uses false promises of love to trick a gullible sparrow (gorrioncillo) into freeing her from a gold cage. But did Hernandez base his classic on a New Mexico tune? Campo’s Spanish Folk Poetry in New Mexico has a longer, slightly different version of “La Calandria” and notes “no other ballad of this name” had been logged in Spanish and American collections of corridos at the time. And there’s an even longer take in Charles Fletcher Lummis’ 1893 ode to New Mexico, “Land of Poco Tiempo.” He placed its origins in Sonora, but only because “the gorrion is not a New Mexican bird.” Homeboy was a great folklorist but bad ornithologist—the Land of Enchantment has over 30 species of the Mexicans of the bird world.