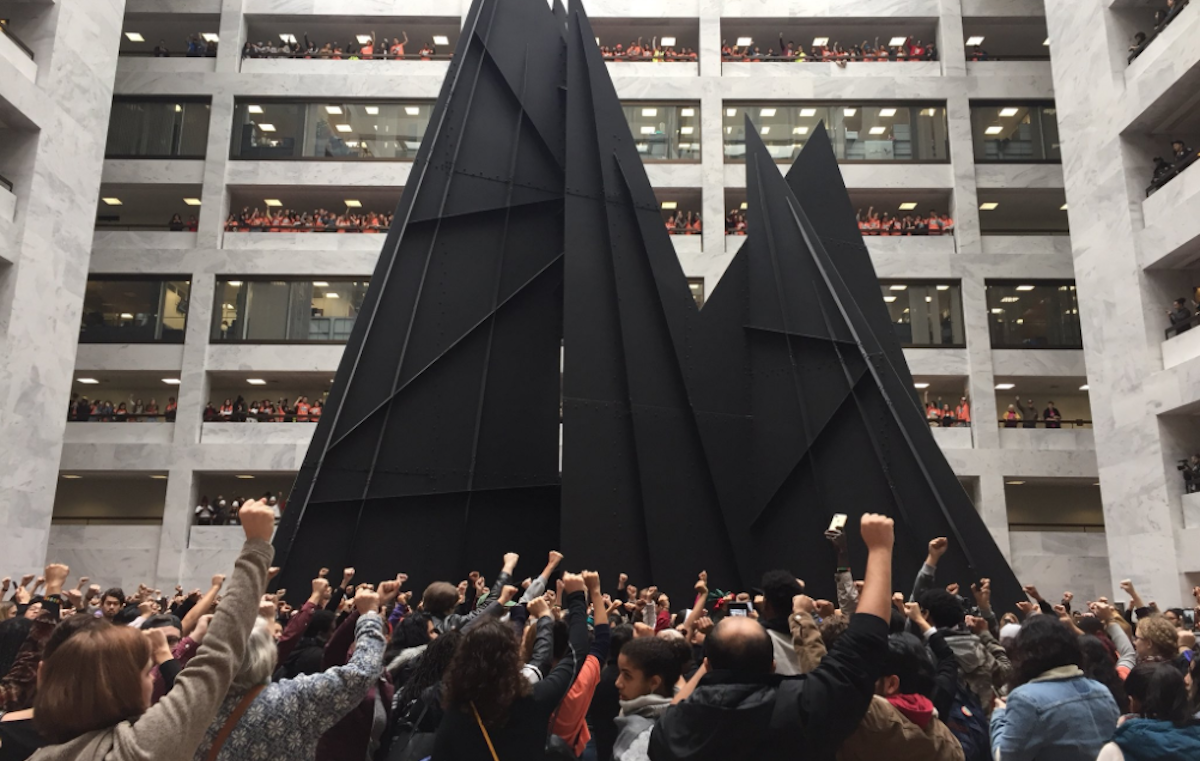 With fists in the air, hundreds of protesters gathered inside the Hart Senate Building on Thursday in Washington, D.C., to pressure Congress for a “clean” Dream Act—meaning legislation that stands on its own.

Protestors consisted mostly of students, both high school and college.

Two months have passed since President Trump announced in September that he would rescind the Deferred Action for Childhood Arrivals (DACA) program, which grants work permits and deportation protection to nearly 790,000 young unauthorized immigrants. For many of the DACA recipients, work permits will begin expiring in March.

Executive director and co-founder of United We Dream (UWD) Cristina Jiménez told Latino USA that about 1,500 people participated in the actions throughout the D.C. area and also said that more actions occurred in other parts of the country.  According to a UWD release, “over 1,500 young people walked out of DC Capitol area schools and traveled from Oregon, Washington, Arizona, New Mexico, Georgia, Massachusetts, California, New York, Kansas, Colorado, Florida, Minnesota, Wisconsin, South Carolina, North Carolina, and Oklahoma.” UWD has been campaigning for a clean Dream Act over the past few weeks.

“The best and most optimal window of time that we have to pass a clean Dream Act is this year,” Jiménez said. “The urgency is now. We have been focusing on elevating that urgency.”

With DACA recipients beginning to lose their opportunities for renewal, Jiménez added that “more and more people are becoming vulnerable to deportation.”

The strategy, Jiménez explained, is to get the Republican leadership to push for Dream Act legislation before the end of the year and to get Democrats to not let the Dream Act become a bargaining chip in exchange for extreme immigration enforcement. She noted that before the main action at the Hart Building, a group of about 20 Republicans were urging Speaker of the House Paul Ryan to move forward on legislation that would protect DACA recipients.

During the protest, a banner was rolled out and contained one demand: “Congress, we demand a clean Dream Act now.”

“When I was in the Hart Building, it was probably the most powerful thing to see,” Jiménez said. “Probably the most diverse group of high schoolers that I have seen all together, holding hands and chanting together for a clean Dream Act.”

According to U.S. Capitol Police, 15 protestors were arrested.

Videos and images of the protest were posted on Twitter and other social media as it was happening earlier on Thursday.

#DREAMers are demanding a clean #DreamActNow! We will not allow the end of #DACA to hurt 900k lives. pic.twitter.com/ImgYF6NH4Q

Hundreds of youth walked out of their classrooms today and are packing the halls of Congress RIGHT NOW to demand the #DreamActNOW pic.twitter.com/N3Qs8FjEom