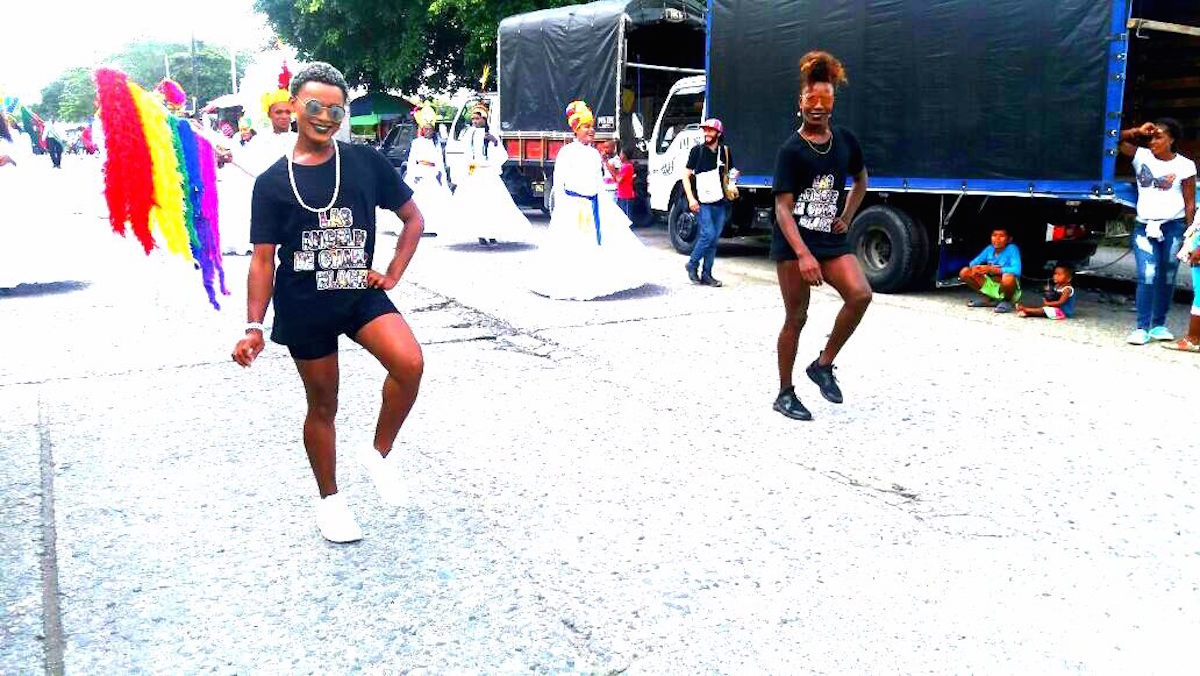 When Erlin Mena was a kid, his dad tossed him into the river because he squealed over a mouse. Erlin is from a rural area in Colombia, and his dad couldn’t accept that he was different.

“My dad said if I wanted to be gay, he’d drown me,” Erlin told Latino USA in Spanish. “I knew that I had to get out of there. I had to disappear.”

As a teenager, he moved to Medellín and took modeling and dance classes. He was in commercials and did some ballet but that type of dancing didn’t draw him in. Michael Jackson stole his heart.

In the 1980s, a friend invited Erlin to the San Pacho Festival in Quibdó, a weeks-long celebration with parades in the streets and on the rivers, full of incredibly bright costumes, performances and dancing. That’s where, as Erlin says, “my damnation began and all of my dreams stayed here in Chocó. Or not damnation, maybe I should say successes.”

He decided to move to Quibdó, the capital of the Chocó department, a western region of Colombia surrounded by rainforest in the Atrato River basin, a region historically rife with violence between the warring factions of the Revolutionary Armed Forces of Colombia (FARC), paramilitary groups, and the National LIberation Army (ELN). And even though the civil war officially ended with the signing of a 2016 peace deal, the violence continues today. Armed groups are fighting to fill the void left behind by the FARC and take over their territories and illegal mining operations. During the first six months of 2017 in the Chocó department, 4,525 people have been forced out of their homes because of the violence in that region, according to a report by the Unidad de Manejo y Análisis de Información Colombia.

Back in the 1980’s, Mena began performing, despite the civil war around him. He dressed as Michael Jackson, his moves were just as good and the people loved him.

But what really gripped the town was when he decided to sing and dance in drag. That night, a bar called 300 Años overflowed, the streets were packed with people outside—everyone wanted to see the drag queen in heels and a gown. Mena took the stage but his two backup dancers were too afraid to join, so he launched into a choreographed dance solo.

“There were 27 young people holding sticks and rocks waiting for us,” Mena said. “But nobody threw rocks. They expected to see something ridiculous. Instead they saw art.”

Gay, proud, and in sequins, Mena was such a sensation that reporters dubbed him and his backup dancers La Locomía Chocoana (a tribute to the Spanish pop sensation Locomía).

They went on the road and their fame preceded them, stadiums sold out and fans loved the shows. And thanks to the group, people claim that “there is no homophobia in Quibdó.” (Although when pushed on what that means, it is telling that Chocoanos are quick to explain that you won’t get killed in the street in daylight just for being gay—a difference compared to other rural areas in Colombia.)

Over the years, one of the members of the group died of AIDS and another decided to hang up his heels. Now Erlin performs solo drag shows in Quibdó, however infrequently. La Locomía Chocoana may be gone but they left an indelible mark.

“Gay people aren’t mistreated anymore. It was a difficult struggle but we didn’t give up,” Erlin said.

Kenny Mena —no relation to Erlin— is a young protegé of the older drag queen. He’s a dancer and performer and has even done a few shows with Erlin.

“I remember I was a young teenager when I met Erlin. It was at the San Pacho Festival and he was dancing to the famous Shakira ‘Waka Waka’ song. He taught me so much. She’s such a great artist” Kenny said, switching between genders when he refers to Erlin as his onstage alter ego Chantal.

Kenny has won 13 pageant titles in drag competitions across the country and he said it’s thanks to the older generation who forged the path before him that he lives without fear and is able to go to college and study to become a social worker. He is currently a contestant in the 2018 Miss Gay Earth pageant and is sharing his experience about the competition on his Instagram.

“I want to help transform my department, especially the LGBT community, so that we can take up more space. We’re not just hairdressers or makeup artists, and we’re not just drag queens,” Kenny said.