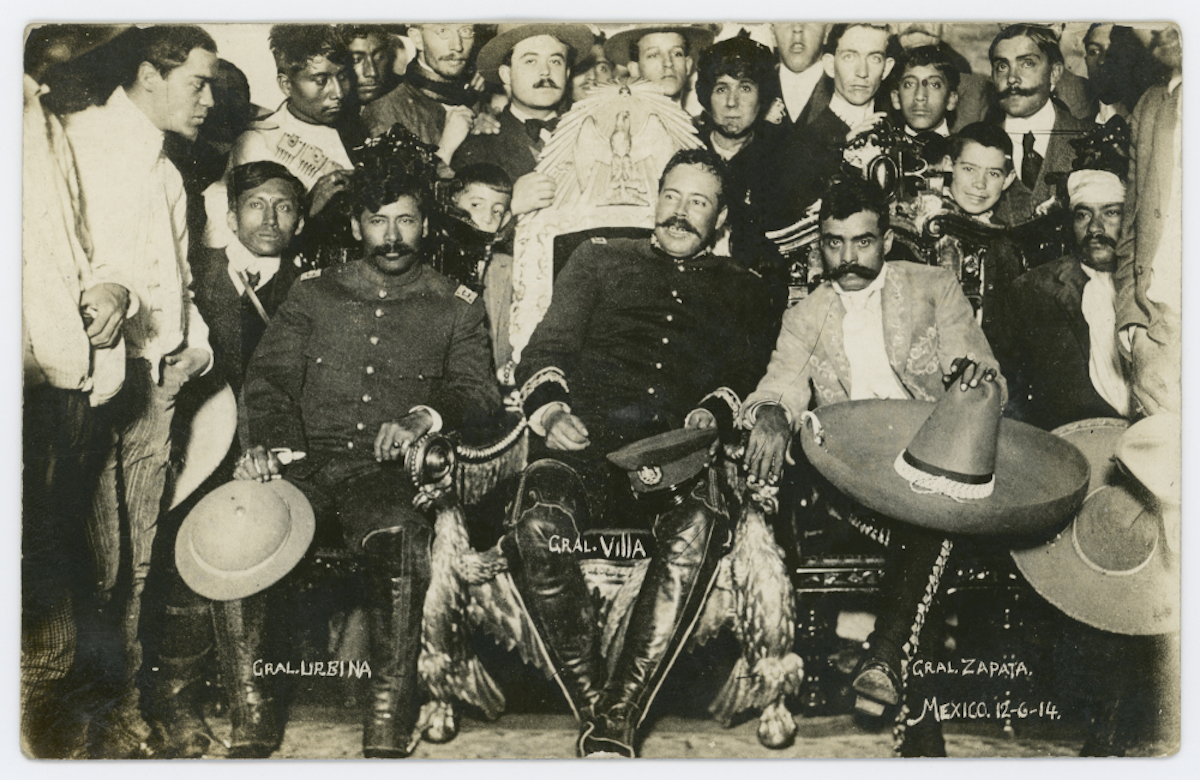 My manners: we haven’t properly been introduced!

My name is Gustavo Arellano, and if you’ve heard of me at all, it’s probably because —take your pick— I was editor of OC Weekly/I wrote the syndicated column, ¡Ask a Mexican!/I wrote the book Taco USA: How Mexican Food Conquered America/you know my nerdy voice from hearing NPR in the past 14 years.

But before all of that, I was a music critic. I got to cover the tail end of rock en español’s glory days—hell, I remember when the new act in town was Kinky, whose music you hear in commercials all the time. But I also got to see Vicente Fernández cry, Los Tigres del Norte at the old House of Blues in Hollywood, La Santa Cecilia when they were my house band for a radio show. I even saw Morrissey play a show at an Indian reservation in Yuma a couple of weeks before he opened for Jaguares. (And yeah, Morrissey’s been having some serious issues lately.)

Music remains a passion of mine, so much so that I’d take time out from all my gigs to pen thoughtful lists and essays about Mexican music for OC Weekly. The American public still remains horribly ignorant about nuestra música beyond mariachi hats and narcocorridos, so I’d try to do deep dives into groups, genres and themes, because someone had to. Especially the old stuff: so little has been written about old stars like Toña la Negra, Pedro Infante, and Trio Calaveras in English that I’m surprised no one has bothered before.

When I left OC Weekly, the homie boricua Julio Ricardo Varela graciously invited me to pitch ideas to Latino USA, I suggested I do my music essays. He thankfully accepted, so this is the fourth of five listicles I signed up for. Hopefully, I return next year—so if you like what you’ve heard and read so far, share my lists far and wide!

But for now, this week’s subject: songs of the Mexican Revolution, and yes, TODAY November 20 is the anniversary of when it all started in 1910.This genre is now regularly heard live only on Mexican oldies station or whenever mariachis perform, and it’s a damn shame. The cataclysmic event is when the corrido truly took shape as a song of the people, and its authors crafted vivid epics that taught history, created legends—and most importantly, had rhythms that made them hummable over a century after the events depicted. Many of the greats—Antonio Aguilar, Los Alegres de Terán, even Chalino Sánchez—recorded whole albums of corridos villistas. Meanwhile, when was the last time you sang a song about World War I? Do you know any songs besides “Over There” and “How Ya Gonna Keep ’em Down on the Farm (After They’ve Seen Paree)”?

Most songs of la revolución cast mujeres as little more than virginal goddesses waiting for their man to return—even “La Adelita,” which has become the nickname for our fightin’ mujeres, is sung from the perspective of a soldier praising his love’s worth. Then there’s this post-war composition of a mythical soldadera so badass that she was the cucuy of the federales. Yeah, Juana sprung into action only because of the death of her beloved Chon, but what a warrior! “By attributing to Juana unlimited power,” wrote Maria Herrera-Sobek in her magisterial 1990 book, The Mexican Corrido: A Feminist Analysis, “the song casts her as a female Hercules who is invincible and whose enemies, even the most stout of heart, tremble at her audacity.” Here, sung by the underrated Lucha Moreno.

Until Chalino came along, no historical figure got more songs written about them in Mexican music than Pancho Villa. And none are better than this relatively late corrido about el Centauro del Norte, a version of the more famous “Febrero 23.” As I wrote way back when: “This song derides the Punitive Expedition, the 1916 pursuit of Pancho Villa by General John Pershing that resulted in nada. Backed by a jaunty accordion, the brothers Zaizar sing of thousands of gabacho faces “covered in shame” as they trolled northern Mexico with airplanes and modern weaponry in a vain search for the original dirty Mexican. Highlight of the song: When Villa flies over the Americans and waves adiós. Complete with old-timey biplane noises!”

The vigor of the song’s lyrics —“If they ask for my blood, my blood I’ll give/for the residents of our nation”— and its meaning (a nickname for a Winchester Model 1894 lever-action rifle) almost tricks you into thinking this was written by a soldier straight from the battlefield. But it was actually from the 1949 movie ¡Arriba el Norte! Nevertheless, the song paints such a powerful scene of righteous rebellion that groups across Latin America recorded it, including this late-1960s version by Chilean folk group Quilapayún.

The ranchera legend Aguilar killed it on this ode to Pancho Villa’s horse (Seven Leagues, named so because of the distance he allegedly galloped in one day), because it mixed Aguilar’s two great loves: history and horses. Strangely, the song doesn’t say much about the horse other than it’s Villa’s favorite, and that it “stood and neighed” every time it heard the train whistle that signaled its master’s return. But “Siete Leguas” is still a beautiful song… and now the name of a bad tequila. That one hurts.

This corrido isn’t exactly about the Mexican Revolution, but rather a mining strike that happened in the Sonora city in 1906, one that saw an American posse cross the border to kill Mexicans in their own country. That incident became one of the outrages allowed by the Porfirio Díaz administration that led to the Mexican Revolution, and one sung by every ranchera and norteño singer since. And then there’s this version by Los Caminantes, who make it bouncier than usual but maintain the song’s dour defiance as it matter-of-factly states the protagonist’s predicament in jail. True story: I once played this version to Rage Against the Machine’s Zach de la Rocha off my iPod in downtown SanTana, to teach him about his Mexican heritage.

Few songs of the Mexican Revolution that remain in heavy rotation today praise anyone on the side of Mexican government, but this tune about one of Villa’s greatest foils is a notable exception. The corrido gives him nothing but #respect, even allowing him to state, “Hear me, my general/I also was a brave man/I want you to execute me/I want you to execute me/In front of the public.” The most famous version was by Antonio Aguilar, but this old version gives nearly all of the lyrics.

Nearly all the famous songs of the Mexican Revolution come from el Norte, the heartland of the corrido. This track is a later addition, but it’s also a rarity: a son huasteco, a form known for its falsetto voices, crazy fiddle, and ABBA lyric structure. “Soldado de Levita” (“Soldier in a Frock Coat”) tells the travails of a bedraggled cavalry soldier motivated to battle—gracias to a beautiful woman and a widow. But its mournful lines —“He who’s born disgraced/begins from the crib/to live martyred”— has stuck in the Mexican psyche and got a shout-out in José Montoya’s famous 1970 poem about a Korean War vet, “El Louie.”

This isn’t one of José Alfredo Jiménez’s most famous songs, which just means it’s a minor masterpiece—his “And Your Bird Can Sing,” if you will. “Four shots were fired/at two in the morning” is the dramatic start, as the protagonist kills his wife’s lover in her arms. He joins the Revolution to escape the law, but tells his wife, just after the mariachi horns toots a dash of “Taps” to foretell his fate, “I owe you in life/to be sentenced to death.” Again: this is one of José Alfredo’s third-tier songs. Can’t wait to highlight his good stuff!

This is a curious entry in the pantheon of Revolution favorites, as it’s the title for two markedly different corridos about the same mythical figure. The most famous version, by Antonio Aguilar, who did a film of the same name and three sequels), casts him as a drunk womanizer killed for a morena. This take, by actor Ignacio López Tarso, casts Gabino as a general in the Revolution assassinated in the line of duty. The only similarities between the two: he was an “indio suriano” who could step on thorny plants and not feel a thing, he was killed with 18 shots from a Mauser handgun, and “with a bottle of aguardiente/he shouted ‘¡Viva Zapata!‘”

If this one sounds a bit like “Siete Leguas,” it’s because the author is the same: Graciela “La Bandida” Olmos, who could write macho corridos as well as any hombre and knew Villa personally. “En Durango comenzó” begins her lush paean, and it’d go on to be covered multiple times. But the most famous take is by Miguel Aceves Mejía, “El Rey del Falseto,” who lets his warm vocals wrap around lyrics that follow the shape of Villa’s career: a beginning as a bandit, a rise to the top as a leader who boasts, “I don’t know fear,” and his eventual death.

There are surprisingly few popular songs about Emiliano Zapata—in fact, the most prominent mention the general gets is in “Gabino Barrera.” But as proof that the Revolution still reverberates over a century later, comes this Rage Against the Machine track from their “Live and Rare” album, done to honor the Zapatistas of Chiapas. “Zapata’s blood/Wasn’t spilt in vain,” screams lead singer Zach de la Rocha. “So now the most poor/wage war/To reclaim their name.” He then slows the tempo down ala Gil-Scott Herron. ¡Viva Zapata!

2 thoughts on “The 10 Best Songs About the Mexican Revolution”