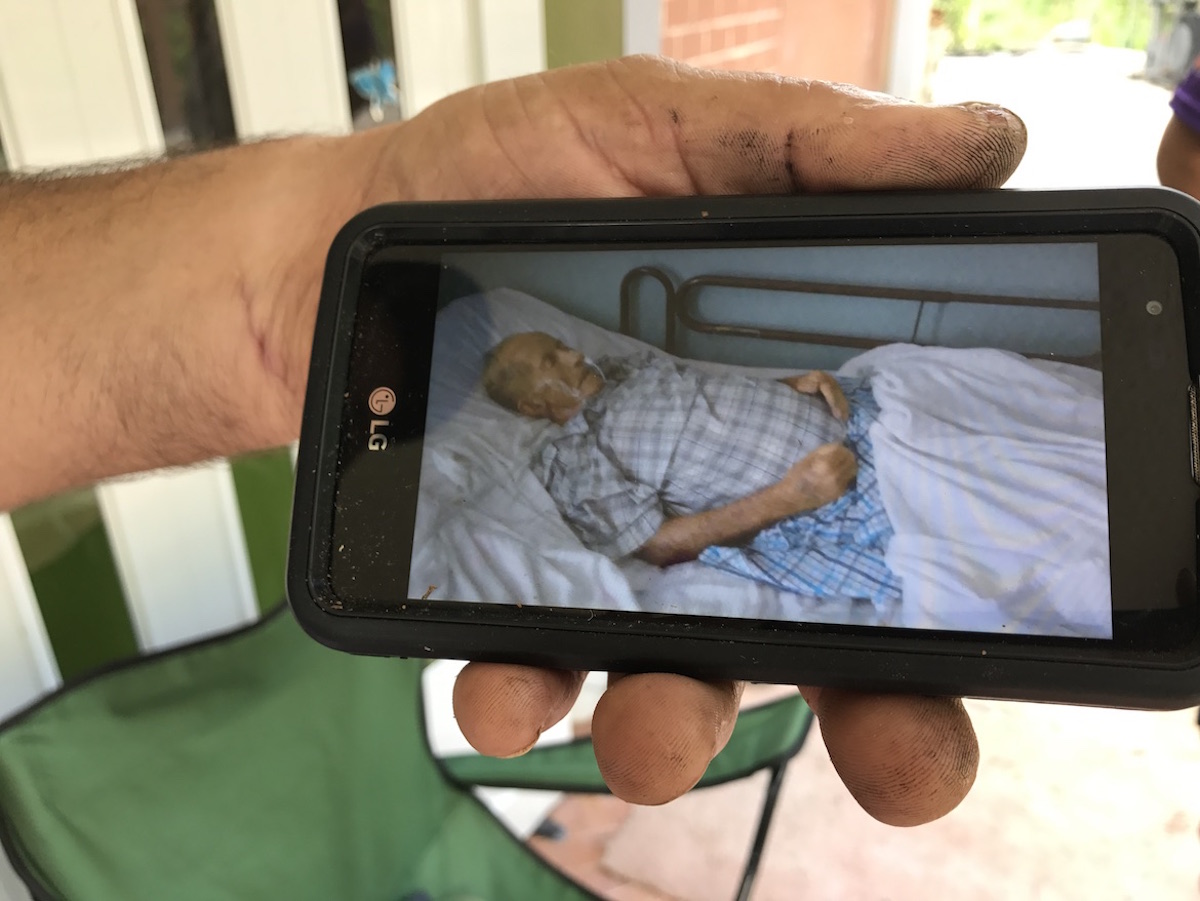 Teodoro Colón Rodríguez's son-in-law shows a photo on his phone of his father-in-law's corpse three days after his death. (Omaya Sosa Pascual | Center for Investigative Journalism)

A study published on November 21 concluded that the deaths in Puerto Rico related to Hurricane María may be at least 10 times higher than the government’s official count of 55.

The analysis, co-authored by Alexis R. Santos-Lozada of Pennsylvania State University and independent researcher Jeffrey T. Howard, used historical data from Puerto Rico’s demographic records to calculate that “the number of excess deaths in Puerto Rico may actually be closer to 500 for September.”

“If the pattern held in October,” the study said, “we estimate an additional 500 excess deaths. These estimates are higher than the official count, which stands at 55 deaths in November, 2017. This would be also once all deaths are reported. Our findings suggest that the actual mortality burden attributable to Hurricane María may be far higher than current official statistics,and may exceed the current official death toll by a factor of 10, or more.”

A full copy of the study can also be accessed here.

On November 8, the government of Puerto Rico acknowledged that deaths on the island increased by at least 43 percent during the first 10 days after Hurricane María. The government also said that the official death count from the hurricane is still at 55 victims.

Recent stories from the Center for Investigative Journalism and CNN have reported specific examples of deaths related to the hurricane that the government has not counted.

At a Monday morning press conference in San Juan, Puerto Rico governor Ricardo Rosselló was asked if he were satisfied with how his administration has handled the certification of deaths related to the hurricane. He said yes and added the following in Spanish:

“We aren’t saying that, ‘this is the number of deaths and that’s that.’ We have to be responsible in regards to this. There has been a process, just like in other hurricanes, in other catastrophic processes like this one. Information will keep coming out, and what we have been saying, we are very open. If there are different groups that have found one of those deaths, they can be reported to us. They can be brought into the process just like others have been conducted in this process, and these deaths could get added. There is no doubt in that. What is important, what we have said from the beginning—we have established a process, a process that is more difficult, because what was done traditionally before, one would go to the Demographic Registry. But the moment the hurricane hit, all those offices were out of commission and we have been working with a structure that included the hospitals, with the Office of Forensic Sciences, and the protocol is an adequate one that will continue to be affected, but we are open and available to understand that when a death is identified —these deaths being a direct or indirect product of the storm— then these deaths should get added and listed as part of this. We want to speak to people with clarity, but the other important side of this is that during the storm, there were reports of 200 people who died in a flood. And the reality is that this story wasn’t true. Or there were reports, telephone calls I received, that there were 100 deaths caused by malaria or cholera in some places. This wasn’t true, either. We are very open to keeping this process very open. The state coordinator has done an excellent job, but it is the process. While more people are found to have died directly or indirectly from the storm, of course these deaths would be added [to the official death count.]”