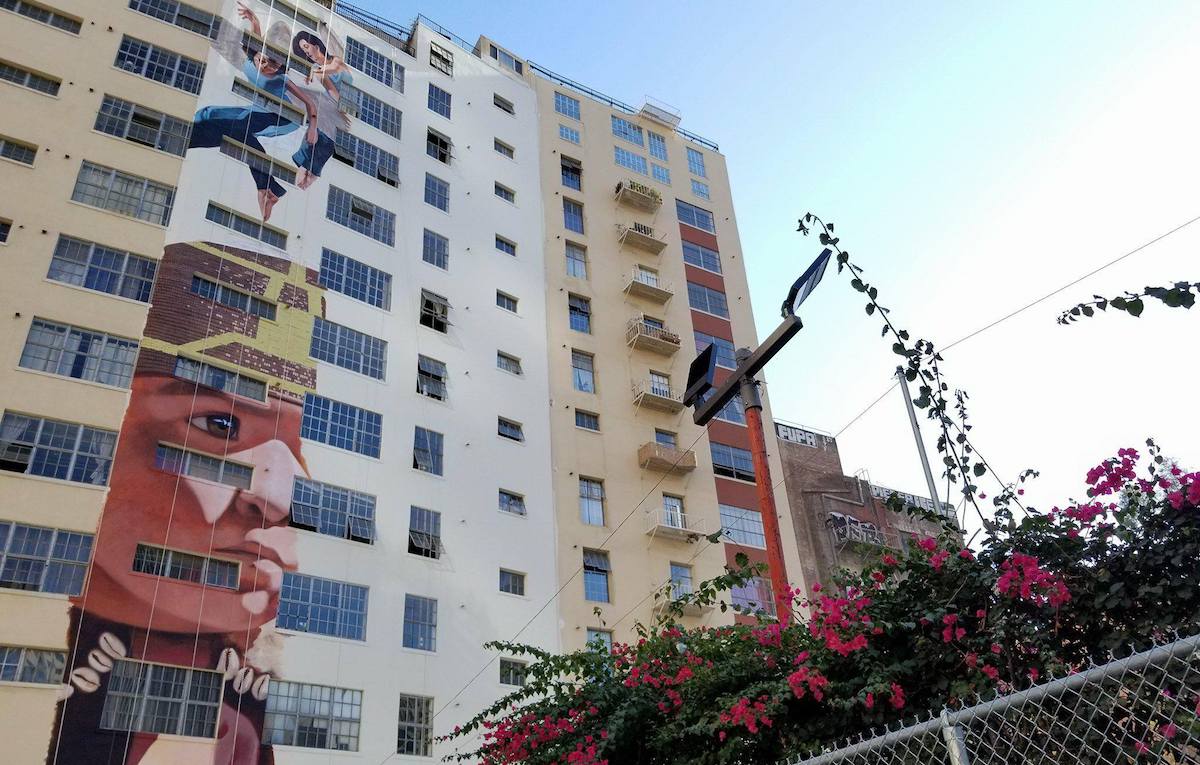 Angelus, the 60,000 square foot mural by artist Robert Vargas, is on a 12-story apartment building across from Pershing Square in downtown L.A. (Cora Cervantes/Latino USA)

Towering above the streets of Los Angeles, next to the bustling Pershing Square’s metro station and surrounded by street vendors, Latin music blasting from a local store, and sharing the ground with some of the city’s most underserved people is Angelus. The massive mural, which is in progress, renders the image of a young indigenous girl overlooking the city, and two angels flying high above her.

Nearly four years after its inception, Angelus, the 60,000 square foot mural by artist Robert Vargas, will make its debut in downtown Los Angeles in early 2018. The piece will be the largest mural of a Native American in the world—and Vargas’ attempt at breaking the record for the largest mural ever completed by a single artist.

“The Native American girl that is there, she is the original Angeleno,” Vargas told Latino USA. The young girl depicted is from the Tongva tribe, the people who originally populated the Los Angeles basin. “There was a conscious effort to celebrate the indigenous people in Los Angeles.”

Vargas was born and raised in the Los Angeles suburb of Boyle Heights, amidst a bustling immigrant and Latino community with a rich history of muralism.

“The mural is also autobiographical. I am also Native American and Mexican. I wanted to celebrate that as well,” Vargas said.

Vargas, a graduate of Los Angeles County High School of the Arts and Pratt Institute in Brooklyn, New York, said he’s very self aware of how his murals interact with the space they are in. His mural work is featured in the streets of Los Angeles, and his portrait series and skills have traveled from Los Angeles, to Japan, and Dubai. The portraits offer a diverse collection of faces and people from all walks of life.

He expands on these values when he speaks about Angelus’ two visual narratives.

“There is the mural [on the surface] that everyone will see, and once a year there will be the sub-narrative that will happen for us,” Vargas said in regard to the two narratives of the mural. One is the surface mural which will be visible year round, and the second narrative will be visible Feb. 9 when the sunlight will create a special effect with the mural’s color, light, and shadows.

“That sub-narrative, the way the light and shadow are hitting the wall, it will tell a story that represents people of color,” said Vargas.

The mural’s technique was inspired by the ascending and descending serpent seen on pyramids in Mexico, as well as other temples in Cambodia and Egypt that placed storytelling, architecture, and light in conversation with each other. Using these techniques, Vargas tells the stories of indigenous groups and other people of color.

“What makes this piece more than just a mural is the fact that I like to mirror the communities where my murals are at. I usually pick people from the community to be a part of it. There is an element of wanting to celebrate the people the are forgotten or not seen,” Vargas said.

In addition to the young Tongva girl, his piece also features two angels, one of the faces is of his mother and the other one is modeled after a homeless woman who has witnessed the development of his mural at the intersection of Hill and 5th Street.

#TheArtOfLove Meet Mary from my #dtla community. I see her often here in her wheelchair while I'm painting #Angelus , and we got to talk this morning before I started working… Today she told me that the eyes of the Tongva girl, "are brown like her eyes"… That "they look at her as if to say, everything is going to be alright Mary" and she "found her guardian angel"… It's the relationships that people form with the wall and the process. Today I'll paint for Mary. ??❤? Painting *the largest mural in the world (by a single artist) in the heart of Downtown Los Angeles. #Angelus #mural ? Located at: 5th & Hill streets, working everyday 7:30am -4pm, for the next two months! #communityfirst #EndHomelessness #humanconnection #love #creativeprocess #forthepeople #RobertVargas #robertvargasart #mydtla #roots #OnlyFamilysApart #CANTSTOPWONTSTOP?#freehand #LA #BornAndRaised #myopus #arthistory #lamurals #Determined #legacy #nogrids #noprojections #nostencils @unitedway

Vargas’ work highlights representation at a time when many communities of color face a hostile climate nationally. His work was not designed under a racially and politically charged national context and yet its visual is timely.

“The message that I was trying to put together didn’t have much to do with what was going on today, however, it has become more relevant. All of the themes of inclusivity and hope were already a strong foundation for this mural, so given the way the social, the political climate is seems timely,” Vargas said.

In addition to the mural’s celebration of Los Angeles and inclusivity, Vargas’ work is striking because of the technique he employs. He is not using a grid, or stencils, only a four-inch thick brush.

“I am probably rendering 30 strokes, 40 strokes per square foot. I am painting the wall 40 plus times over…because there are so many layers,” said Vargas. “The flesh tones are several layers deep. It isn’t just one flat color. I am mixing it on the surface.”

The mural will be completed some time between late January and early February. The finished mural will also include the image of a Japanese woman holding a pitcher of water that will move with shadows to show movement in the image of the L.A. River. The mural will highlight other natural elements and people that represent Los Angeles. In addition to the mural’s debut, Angelenos will be able gather in Feb. 9 to witness the change in shadows and light, and see a change within the mural that highlights indigeneity and people of color in Los Angeles.

Until then, Vargas will continue working on his sky-high art, stroke by stroke, until the mural is completed.

“I’m painting 12 stories high, and you have cars driving by yelling my name, ‘Go Vargas!’ That powers me through.”