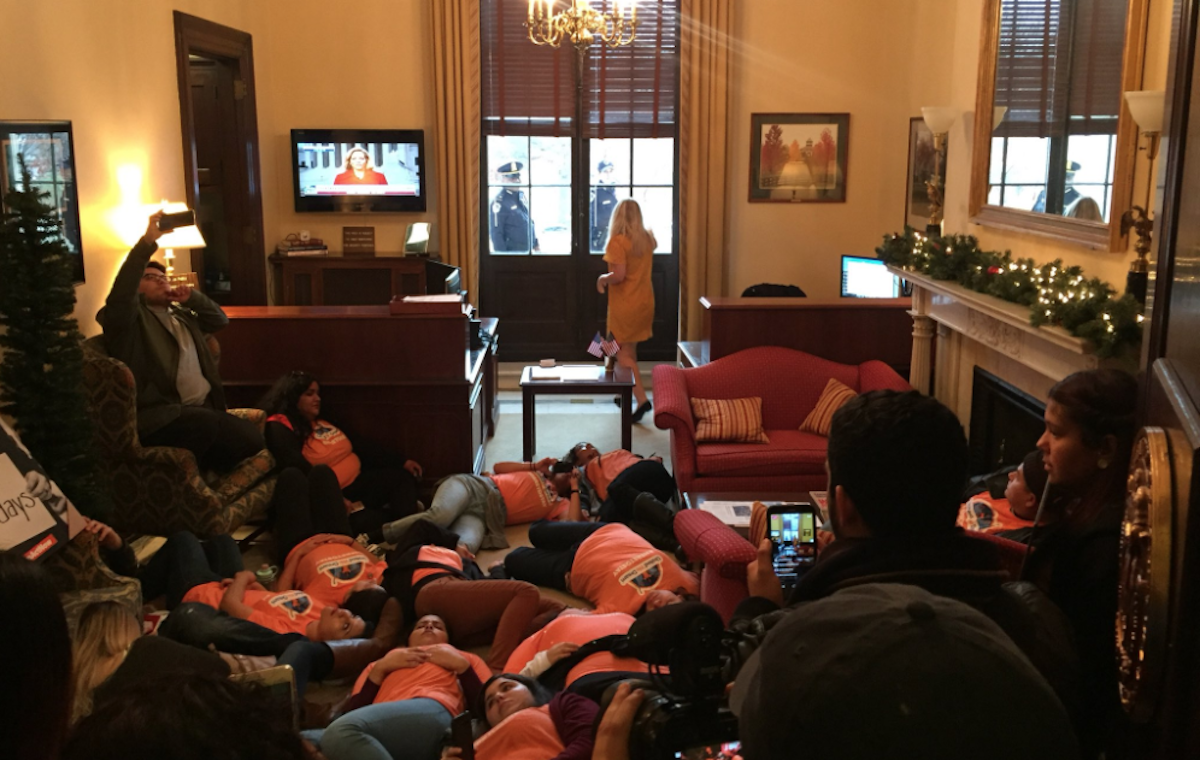 On Tuesday, a group of DREAMers and supporters hold a "die in" inside Senator McConnell's office demanding legislative fix for DACA recipients before the end of the year. (Twitter: @aflores)

From California to Maine this week, immigrant youth and supporters organized sit-ins at the offices of elected officials in the hopes of forcing a legislative solution for DREAMers by the end of the year.

The Our Dream Campaign, made up of multiple organizations, including Democracy Spring and Presente, published a schedule of various protests, calling for a “clean” DREAM Act to be included into the federal spending bill. The campaign’s site states that “Republicans need Democratic votes in order to pass the year-end spending bill that keeps the government funded. If we can pressure Democrats —and Republicans who say they care about Dreamers— to vote NO on any spending bill that does not include the DREAM Act, we can get it passed before the end of the year.”

In Phoenix, several members of a group that protested were arrested on Monday at Senator John McCain’s office. The action was part of the campaign and was meant to urge McCain to sign a pledge asking Congress to protect undocumented youth.

Other actions were live-streamed on Facebook. The following video was filmed on Tuesday outside of one of Sen. Chuck Schumer’s New York offices.

A Monday protest from San Diego was also filmed.

In Washington, D.C., the organization United We Dream staged a Tuesday “die-in” at Senate Majority Leader Mitch McConnell’s office to symbolize the lives put at risk due to what UWD says is a lack of action by McConnell and Republicans.

According to United We Dream’s press release, “McConnell says there is no urgency to pass a clean Dream Act this year.”

“He is not taking the lives of over 11,000 immigrant youth who have already lost their DACA [Deferred Action for Childhood Arrivals] into consideration! That’s why I, along with 44 other immigrant youth who are losing DACA protections daily, are taking action,” United We Dream’s Paola Muñoz said in the group’s media release.

UWD hopes to see a legislative change before the holidays.