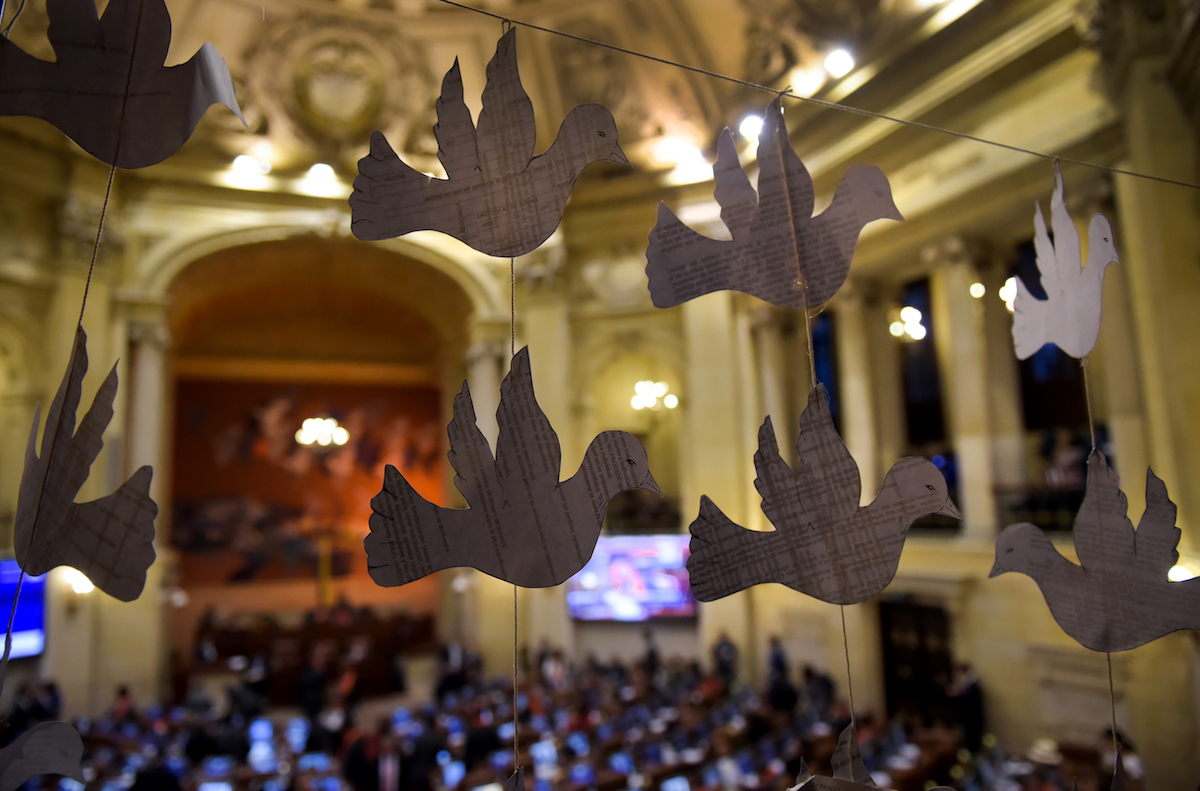 General view inside the Colombian Congress, while people hold a "Cacerolazo" outside demanding the congress to approve the Special Peace Jurisdiction (JEP) and other projects regarding the peace agreement, in Bogotá, on November 21, 2017. (RAUL ARBOLEDA/AFP/Getty Images)

The peace process in Colombia has reached a new landmark.

On November 30, both houses of Congress approved a bill establishing an alternative criminal justice system to judge those accused of war crimes during the country’s 52-year conflict.

But, like every step in this arduous multi-year peace effort, this latest victory was hard-won. For 10 months, congressional representatives who oppose Colombia’s controversial November 2016 peace accord with the FARC guerrillas have used all manner of delays to slow implementation of the complex deal, of which the new criminal justice system is just a small part.

The filibuster is their latest tactic. The strategy of stopping legislation from passing by whatever means necessary occurs in many countries—most famously in the United States, where minority party members can speak for hours nonstop to run down the clock and compel the opposition to amend a bill.

In Colombia, conservative lawmakers have been impeding their country’s peace process by filing nonstop petitions to modify bills while they are being drafted in Congress, and systematically skipping key debates on implementing the Havana accords.

This, to my knowledge as a peace and conflict researcher, is the first time in the world a legislative body has tried to derail its government’s own peace process.

It is a risky move. Numerous international observers, including the United Nations, have warned the government that failure to fulfill its end of the bargain with the FARC could prove a lethal mistake, provoking the former guerrilla group and reigniting war.

Colombia’s peace deal with the FARC has seen powerful opposition since the start. In October 2016, it was narrowly rejected at referendum.

And though in November 2016 President Juan Manuel Santos strong-armed Congress into approving the accords —which had just won him a Nobel Peace Prize—he still needs them to put the deal’s provisions into action.

That’s because while the 2016 peace deal was ambitious in envisioning the goals of Colombia’s transition to peace, the 300-page document —like most peace agreements— did not answer every question that would arise in getting there.

For example, it was up to Congress to interpret, design and determine the details of Colombia’s transitional justice system—a special tribunal for trying war criminals and doling out reparations to victims.

Likewise, the accords assert that former combatants may now run for public office, but can they do so before they’ve been tried and before victims have seen their recompense? And if a FARC fighter is elected to Congress but later found to be guilty of war crimes, must he or she resign?

The peace deal offered no guidance on these troubling questions. Hence, in recent months many conservative politicians seemed hesitant – justifiably, perhaps—to allow former combatants to run for elected office when victims had yet to be recompensed. As a result, a substantial number of lawmakers simply failed to show up to votes on the transitional justice system, making a quorum impossible.

Lawmakers from conservative parties also proposed more than 150 changes to the bill, compelling fresh debate and constant redrafting. Some changes may have been proposed in good faith to improve this imperfect deal.

But in general the cascade of demands to change agreed-upon aspects of the peace deal seems designed to provoke the FARC and slow legislative progress. By mid-November, many feared that the transitional justice tribunal —a critical component of building peace— would never even come up for a floor vote.

The upcoming presidential campaign in Colombia has likewise turned the peace process into a political bargaining chip.

Just over a year ago, just over half of all Colombians voted against the FARC agreement. As an astonishing 53 presidential candidates now jockey to compete in the May 2018 election, avoiding getting into the nitty-gritty of the peace process is just good politics.

As such, presidential aspirants from conservative parties —including the Democratic Center, Radical Change and Conservative parties— are simply refusing to sign anything or vote for or against a particular provision.

And with the Santos administration well into its lame duck period, politicians feel little pressure to negotiate with the president to get things done.

Two Steps Forward, One Step Back

That said, congressional opposition to the peace deal has shown some success in clarifying some of its most vexingly vague provisions. On November 15, the Colombian Constitutional Court issued guidance based on the questions raised in these nonstop congressional debates.

Among the court’s most important rulings was the decision that a former combatant who breaks with the accord —by committing a crime in peacetime, say— will lose the right to such benefits as receiving a reduced sentence.

The court likewise asserted that former fighters may in fact run for office while the victims’ rights component of the peace process is still in development as long as they comply with the requirements of the alternative justice court.

But filibustering remains a risky strategy. The victims’ justice framework, which took 10 months to pass, is not the only law needed to enact the peace process.

To date, the government has begun implementation of only 45 percent of the more than 500 provisions it agreed to in the peace agreements with the FARC.

Next, Congress must figure out how to pass agrarian reform —a longtime goal of the FARC— meet guarantees for political participation and develop a national budget that can actually fund all these peace-building projects.

The FARC’s leadership has so far complied with the agreements, demobilizing its combatants, laying down weapons and joining retraining programs. But the state’s foot-dragging has raised the dangerous specter of recidivism among their ranks. Already, some former FARC combatants have rejoined other armed factions.

Research shows that 60 percent of civil wars relapse within seven years. Historically, those opposed to peace accords have rearmed —as Jonas Savimbi did in the Angolan conflict in 1992— thus re-initiating violence between factions, or used targeted assassinations to upend peace negotiations.

Violence of the latter sort has already derailed more than one attempt to end Colombia’s conflict with the FARC. If Colombia’s Congress keeps up its stall tactics, its country’s peace process may soon become just another statistic.