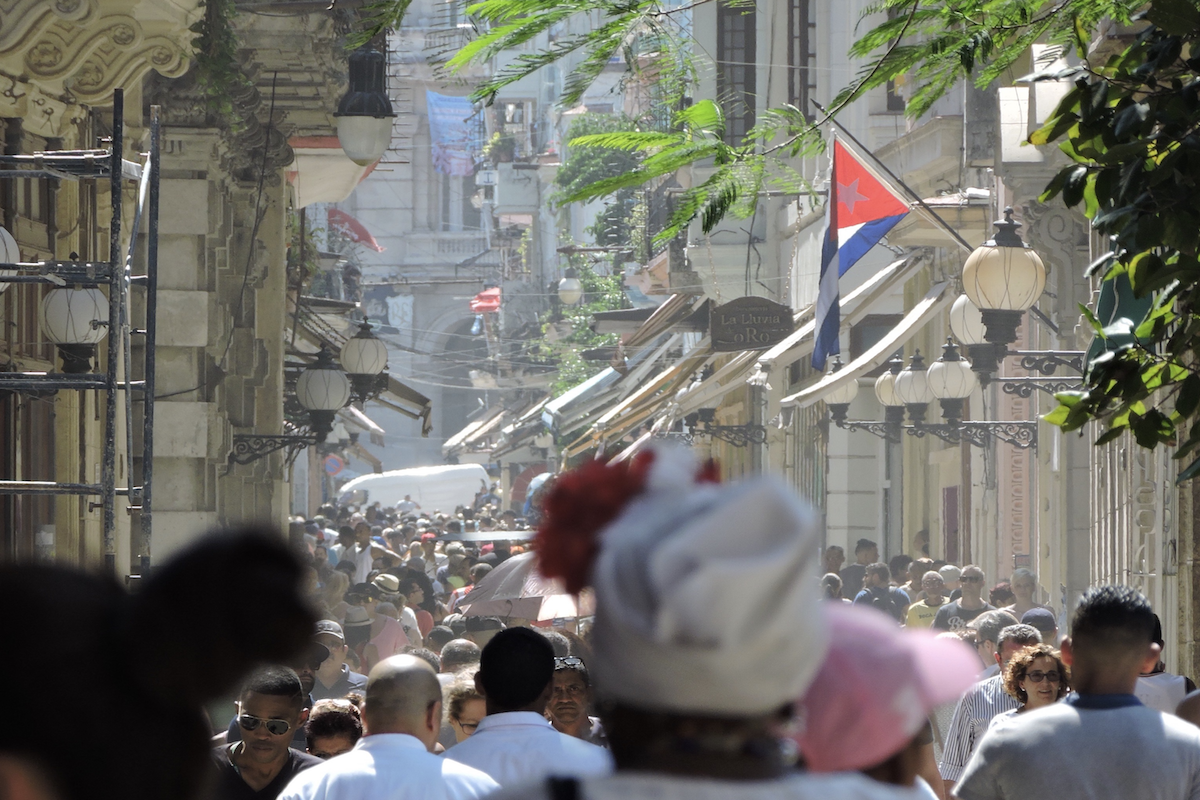 The crowded tourist street of Obispo is where police are known to frequently patrol, question, and card at random. (Photo by Moriah Ray)

When Fidel Castro passed away on November 25, 2016, polarized reactions spread all across the globe. Cuban Americans were seen celebrating in the streets of Miami and Union City, New Jersey, while world leaders from dozens of countries flew to Havana to mourn and express gratitude for the 90-year-old revolutionary leader.

Various countries highlighted Fidel’s solidarity with the African Diaspora. The President of South Africa, Jacob Zuma, gave a memorable speech that emphasized the blood of Cuban soldiers spilled for South Africans against the evil system of apartheid. The Prime Minister of Dominica, Roosevelt Skerrit, reflected on Cuba’s influence on public health in his country. An official U.S. delegation was not sent to Havana—however, Black Americans expressed similar sentiments of indebtedness to “El Comandante,” as referred to by Black Lives Matter in a press release:

“We are feeling many things as we awaken to a world without Fidel Castro. There is an overwhelming sense of loss, complicated by fear and anxiety. Although no leader is without their flaws, we must push back against the rhetoric of the right and come to the defense of El Comandante. And there are lessons that we must revisit and heed as we pick up the mantle in changing our world, as we aspire to build a world rooted in a vision of freedom and the peace that only comes with justice. It is the lessons that we take from Fidel.”

Despite Black Lives Matter’s call for solidarity that transcends borders, there is no mention of solidarity with the millions of Black Cubans who are battling with racial discrimination that the Cuban government refuses to directly address. How has this undying loyalty to the “anti-racist” legacy of Fidel Castro abroad led to the erasure of the repression of Black Cubans at home?

In 2015, President Barack Obama readjusted the 54-year-old United States trade and travel embargo placed on Cuba in 1960. One of the many changes was an ease on travel restrictions. Since then, U.S travel to Cuba has drastically increased, with African Americans representing one of the largest demographics of American tourists.

African American tourists are eager to explore the country that claims to have solved racial discrimination, and has pledged to protect Black radical activists from the 1970’s, such as Assata Shakur and Nehanda Abiodun. Popular travel agencies catered towards African-American tourism, such as Travel Noire and Global Jet Black, have launched week-long trips to Cuba that have helped expand the agencies’ popularity. Nonetheless, many Black Americans leave the island dismayed at the level of racial discrimination they have personally experienced and/or witnessed, challenging the “raceless” rhetoric presented by the Cuban Revolution.

As co-founder of The African Diaspora Alliance —an organization dedicated towards global Black diaspora solidarity through education and travel— I think it is important to examine and critique the contradictions of Black Americans’ romanticization of Castro’s revolution.

My organization facilitates tours to Cuba centered on solidarity with anti-racist activists, artists, and community groups. Having lived and worked in Cuba for over two years, I have witnessed my clients’ shock when they are exposed to the reality of racial discrimination in Havana. On several occasions, our clients have been mistaken as Cuban and therefore have come face-to-face with the anti-Black police practices that mirror New York’s “stop and frisk” and apartheid South Africa’s practice of “carding.”

While facilitating a tour in January of 2015, we took our group to a popular wifi park to let their families know they had arrived safely. One of our clients, a broadly built Black man, started getting aggressively harassed by police. The officer was asking for the man’s identification card, commonly referred to as a “carnet” in Cuba. After realizing that our client did not speak Spanish and was not Cuban, the officer quickly apologized and continued patrolling. I have witnessed this type of behavior multiple times, often carried out by police in plain clothes on the Malecón, and other popular social spaces for tourists and Cubans. The interrogations are often justified by the police insisting that the victim fits the description of someone they are looking for.

Historically, the liberalization of markets has always had an adverse impact on notions of Blackness in Cuba, and have led to the increase of racial discrimination. As the Soviet Union crumbled in the early 1990’s, it caused a major economic crisis that forced Cuba to reshape its nationalized market. As Cuba reopened its tourist industry, a unique paradox resulted—the increased commercialization of Afro-Cuban culture yet the increase of anti-Black racism and erasure.

In 2013, Afro-Cuban scholar Roberto Zurbano published an article in the New York Times, arguing that “in the last twenty years Black Cubans have suffered a reversal or paralysis of the great social mobility that propelled them from 1959 to 1989.” Zurbano’s article highlighted the lack of Black representation in the Cuban government, and the limited opportunities for Black Cubans in the private sector.

“Here the craziest are the police who do what they want with people, and no one can do anything,” Méndez shared with me. He argued that Black Cuban men and women are targeted the most, as they are assumed to be prostitutes or not from Havana.

Méndez stated that since relations with the United States have shifted, American tourists have begun flooding Havana Vieja. He says he has noticed an increase of police presence, which he believes is directly related to the increase of tourists. Méndez shared that he is frequently carded and harassed by police. He makes sure to carry his identification card with him at all times.

Other young Black men and women expressed similar experiences. After being questioned, they are taken into the police station and interrogated further, especially if they are caught without their identification card. After being held at the station for hours, they are let go and ticketed for working without an official license or loitering.

Living and working in Havana is considered illegal if one does not have a permanent address there. Migrants from the eastern region of Cuba often move to Havana in search of better opportunities. The island’s eastern region is known for having a much larger Black population than Havana, including descendants of Haiti and Jamaica. The criminalization of Black Cubans in Havana is rampant, and the degrading process of being publicly searched and questioned is dehumanizing.

Activist organizations like Black Lives Matter that claim the “global” fight against white supremacy must use their platform to speak out against the prevalence of racism in Cuba, despite the historic relationship Cuba has had with Black activists abroad. In addition to ideological questions, such as whether Marxism and the anti-racist struggle are compatible, Black American activists must examine the contradictions, erasure, and isolation they are contributing to by refusing to openly critique the Cuban Revolution and its leaders. If not, their silence suggests that some Black lives (Assata Shakur) are worth more than others—the six million or more Afro-descendants living in Cuba.

The narrative of Fidel’s role must be recontextualized and reflected upon as an anti-imperialist revolution not an anti-racist one. The difference is important to address in order to properly align the narrative without discrediting the revolution’s contributions to movements throughout the Black Diaspora.

Moriah Ray is a writer, researcher, and transnational organizer with a unique background shaped by academic field research and lived experiences throughout the Black diaspora. She is a graduate student at New York University in the program of Caribbean and Latin American Studies. Ray also is co-founder of The African Diaspora Alliance, an organization that connects Afro-descendants across the globe through education and travel.