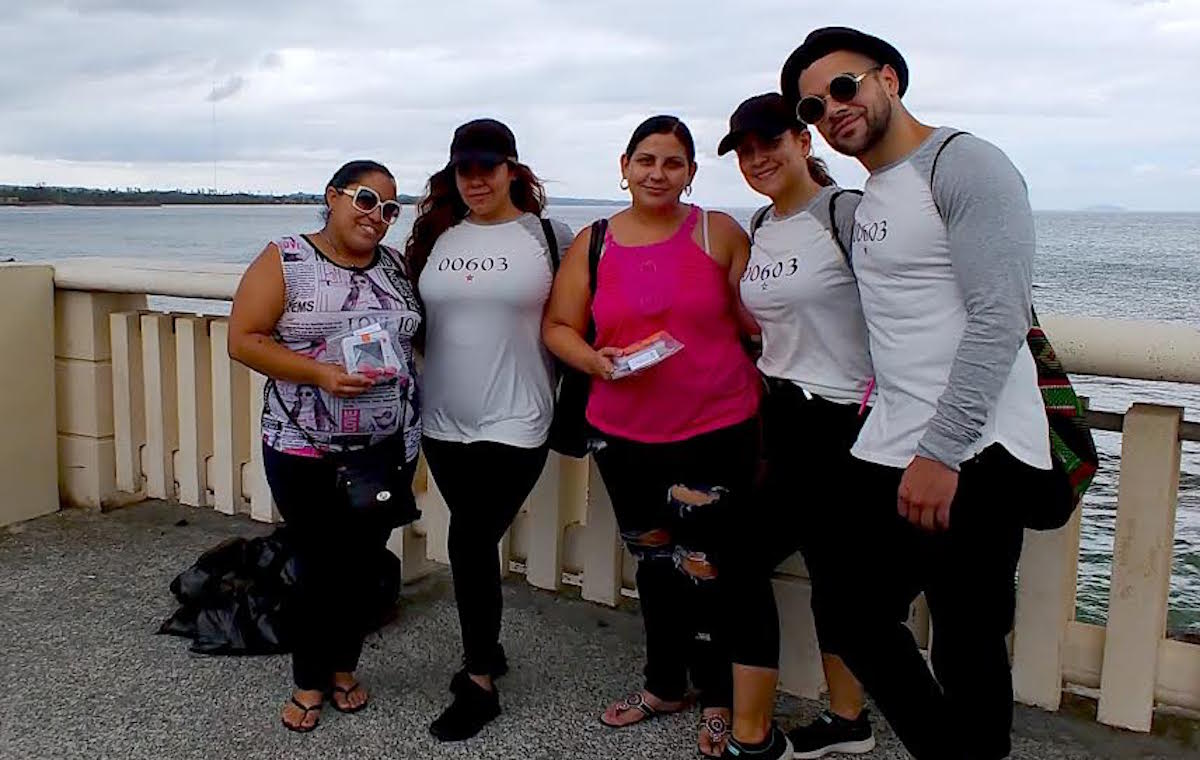 Jillian Valentin, Lisann Valentin and Omar Torres (with matching t-shirrs) in Aguadilla, Puerto Rico, as they started their day with two recipients of solar lights. (Courtesy of Lisann Valentin)

“It isn’t over,” says New Yorker Lisann Valentin. Nearly three months have passed since Hurricane Maria ravaged her mother’s beloved birthplace on September 20, destroying tens of thousands of homes. The official death count is in the low 60s, but reports indicate the count could be as high as 1,000. When the storm, the entire island of Puerto Rico lost electricity, leaving survivors to pick up the pieces of their scattered lives in the dark.

As of late November, power generation on the island was only at 53.4 percent (it was at 63.5 percent as of December 14). Many areas were —and are— still without power, including Aguadilla, where Valentin’s mother is from. With the country in crisis and its 3.5 million residents seemingly forgotten, Valentin and her family gathered together, hatching a plan to bring light into the darkness.

“Puerto Rico is usually full of lights this time of year so we want to give at least one neighborhood something to celebrate,” Valentin shared on the #LetsLightAguadilla campaign page. Aguadilla, she added, is the place of their childhood summers. “Of course we want to do everything we can to support our beloved pueblo post-Hurricane Maria.”

Valentin (a lawyer and actress) and her sister, Jillian (a singer and artist) joined forces with their mother, Elisa (a retired engineer), and friend Omar Torres. The group shared their message and hashtag through their personal networks and across social media, asking friends and strangers alike to help them meet their goal of bringing 200 LuminAID lights to the people who so desperately need them. The group was featured on their local news channel just hours before departure. Their efforts paid off with trending status on Instagram and the campaign was tweeted out by ABC’s “The Good Doctor” actor Nicholas Gonzalez.

The entire trip, she says, was self-funded, and noted that JetBlue did not charge her team a checked baggage fee for the six suitcases packed with over 300 lights.

Each light, Valentin said before leaving for Aguadilla, would be personally delivered to survivors. Invented by architecture students Anna Stork and Andrea Sreshta after the Haiti earthquake in 2010, the lights pack flat for easy storage and —in this case— travel, inflating into lightweight, waterproof lanterns. They are designed to last up to 16 hours with seven hours of solar charge. Because they don’t require external batteries or electricity for operation, the lights can be used immediately in disaster zones.

The company, which started with a crowdfunding campaign and was featured on ABCs “Shark Tank,” bills itself as a “for-profit company with a social mission to make light more accessible and sustainable for all.” Valentin notes that LuminAID provided a 50 percent discount to her team.

“You know, the look in [the residents] eyes, the joy over a small light… the gratitude they expressed over a small act of kindness…” an emotional Valentin began after her returning home. “When you hear their harrowing experience of Hurricane Maria, you can’t contain your face or hold back your tears. They still somehow manage to remain positive.”

“We were there before the hurricanes and Aguadilla isn’t the same. Puerto Rico isn’t the same,” Valentin continued. “Power lines splayed out everywhere, roads destroyed, garbage piled up, houses without roofs—without tarps, figuring out how to drive through areas without street lights, mosquitoes en masse, no water at all or the water coming on and off, homemade signs everywhere with arrows, proclaiming ‘No Power Since Maria – This Way,’ people with diabetes explaining their daily routine to get ice for their insulin… It’s too much. It’s inhumane.”

They slept on the way, and stayed up all night delivering lights house to house and showing Aguadilla residents how to use them. Each light was labeled with the name of the person who donated it.

“As we gifted each light to a person in Aguadilla, we told them who the gift came from. This detail personalized it,” Valentin said. “One contributor [celebrity stylist Ryan Nickulas] even got a message of thanks on Instagram from a recipient.”

Valentin and her team had the privilege of water and electricity where they stayed while in Puerto Rico, but the devastation they witnessed hit home still, most notably for her mother, who lived in Aguadilla until she was 10.

“She cried on the way home,” Valentin remembers. “She said, ‘If I had been living here, this would be me.'”

For those with ties to Puerto Rico, like Valentin and her team, the devastation is so much more than a half-noticed headline—it is palpable. As recently as November 20, telecommunications were still only at about 75 percent capacity and cellphone service was reported to be at 65 percent. One in 10 Puerto Ricans still lacked access to potable water. On December 5, LuminAID tweeted that one million people were still without power.

Families in #PuertoRico are still struggling to recover. Nearly 1 million are still w/out power. Send safe solar light to families in need, and more ways to get involved: https://t.co/OA9xD5TBnv https://t.co/pto4qMlccn

Now that she’s home, Valentin has had some time to process the emotions from her trip.

“My heart is full from the love and generosity of spirit of these Americans, as well as from the sadness I feel,” she said. “Because as Americans living on the island —as opposed to the mainland— they do not have basic necessities, and it’s almost three months after Hurricane Maria.”

Valentine’s concern with the island’s continued disaster status —and what that means for residents— is more than valid. Aid to the island has been frustratingly slow, spurring Monday’s meeting of a United Nations expert on extreme poverty and human rights with hurricane survivors. To date, about $5 billion has been allocated by a spending law for Puerto Rico’s recovery and billions more for government agencies providing disaster relief. But it’s not enough. Hurricane Maria caused a minimum of $30 billion in damages.

“It isn’t over. There’s so much more to do,” Valentin said emphatically. “I’m so thankful for those who haven’t forgotten Puerto Rico.”