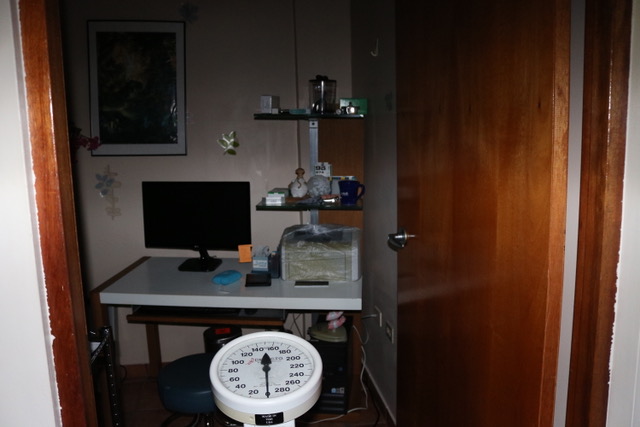 One of the doctor's offices with no power at Plaza Miguel Medical Center in Trujillo Alto, Puerto Rico, during the middle of November. (Photo by Marlena Fitzpatrick)

TRUJILLO ALTO, PUERTO RICO — It’s been more than three months since Hurricane María has directly impacted the lives and health of Puerto Ricans. Already dealing with a health crisis as doctors leave the island in record numbers, hospitals and clinics have been struggling to care for their patients.

“We have no other choice but to see patients in these conditions. We connect a little fan, drink lots of water and we can’t be here more than two hours,” Pérez said. At the time, Plaza Miguel was seeing patients two hours a day, three times a week, she added.

“I don’t think any physician works full-time. Generators are for emergencies,” Pérez explained. “They will fail after the third week because they’re not designed to go on and on.”

Adding to the problems, the cost of diesel was approximately $90 for two days of constant generator use, according to Pérez. The unsustainability of these emergency tools may have resulted in the loss of life. Reports about María’s death toll have raised serious questions among officials and the Puerto Rican community. Speaking about the accuracy of the initial government reports (the official death count is now at 64), Pérez responded, “It is not [accurate].”

Pérez told Latino USA that many doctors shared stories of people losing their lives from the hurricane’s destructive path or from the immediate post-hurricane conditions, when there was no power or communications throughout the entire island. A December 7 report by Puerto Rico’s Center for Investigative Journalism in collaboration with Latino USA and Latino Rebels revealed more than 1,000 deaths occurred in Puerto Rico during the months of September and October, when compared to September 2016 and October 2016.

The long-term lack of power also puts into question the training given to doctors in medical school on how to deal with disaster like Hurricane María.

“We’re a tropical island. There are protocols to work in emergencies from five days to a week with no power,” Pérez said in November. “We know what to do. Usually when a storm is coming, I will have one of my staffers call our most vulnerable patients and advise them what to do. We have all these little systems—put stuff under the bed since it’s the coolest part of the house, for example. But there’s no way to be prepared for over 62 days with no power and some without water. No one was prepared for this. This wasn’t a disaster. This was a catastrophe.”

In addition, Pérez explained, doctors continue to leave the island—a fact that concerns her and others.

“We are very worried as we speak,” she said. “Fifty percent of the doctors that were here in January 2017 are going to leave or have left already. Their strategy is to get out. Many patients ask me if I’m staying. I stopped answering the question, because my practice has become unsustainable. This is the reality for a lot of doctors since there’s no public health system in Puerto Rico. As for others, many Puerto Ricans leaving are doing so for health-related issues. I’ve advised people to leave, especially those in need of diabetic insulin, suffered heart failure and have COPD [chronic obstructive pulmonary disease]. If I leave my country, it’s because I have to, not because I want to.”

The Urgency for Medications

“Medications are the main challenge,” said Fuentes, speaking about the obstacles facing Puerto Rico now. “Merely donations. We used to ‘trick or treat’ volunteer doctors here for medical supplies and medicine. Now, we rely on donations from the outside. Pallets are lost as they’re bundled with many other pallets, as I wait in the airport. That has been the rule of the land since day one. If not FEMA [Federal Emergency Management Agency], you have the office of the First Lady [Beatriz Rosselló] meddling. If donations are not clearly marked, FEMA ceases the donation.”

There are reports of pharmaceuticals, universities, peer networks sending donations that have failed to be distributed. As a result, Pérez and Fuentes predicted the health catastrophe to be outbreaks of more conjunctivitis, dengue, zika, other viruses, and health-related issues due to poor nutrition like diabetes.

To help, they suggested to send money to buy the supplies locally. If donating, be practical, they said.

“We don’t die from having the same clothes. Give us medication,” Fuentes noted. “We don’t need fancy medication. What we need is OTC [over-the-counter,] anti-diarrheal, aspirin, anti-itch, repellent, pain killers and allergy medicine. We need acid reflux medication because we’ve changed our diets. We need water solutions that are good for one hundred thousand gallons, not countless bottles.”

“We can’t count on the government,” Pérez said. “I got involved by uniting with my peers, like Iveliz Fuentes. Here I am, send the help directly to me and the list of organizations, I will provide.”

This story was made possible as part of a Puerto Rico reporting grant by the Ford Foundation.