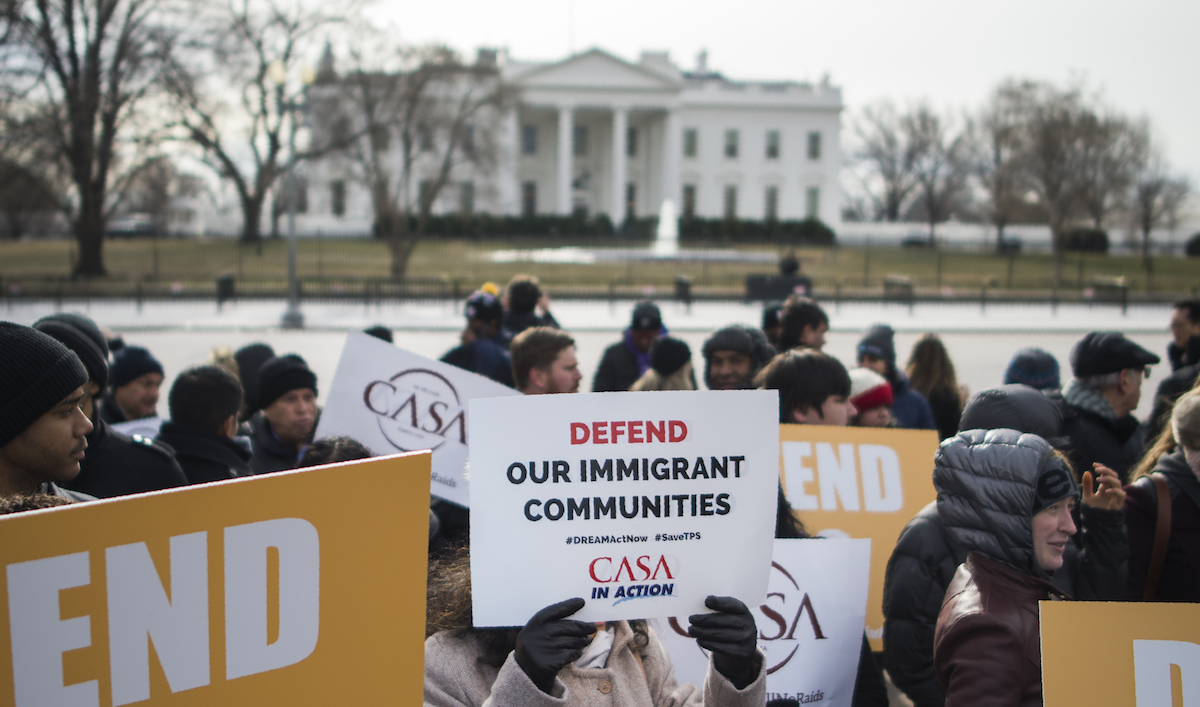 Immigrants and activists protest near the White House to demand that the Department of Homeland Security extend Temporary Protected Status (TPS) for more than 195,000 Salvadorans on January 8, 2018 in Washington, DC. (ANDREW CABALLERO-REYNOLDS/AFP/Getty Images)

In response to the Monday morning announcement that the Department of Homeland Security will terminate Temporary Protected Status (TPS) designation for El Salvador on September 9, 2019, several immigration and Latino organizations have sent statements to Latino USA. Here is a sample of the statements received over the past few hours:

“It is reprehensible to separate families that have been working hard, playing by the rules and paying taxes,” NHCSL President and Pennsylvania State Representative Ángel Cruz said. “The Government of El Salvador has said that the Central American country is not equipped to receive a sudden influx of 200,000 individuals. We all know that the security conditions in Central America are also very dangerous. The Administration needs to understand that most of these legal immigrants have US citizen children and that rescinding TPS means that either these American kids will need to live in foster care or with relatives, or go to a country they don’t even know.”

“Disrupting our economy and tearing children away from their mothers and fathers is not only wrong, it is un-American,” Arturo Vargas NALEO Educational Fund executive director said. “We urge Congress to pass a legislative fix in the next 18 months that will allow these hardworking Americans to continue to keep their families together, contribute to their communities, and grow our economy.”

“To no one’s surprise, the Trump administration’s war on immigrant families unleashed another thoughtless decision today, by ending TPS for over 200,000 Salvadorans. The decision followed similar rulings aimed at ending the protected status of more than 300,000 people from 13 countries currently living in the U.S. and is in line with President Trump’s dimwitted anti-immigration policies,” Ben Monterroso, Executive Director of Mi Familia Vota said.

“It was the Bush administration that first included El Salvador in the humanitarian program after a massive earthquake in 2001 left the country’s economy and infrastructure in shatters,” Monterroso continued. “That was 17 years ago, and now President Trump is eliminating the protection of Salvadorans even though social and economic conditions in their home country haven’t improved at all. In fact, they are even worse than in 2001, which is why previous administrations always chose to extend El Salvador’s TPS designation. This decision is shamelessly political, and disregards the financial and social consequences the removal of such a large number of persons will have on local economies as well as the human toll it will have in the Salvadoran community.”

“This is yet another ill-conceived decision by an administration that ignores the immense contributions to our country by immigrants and that has lost sight of the United States’ long history as a safe haven for people who flee danger abroad,” said Bishop Kevin Vann, chairman of the board of the Catholic Legal Immigration Network, Inc., and bishop of the Diocese of Orange in California. “By terminating TPS for El Salvador, hundreds of thousands of people, including U.S. citizen children and extended family, will be faced with wrenching decisions about how to proceed with their lives. The administration fails to address how it makes the United States any safer to expel people who have been living and working legally as valued residents of our country. Instead of withdrawing their protections, our government should welcome these long-term, settled members of our communities and find ways to give them a permanent path to residency.”

The Leadership Conference on Civil and Human Rights

“Today’s announcement is heartbreaking, immoral, and simply inhumane. Salvadoran TPS holders have relied on this humanitarian protection to safeguard them from being deported to a country that continues to experience extreme violence and extraordinary conditions,” said Vanita Gupta, president and CEO of The Leadership Conference on Civil and Human Rights.”They are hardworking, contributing members of our society who pay taxes and bring stability to our economy and national security. This decision will harm nearly 200,000 Salvadoran TPS holders, and their over 190,000 U.S. citizen children. Hundreds of thousands of families will be torn apart by this administration’s senseless decision if Congress does not come together immediately to find a humane solution for TPS holders.”

“It is embarrassing for this country to not even consider the real contributions our community has made for decades. Ignoring our contributions is ignoring our lived realities,” Vanessa Velasco, TPS holder from Northern California, said. “And a direct attack to hundreds of thousands of US Citizen children that will grow up knowing their lives are not considered in this political theater. Our struggle is far from over, we stand strong and proud, and we will continue to fight.”

“To disregard the contributions that El Salvadorans have made in communities across this country by stamping an expiration date on their lives here is inhumane,” Amanda Baran, Consultant to the Immigrant Legal Resource Center, said. “Salvadoran TPS holders are our colleagues and neighbors, and the economic engines of our construction and service sectors. El Salvador is one of the world’s most dangerous countries and will be unable to absorb the return of these thousands of people whose lives are inextricably intertwined with those of ours here in the United States.”

“Ending TPS for El Salvador is a tragic decision. It’s devastating for the 200,000 people who have lived and worked here legally for nearly 20 years, as well as their families, their employers, and their communities. Conditions in El Salvador continue to place people’s lives in grave danger,” Royce Bernstein Murray, policy director of the American Immigration Council, said. “Who gains when we take away lawful status from hundreds of thousands of people, many of whom have lived here, paid taxes, and registered with the government for nearly 20 years? TPS holders have provided their personal information, undergone background checks, and in 18 months will lose their ability to work lawfully and support their families. Since the administration won’t protect them, Congress must seize this moment to provide a legislative fix.”

“Today, the number of people affected by Trump’s decision to end TPS programs one-by-one increases to over 250,000 immigrants from four countries (El Salvador, Nicaragua, Sudan and Haiti) who came here after fleeing devastating natural disasters or violent conflicts in order to save their lives. This decision also sends a terrifying message to those from the remaining six countries who currently still have TPS but could lose it as soon as Trump has a chance to terminate their protections too. In one swift blow, the Trump Administration has left over 200,000 people vulnerable to deportation. The majority have been living here for nearly two decades, own houses, do critical work, and are parents to almost 193,000 U.S. born children.”

“This is a deeply disappointing decision that will not only disrupt the lives of TPS recipients and their families, but devastate the local economies they have contributed to for years,” said Ali Noorani, Executive Director of the National Immigration Forum. “Congress has a responsibility to act in the best interest of our nation by legislating a permanent solution that allows current TPS holders to contribute fully without fear of deportation.”