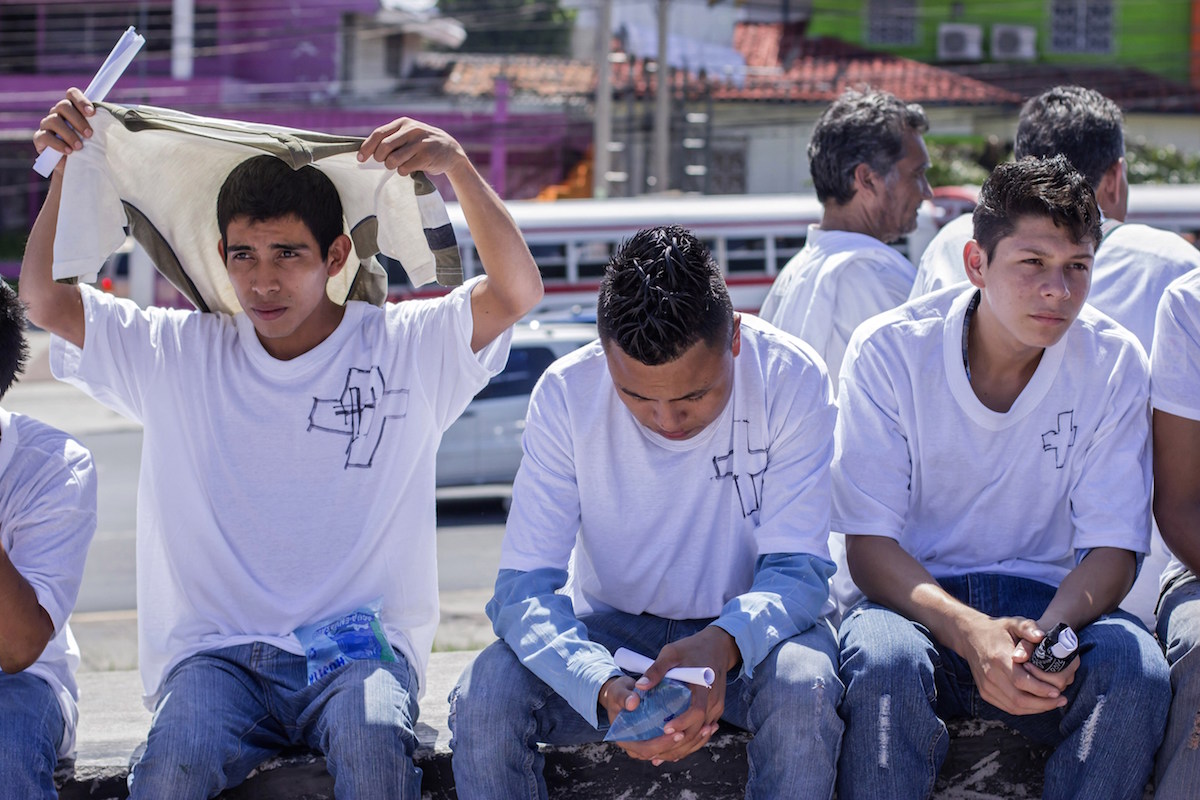 Young people among whom some were presumed members of gangs, participate in an ecumenical concentration for peace in El Salvador. (Marvin RECINOS/AFP/Getty Images)

EDITOR’S NOTE: The opinions expressed in this piece are solely those of the author and do not reflect the views of Latino USA. This is a roundup of material from The Conversation archive.

The Department of Homeland Security has confirmed that it will eliminate the Temporary Protected Status that gave provisional U.S. residency to Salvadoran migrants after a 2001 earthquake. Some 200,000 Salvadorans now have until Sept. 9, 2019, to leave the United States, obtain a green card or be deported.

According to a January 8 DHS statement, the decision was made “after a review of the disaster-related conditions upon which the country’s original designation was based,” which determined that they “no longer exist.”

Immigration advocates have condemned the move, saying it overlooks El Salvador’s extreme violence, which has surged since the Bush administration first offered Salvadorans protective status. With 81.2 murders per 100,000 people in 2016, El Salvador is the deadliest place in the world that’s not a war zone. More than 5,200 people were killed there in 2016.

How did El Salvador become so violent? These four articles shed some light on the country’s complex crime problem. Spoiler: It’s not just about the gangs.

The truth is quite the opposite, writes Florida International University professor José Miguel Cruz.

“The street gang Mara Salvatrucha 13, commonly known as MS-13, was born in the United States,” he explains.

Formed in Los Angeles in the early 1980s by the children of Salvadoran immigrants who’d fled that country’s civil war, MS-13 was at first just “kids who met hanging out on street corners,” writes Cruz.

It wasn’t until the early 2000s that the group spread into Central America. There, it has brutally deployed extortion, human smuggling and drug trafficking, terrorizing neighborhoods and helping to turn the so-called Northern Triangle –El Salvador, Guatemala and Honduras– into the world’s deadliest place.

El Salvador may be particularly dangerous, but it isn’t the only Latin American country facing a homicide epidemic, writes Robert Muggah, a Brazilian crime researcher.

As a whole, “Latin America is where the most murders in the world happen,” Muggah writes. Home to just 8 percent of the world’s population, the region sees over 38 percent of global homicides. Every day some 400 Latin Americans are killed.

Many factors contribute to this homicide epidemic, according to Muggah, including “the war on drugs, abundant unlicensed firearms, persistently unequal gender relations and, in Mexico and Central America, thousands of marginalized, uprooted, and sometimes convicted U.S. deportees.”

Governments have responded to rising violence by sinking money into police forces, prosecutors and prisons. It hasn’t worked, Muggah writes. Only 20 percent of murders in Latin America results in conviction. And in San Salvador, El Salvador —last year the seventh-deadliest city in the world— just 10 percent do.

3. Women Can Be Targets

For example, in 2015, Honduras had the highest rate of feminicide —or female murder— in the world. Environmental advocates who stand up to illegal mining and other kinds of resource exploitation in Central America are also frequent targets of violence.

Those two facts are not unrelated, Estévez warns. “It’s a common mistake to consider violence against women a private, non-political act. But women are often on the front lines of activism” she writes, because they tend to fight against activities that are “harmful to their children, homes and communities.”

José Miguel Cruz agrees that gangs like MS-13 are not the sole cause of crime in Central America. Rather, he contends, they are “largely a symptom of a far more critical issue plaguing the region—namely, corruption.”

According to Cruz, groups like MS-13 have grown and thrived in El Salvador because the political class protects them. In August, prosecutors there showed that the country’s two main political parties had colluded with MS-13 and other gangs, paying more than US$300,000 for help winning the 2014 presidential election.

The same nexus between government and organized crime has been exposed across Central America, where political institutions routinely shield gangs in exchange for economic support and political backing in the barrios they control. Few are ever prosecuted for this crime, Cruz says.

That erodes Central Americans’ belief in the rule of law, which, in turn, makes it harder to fight violence. “Root out corruption in the Central American ruling class,” he wagers, “and the gangs and crooks will go down with it.”