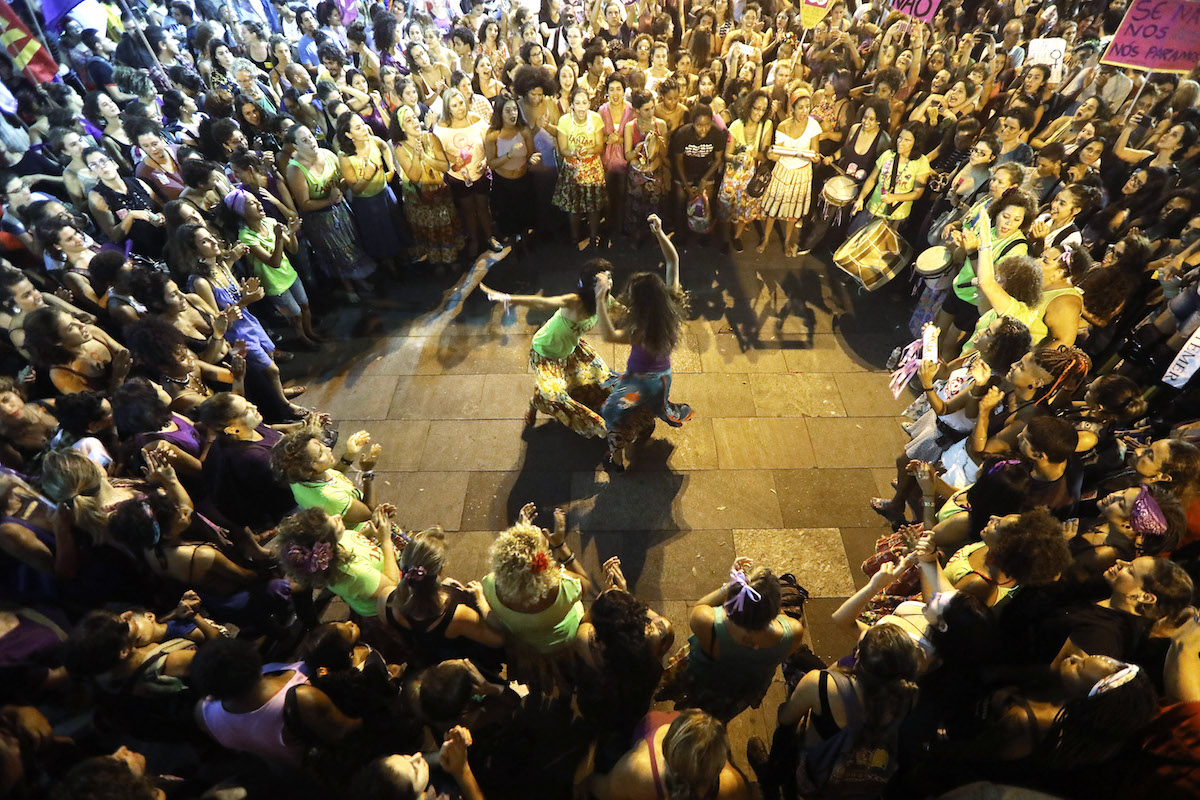 Women’s empowerment recently got a big boost at the Golden Globes, but the United States isn’t the only place having a feminist revival.

In 2015, two years before the #MeToo campaign got Americans talking about sexual harassment, Brazilian feminists launched #MeuPrimeiroAssedio, or #MyFirstHarrassment. In its first five days, the hashtag racked up 82,000 tweets detailing the chronic sexual harassment of women in this South American nation. It soon spread across Latin America in Spanish translation as #MiPrimerAcoso.

The viral success of #MeuPrimeiroAssedio spurred a spate of social media activism in Brazil, where despite decades of feminist efforts gender inequality remains deeply entrenched.

With #MeuAmigoSecreto —#MyAnonymousFriend— women documented misogyny on the streets and at work. Tagging #MeuQueridoProfessor —#MyDearTeacher— university students outed sexism in the classroom.

And when the weekly news magazine Veja described the wife of Brazil’s president, Michel Temer, as “beautiful, modest and a housewife” in April 2016, feminists transformed that stereotype into a meme showcasing empowered women.

As race and gender researchers, we’ve been watching Brazil’s feminist resurgence closely to see whether it reflects the needs of Afro-Brazilian women, who make up 25 percent of the population.

Though the country has long considered itself colorblind, black and indigenous Brazilians are poorer than white Brazilians. Women of color in Brazil also experience sexual violence at much higher rates than white women.

For example, domestic workers, who are predominantly Afro-Brazilian, have been systematically harassed by their male employers. This centuries-old power play dates back to slavery.

Since both of us have recently published books —“The Biopolitics of Beauty” and “Health Equity in Brazil”— examining the impact of Brazilian medical practices on black women, we are particularly interested to see if Brazilian feminists will tackle two issues that particularly affect black women: health care and plastic surgery.

These may seem unrelated to each other and to black women’s rights, but in Brazil they are deeply intertwined. All Brazilian citizens get free medical care under the Sistema Único de Saúde, the national health care system.

Despite universal access to health services, black women do not always receive the best care. Though Brazil’s colorblind approach to health has resulted in scant documentation of differential health outcomes by race, one study found that black women are two and a half times more likely to die from an unsafe abortion than white women.

The startling discrepancy probably reflects a lack of high-quality prenatal and obstetric care for black women, which is a problem in U.S. hospitals as well. Discriminatory treatment by medical professionals, which includes a lack of attention to the specific health needs of black Brazilians, also factors in.

Black activists have also pointed out for decades that Afro-Brazilian women have higher rates of sterilization and abortion, which in Brazil is mostly illegal – and thus very risky.

Overall maternal health is also markedly worse among black women. In Brazil’s impoverished northeast, which has the country’s highest concentration of African descendants, black women are 10 to 20 times more likely to die in childbirth than white women.

In Brazil, white beauty standards remain the cultural ideal. That means many Brazilian plastic surgeons operate on the basis that more European features —facial features in particular— are better.

Specifically, our research has found, they tend to target black women’s noses, which they deem a “problem feature” in lectures, publications and websites.

In conversation, some doctors even expressed their belief that the “negroid nose” is a “mistake” caused by racial mixing. Fortunately, they would add, it’s nothing a nose job can’t fix.

This occurs within a broader culture, familiar to women worldwide, of bombarding all Brazilian women with opportunities to “improve” their imperfect bodies. Brazilians are among the top consumers of plastic surgery in the world. It is estimated that more than a million cosmetic procedures are carried out every year.

Some Brazilian plastic surgeons refer to their jobs as helping women achieve “the right to beauty.” When, in 2016, a famous plastic surgeon who promoted this idea died, his obituary read like that of a national hero.

And since most plastic surgery is covered under Brazil’s public health system, our research uncovered, surgeons have found it lucrative to develop procedures targeting the entire topography of the female body.

Treatments that aren’t paid by insurance come with long-term payment plans. For the poorest patients, doctors have made plastic surgery accessible by exchanging their professional services for permission to use these operations as a teaching exercise for young medical residents.

Taking Online to the Ground

Historically, feminist critiques of this industry were largely subdued. But plastic surgery is now in the spotlight of Brazil’s “Women’s Spring.”

In October 2017, one of Brazil’s biggest newspapers, Folha de São Paulo, ran an article extolling the “ideal vulva” and describing the surgical interventions necessary to attain it. Women lambasted the piece on social media, calling it “absurd,” “unacceptable” and “sad.”

The assumption that some vaginas are more desirable than others, feminist commentators pointed out, imposes the male gaze on the female body. Additionally, they argued, the article’s emphasis on “pink” vaginas and its suggested use of skin-whiteners was patently racist.

Black feminist bloggers likely started this particular line of critique. As early as 2014, they were denouncing Brazilian cosmetic surgery as “racism cloaked as science.” Plastic surgeons, wrote Gabi Porfírio in a June 2014 post on Blogueiras Negras, have become “experts at using demeaning terminology for the noses of black people.”

But in a country where only 63 percent of households have internet access, black feminists also have also used more traditional forms of protest to engage women of color.

A year before the the hashtag #MeuPrimeiroAssedio would go viral, black feminists began working across Brazil to organize women who don’t generally participate in activism. Their efforts culminated in the Black Women’s March Against Racism and Violence and in Favor of Living Well in Brasilia, the capital.

There, 50,000 Afro-Brazilian women of all ages and backgrounds came together to denounce violence against black women —not just sexual violence but also deadly abortions, mass incarceration and medical neglect. It was the first ever national march of black Brazilian women.

In a country that has long ignored inequality, the protest put race squarely on the feminist agenda. By contrasting the diverse forms of violence black women face with the idea of “living well,” the Black Women’s March voiced an alternative vision of racial and gender justice for Brazil.

In doing so, they join #MeToo, #MeuPrimeiroAssedio and a whole chorus of female voices around the globe. Online and on the ground, Brazilian feminists demand equity from the surgeon’s table to the office.