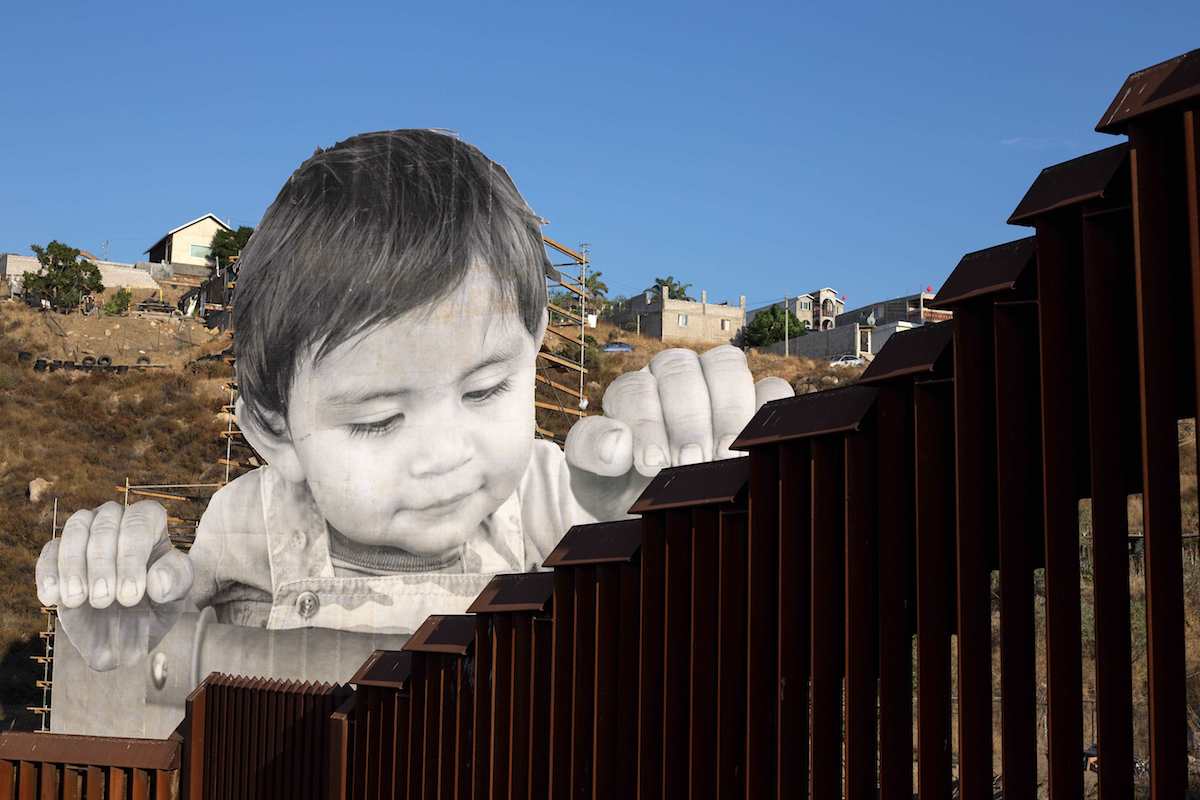 View of an artwork by French artist JR on the U.S.-Mexico border in Tecate, California, on September 6, 2017 (GUILLERMO ARIAS/AFP/Getty Images)

The “Giant Picnic” by French artist, JR, is a set of eyes in grayscale that served also as a picnic table. The eyes of a ‘dreamer’ seem to look out onto the blue sky, as tea and conversations were shared across the table and international demarcation.

A few weeks prior, the same artist erected “Kikito” a gigantic image of a toddler boy peering over the U.S.-Mexico border wall seemingly placed as a way to remind the world of the very humanity that exists beyond the border walls.

Given the increased speculation and rhetoric around border enforcement —including the unveiling of border wall prototypes— how can the arts play a role in informing and swaying public opinion toward a more critical view of the border?

Via Twitter, Donald Trump ended the year by reinstating his call for a revamping of current immigration policies including a threat against a reconsideration of the DACA program if his “beautiful” border wall is not a part of the agreement.

The Democrats have been told, and fully understand, that there can be no DACA without the desperately needed WALL at the Southern Border and an END to the horrible Chain Migration & ridiculous Lottery System of Immigration etc. We must protect our Country at all cost!

Earlier in December, a Department of Homeland Security official, in discussing the measures that the Trump administration is beginning to deter human migration along the United States/Mexico border was quoted as saying, “People aren’t going to stop coming unless there are consequences to illegal entry.”

The reality is that there are consequences, and severe ones, including death, family separation and increased violence against people who attempt to cross the border. In 2017, there have been approximately 300 hundred migrant deaths along the U.S.-Mexico border. This is why we believe that the work of artists can help the U.S. public reimagine where an alternative discussion about the border would begin. The arts have played a central role in forming narratives of identity and place. Whether through music or through visuals, the arts have a particular sensory and discursive power to shape consciousness and understanding of people and spaces.

Artists have long exposed the cracks and vulnerability of the border, including the work of Chicano artist GRONK, when he installed a giant eraser at the border in the early 1980s, the public performance work of Guillermo Gómez Peña, and the Trojan Horse erected by Tijuana-based artist Marcos “Erre” Ramírez, to name a few.

The border wall has been disrupted, re-narrativized and crossed by migrants and artists with dreams of overcoming, crossing, climbing, tunneling or other means of erasing an already porous boundary. These forms of sensorial engagement with the politics of the border are what animate an otherwise inanimate space.

The border region produces the conditions of possibility for disruptive artistic narratives which permit audiences to bear witness to state architecture and narratives of violence while also witnessing the failure of the border phenomenon.

In drawing attention to the Sonoran Corridor and the southern border in Arizona, the work of the Binational Artist in Residency Project (BNAR) comes to mind as the project is in its third year of “connecting cultural communities throughout the Sonoran Desert with ideas of social justice, history, and identity through art and performance.” The first artist-in-residency, visual artist, Ana Teresa-Fernández, painted the border blue as part of her “erasing the border” series. This piece helps the viewers see the wall as fleeting, something belonging to the vastness of the sky rather than metal-cutting into the ground.

Yadira de la Riva’s solo-performance art sews together the community that the border split, her performance at the Douglas/Agua Prieta border was impactful and well-received.

In November, the Schools of America Watch (SOA Watch) organized for the second year in a row, a Border Encuentro—a day of performance events that was attended by audiences on either side of the Nogales, Arizona/Sonora border. These acts/arts of resistance demonstrate the capacity artists and activists have to reduce the power of borders and their increased militarization. Essentially, artists erase the border’s capacity to divide and territorialize.

The movement of both performers and artists actively resisting, as well as the movement of the border walls (as they are demolished, rebuilt, expanded, and are undone throughout history) represents a phenomenon of promise and possibilities through art.

Alejandra Ramírez is a doctoral student at the University of Arizona. Her scholarly interests include global arts and politics, war, conflict, and revolution.

Michelle Téllez is an assistant professor in the Department of Mexican-American Studies at the University of Arizona and is a Public Voices Fellow at The OpEd Project.