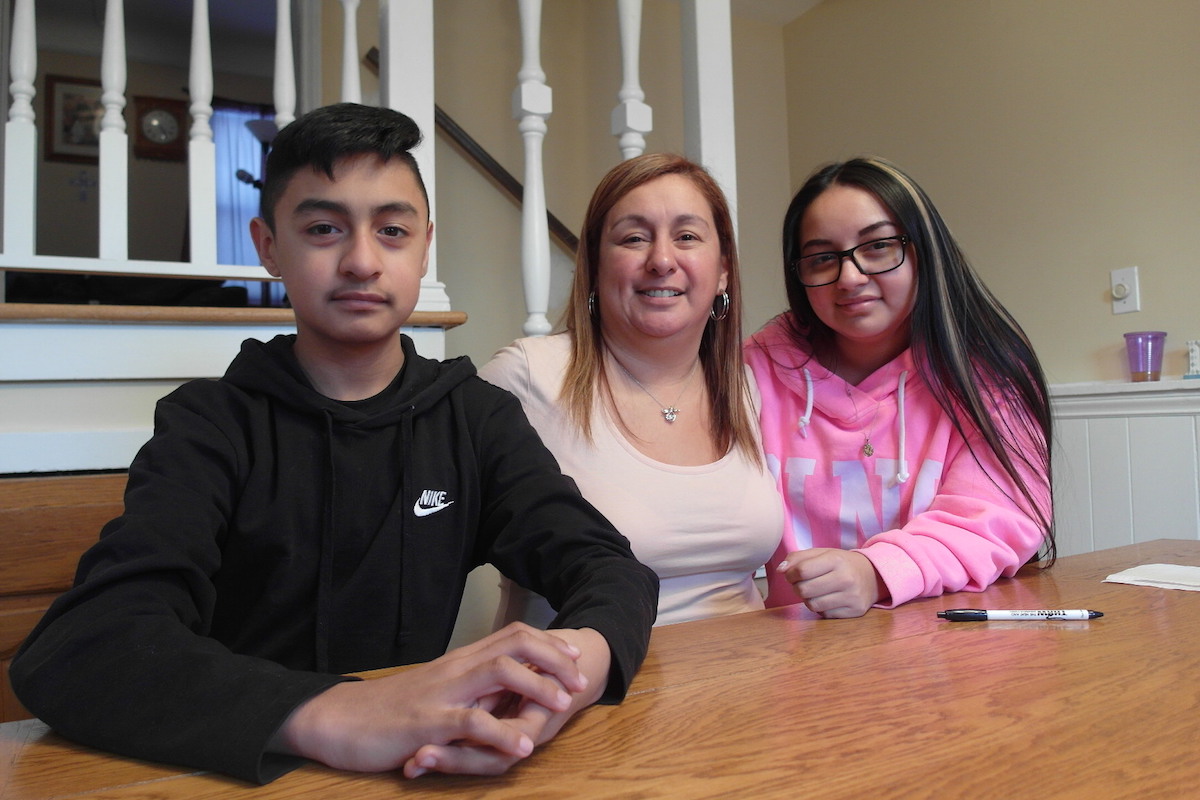 DETROIT — Cindy Garcia is counting down the days to when the cameras stop rolling and reporters stop calling her phone.

The media attention —brought on after a heartfelt video depicting her and her two children making a tearful goodbye to husband and father Jorge Garcia when he was deported at the Detroit airport early the morning of Martin Luther King Jr. Day— has been keeping the family distracted since they were separated.

“That emotional roller coaster gets you, you’re up and you’re down, and you’re on the go and you’re eating on the go and you don’t even know when your next meal’s going to be because, like you’ve seen, you’ve got all these reporters coming at us and my phone is constantly ringing from six in the morning until midnight. They won’t leave you alone,” Cindy told Latino USA.

When the spotlight dims, she said, she will give herself room to cry, let out her emotions and then switch over to thinking about April, when she and her daughter and son will journey to just outside of Mexico City, where Jorge is staying with an aunt whom until he was deported—an aunt he hasn’t seen since he was a child.

Jorge was deported to Mexico after living in the United States for 30 years. A relative brought him to Chicago at age 10, and the 39-year-old has been living in Metro Detroit his entire adult life.

The video, shot by activists who had been fighting alongside the Garcias for his removal order to be lifted, went viral.

What resulted were interviews with CNN, Univision and The Washington Post. Cindy and her two children were flown to New York last week for an appearance on The View. Whoopi Goldberg gave her and teenaged daughter Soleil pairs of slippers from the host’s famous shoe collection. Another network invited the family on a trip to Miami for an in-studio interview.

On Sunday, Cindy, 45, spoke at a women’s march in Lansing, Michigan’s capital. She also attended the State of the State address Tuesday, and is expected to be at the State of the Union address January 30 in Washington, D.C., as an official guest of Congresswoman Debbie Dingell (D-Dearborn). Rapper Chamillionaire has offered the family financial support in the wake of their ordeal.

Once the media has shifted its focus to other breaking news, the Garcias will have to contend with an emptiness in the house that they’ve been fighting off for nearly a decade.

The Garcias first met at a friend’s baby shower. During their courtship, Jorge mentioned that he was undocumented, but Cindy, a United States citizen, assumed any issues with legal status would resolve themselves once they got married.

Over the next 13 years, the couple would find that to not be the case.

In all, they spent more than $125,000 in legal fees, marched in immigrant rights rallies and pled their situation to attorneys, members of the powerful United Auto Workers, Congress and advocates.

Jorge was born in Guanajuato and moved to Chicago at age 10. Like many Mexican immigrants who started out in the Windy City, he made his way to Metro Detroit at 18, looking for better work opportunities and a lower cost of living. He built his career in landscaping. Cindy, who says her father gained his U.S. citizenship when she was 21, grew up in Southwest Detroit, home to Michigan’s largest Latino population. She went on to work at the Ford truck plant in nearby Dearborn and became involved in labor issues with the UAW.

Southwest Detroit sits within view of the U.S.-Canada border. Residents of the neighborhood have long contended that agents overstep their power by enforcing around schools, churches and other places traditionally deemed sanctuaries, while federal officials argue that ICE has policing authority within 100 miles of a border.

Though the couple raised their young family a short drive away from Southwest Detroit in Lincoln Park —a sleepy downriver suburb and home to a growing community of Latinos— that tension was never far from the Garcias’ purview.

The Garcias first appeared before an immigration judge in 2009, when Jorge was handed his first order for deportation. Per the judge’s decision, the family bought a one-way ticket for him, but Cindy fought for a stay in her husband’s removal by tapping into her connections with the UAW.

In November, after being granted several stays from deportation, a judge told the Garcias they were out of options.

“Luckily, he was able to stay for Christmas and his birthday,” Cindy said.

In front of a crowd of supporters and journalists, their battle ended at Detroit Metro Airport on Martin Luther King Jr. Day.

“We want to at least pretend that we’re going on vacation for a happy reason, and not be depressed knowing that on the way back we still have to say goodbye all over again,” said Cindy.

While Jorge is no longer home with his family, his wife said her fight will continue for other families who might benefit from the possibility of passage of the Dream Act or Deferred Action for Childhood Arrivals (DACA), which allows children of undocumented immigrants below a certain age to stay legally in the U.S. Jorge was too old to apply for such relief when the Obama Administration established DACA in 2012.

But maybe, Cindy said, she can use her status as a U.S. citizen to help others who live in the shadows of immigration policy.

“It’s a nonstop thing, but like I told [Jorge], we have to do this to get the word out,” Cindy said. “Now I’m the face of immigration. Now that they’ve put a name to it, they’ve put a face to it, I have to be the spokesperson and keep the story alive until Congress decides to pass the Dream Act. Even though it doesn’t affect my family, it affects the other people that are out there and I have to be their voice, I have to be strong.”