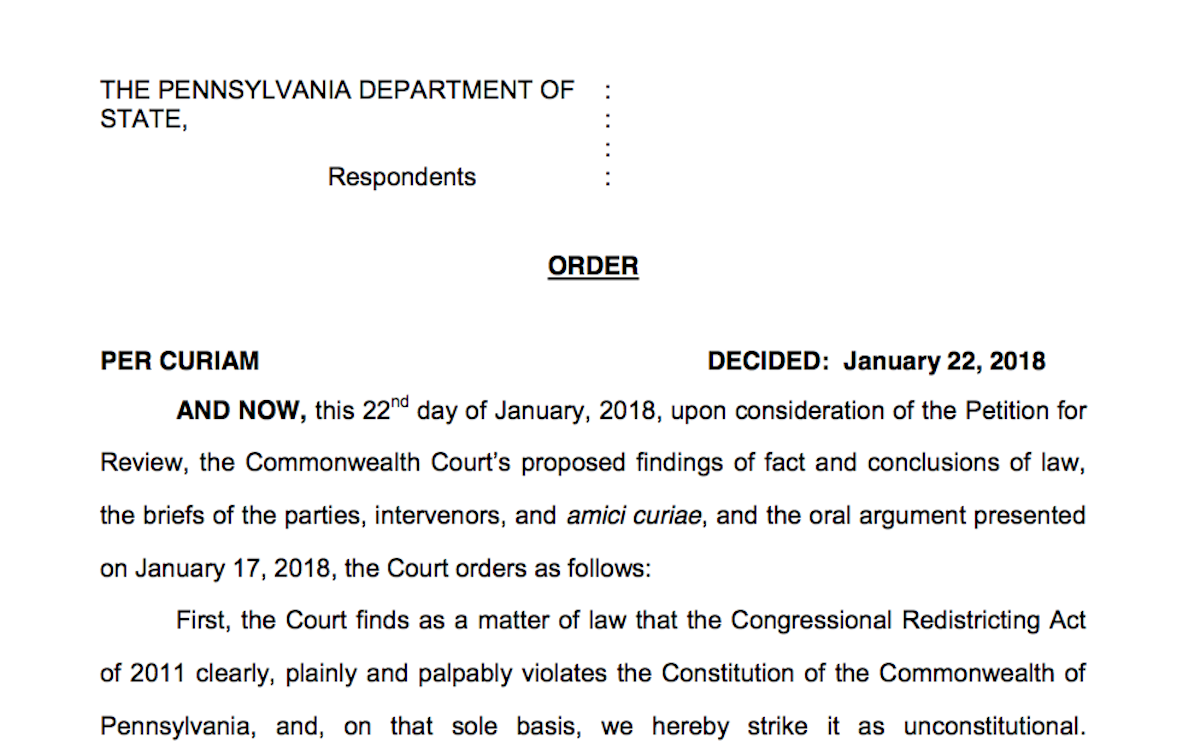 In a landmark decision, Pennsylvania’s Supreme Court ruled on Monday that the state’s congressional map is “clearly, plainly and palpably” unconstitutional and ordered the State Assembly to redraw and submit a new map by February 15.

If the Republican-controlled legislature fails to submit a solution which the governor will sign into law, the Democratic-controlled court will redraw the map by February 19. The court’s order is clear that the new districts will be set before the May 15 primaries.

The decision comes after several lawsuits claimed that the current congressional map was unconstitutional on the basis on partisan gerrymandering, or when a political party manipulates district boundaries in a way that benefits them unfairly. The court agreed.

Since the state map came into effect for the 2012 elections, Republicans have won have won 13 of the state’s 18 Congressional districts.

Governor Tom Wolf addressed the decision in a statement released on Monday. “I strongly believe that gerrymandering is wrong and consistently have stated that the current maps are unfair to Pennsylvanians,” he said.

“Yet another gerrymandered district map thrown out!” tweeted Sen. Sheldon Whitehouse (D-RI) shortly after the court announced its decision.

Democrats indeed have reason to celebrate: some experts say that a new map could flip 3 to 5 House seats towards Democrats, as predicted by Michael McDonald, a professor at the University of Florida who specializes in American elections.

Not only does a new fair PA map likely create 4-5 Dem leaning districts, it disrupts constituencies of Rep incumbents, erasing their incumbency advantage and making them more vulnerable in a Dem wave election https://t.co/I21oVliGHq

“The PA Supreme Court has overstepped its legal authority and set up an impossible deadline that will only introduce chaos in the upcoming Congressional election.”

According to the Pew Research Center, there are 440,000 Latino eligible voters in Pennsylvania, making it the country’s 10th largest Latino statewide eligible voter population (53 percent of the Latino population in Pennsylvania is eligible to vote). According to the current map, congressional district 15, which includes suburbs of Harrisburg and Allentown, is the district with the largest Latino eligible population. Its representative, Republican Charlie Dent, announced his plans to retire in September 2017. There are currently no Latinos on the primary ballot in any of the state’s 18 districts.

The plaintiffs, which include the League of Women Voters of Pennsylvania, argued that the current map was drawn to favor Republicans. A brief submitted to the court on January 5 explains how map-drawers use technological advances to target voters with painstaking precision. “By… analyzing the voters who live in those units on the basis of their demographics, voting history, and party affiliation, redistricting professionals are able to move individual voters into and out of districts in order to achieve partisan ends,” they said.

Pennsylvania is often considered one of the most extreme cases of gerrymandering in the country. In particular, the state’s 7th congressional district, represented by Republican Pat Meehan, has been the object of consistent scrutiny for its odd shape, which barely connects five counties, including an isthmus connecting Chester and Lancaster counties, while avoiding areas like Chester and Reading. David Daley, publisher of The Connecticut Mirror and author of a book on gerrymandering, famously compared the district’s odd shape to Goofy kicking Donald Duck. Democrats have targeted the district, which leaned towards Hillary Clinton.