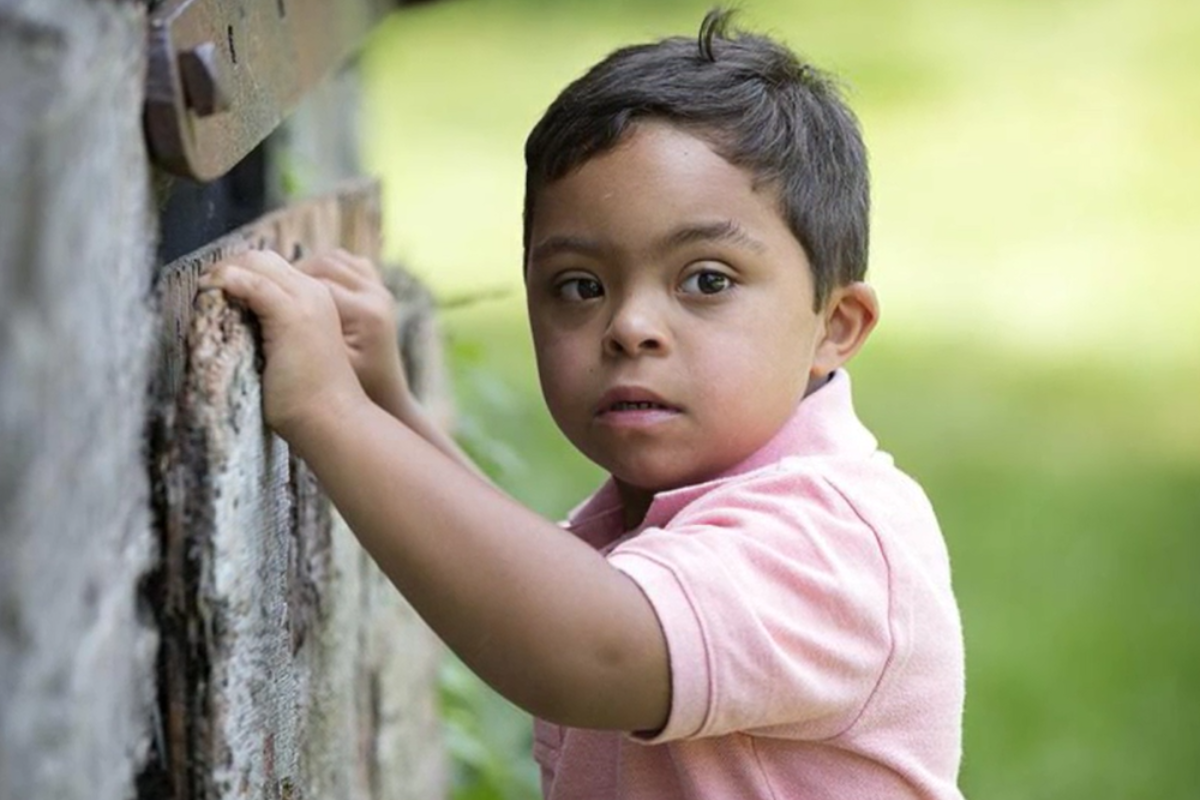 Charlie Hernandez, who was born with Down syndrome and diagnosed with autism, inspired his mother to launch a clothing line to create awareness. (Photo supplied by Anna Hernandez)

At six years old, Charlie Hernandez is learning his numbers and letters. He idolizes his father and is obsessed with trains and organizing his toys. Charlie is a typical little boy, who happens to have special needs, says his mother, Anna Hernandez. He’s also the inspiration for Charlie’s Project, a clothing company built around leggings founded by Hernandez in 2012 with a mission to raise awareness for the conditions that affect her son: Down syndrome and Autism.

“He’s six but very much like a two-year-old,” the 42-year-old Hernandez told Latino USA about Charlie, who is non-verbal. “It used to bother me when I saw that his younger cousin was walking and talking and potty trained, and Charlie wasn’t doing any of those things, but not anymore.”

When Charlie was born, Hernandez admitted that she didn’t know much about Down syndrome and had little experience with the special needs community. The first years were hard, but she and her Dominican-born husband focused on learning how to care for their son’s needs, even rearranging their work schedules so that one parent was with Charlie during every hour of the day while the other slept or worked.

“His first words were ‘no’ and ‘papi,’” said Hernandez, who is of Polish descent and lives right outside of Boston with her family. “He’s never said ‘mom.’ And that doesn’t bother me. He idolizes his dad, because his dad was home with him during the day for three years. Charlie learned to walk and eat because his dad worked with him to strengthen his legs and muscles and coordination.”

As Charlie grows, he isn’t the only one learning. Hernandez said she has realized that seemingly simple acts like dressing her son have taught her about the significance of sensory issues.

“Yes, he has sensory issues with clothing and other textures. Charlie needed soft clothing that was expandable,” she noted. Seeing a need and understanding that Charlie would not be the only to benefit from this type of clothing, Hernandez decide to invest a combination of savings and loans into the business she named for her son. Hernandez drew from her background in design. starting with girls dresses and autism leggings before expanding to what she refers to as whimsical leggings—tops and dresses for adults and kids. The fabric used for her clothing line is “Charlie-approved,” soft enough to make him smile when he snuggles into his mother’s arms and just right to layer under his jeans and shirts.

“We first noticed that Charlie loved the feel of my pantyhose, and now he loves his leggings,” Hernandez said, adding that Charlie’s Project will soon be going tagless to make them even more sensory-friendly. “In fact, we have many clients with children, many of them boys, with sensory issues who only wear our leggings, too.”

Charlie’s Project follows an affiliate selling model, where people who want to sell the company’s products don’t have to worry about carrying merchandise. Instead, affiliates share links to the website and maintain a Facebook group, receiving a percentage of each sale.

“This makes more sense to me as a special needs mom. It doesn’t take away from family time or require an investment,” Hernandez said.

Her company also tries to give back. Hernandez said that 28 percent of profits were donated to charities and organizations. The company also sponsored 11 children in Haiti.

Most of the ladies who work with Hernandez are parents of special needs children. It wasn’t something she planned—just how it all worked out.

“So we all understand each other,” she added.

Perhaps it is this shared connection that has inspired the community that has built itself around Charlie’s Project and the little boy who inspired his mother to launch a business. Hernandez doesn’t have to explain the significance of each milestone made or why it means so much because people just know.

“He’s made huge steps socially this year. Huge. He used to hide under table or cling to me at birthday parties but not anymore,” Hernandez said. “I see other kids and what they can do but none of it bothers me now. Charlie will get there on his own time.”