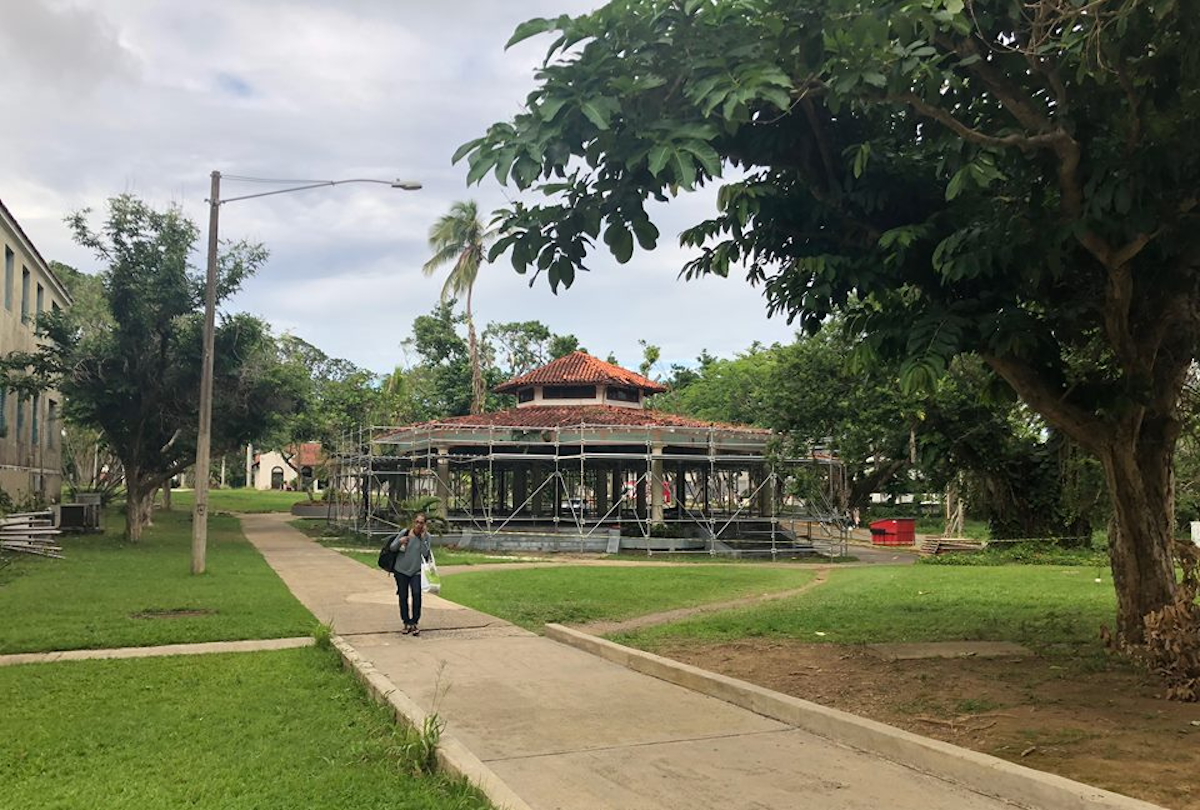 Following Hurricanes Irma and María, students at the University of Puerto Rico at Río Piedras can expect to end their fall semester this March. (Photo by Claudia Irizarry Aponte/Latino USA)

RÍO PIEDRAS, PUERTO RICO — While students across the country gear up to begin their spring semester, many university students in Puerto Rico are still lagging in the middle of their fall semester, after having to take a forced weeks-long (or even months-long) recess after Hurricane María struck the island on September 20 last year.

The effects of this ongoing semester in Puerto Rico, now in its sixth month, has been agonizing for some students.

“I lost motivation to keep on studying, looking at the condition the country was left after María,” Felicia López Segarra, a sophomore who studies foreign languages the University of Puerto Rico in Río Piedras (UPRRP), told Latino USA. “It was hard to move on and do things and be productive.”

López Segarra, a resident of Trujillo Alto, a town just southeast of San Juan, didn’t have power in her home until January 8.

The UPRRP, with an enrollment of about 18,000 students and the largest of the UPR system’s 11 campuses, has had its academic calendar rescheduled twice since the fall semester began in early September—first after Hurricane Irma and then after María. The current semester is now expected to end the first week on March. The spring semester will begin shortly after, following a 10-day recess.

Meanwhile, at the University of Puerto Rico at Mayagüez (UPRM) on the island’s west coast, the spring semester begins on February 14.

Mental health experts agree that continuing routine activities, like going back to school or work, are essential to post-trauma recovery. However, some say it’s not surprising that students feel overwhelmed with an irregular schedule. Dr. Minoshka Liquet, a clinical psychologist and an adjunct professor at Albizu University, explained that lack of flexibility may exacerbate feelings of distress. “You basically have all of your demands without the tools to complete them,” she said.

Dr. Von Marie Rodríguez, a Postdoctoral Research Fellow at Brown University who specializes in post-trauma adjustment and recently published a paper titled “Puerto Rico se levanta: Resilience in times of disaster,” agreed. “It is difficult to say for sure what would be the consequences to the person’s mental health if forced to continue with a routine.” Ultimately, people who have experienced a traumatic event, like the hurricane, “should take the time to analyze what they need, emotionally and physically, to continue with a healthy life.”

Ana Marrero, a sophomore majoring in English at the UPRM, faced that decision. Like many on the island, she considered leaving though ultimately decided to stay. “I realized that there were people who have it worse than me,” she explained. “I still have a roof over my head, and my family and I are safe.” She still doesn’t have power in her home town of Vega Baja, but she does have power at her off-campus housing in Mayagüez.

The University of Puerto Rico system, which has an overall enrollment of approximately 57,000 students, suffered extensive damage from Irma and María, estimated at $118 million across all 11 campuses. As of November, the damage to the main UPRRP campus is estimated at over $40 million, according to an official document issued by interim Chancellor, Dr. Luis Ferrao Santiago.

A curfew is in effect in many UPRRP buildings, with campus authorities citing safety concerns. In the campus’ School of Architecture, all students and faculty must leave the facilities by 7:30pm. For those who still do not have power at home, this makes studying and completing assignments much more challenging.

“I already have power,” explains Alejandro Jahiatt Pérez, a Master’s of Architecture candidate at the UPRRP, “but when I didn’t, sometimes I had to go to the mall and use the wifi there.” He got power back in his home in Río Piedras in late November, about a month into the resumed semester.

During those long weeks after the hurricane and before classes resumed, many students were still shrouded in uncertainty for their future. Jahiatt Pérez described the feeling as a “limbo,” and said he experienced a serious mental distress for the first time in his life in that period.

“At that point, I had no idea where my career was headed, with a year left to go in my master’s” he said. “But there is also a limbo in a personal sense. Are we, as an island, going to be okay? What is going to happen, economically?”

López Segarra, on the other hand, has other plans. “I really hope nothing [like the hurricane] happens so I can finish my degree and get out of the island. Because I don’t think there is any opportunity for me or young people in the island.”

Four months after María, conditions on the island are far from back to normal. While the island’s electrical grid system is generating power at 82 percent capacity, about 68 percent of citizens have power in their homes. Meanwhile, there is still a minor population —about 7 percent of the population— without access to running water. According to the Florida State Emergency Response team, as of January 4, over 297,000 Puerto Ricans have arrived in that state alone.