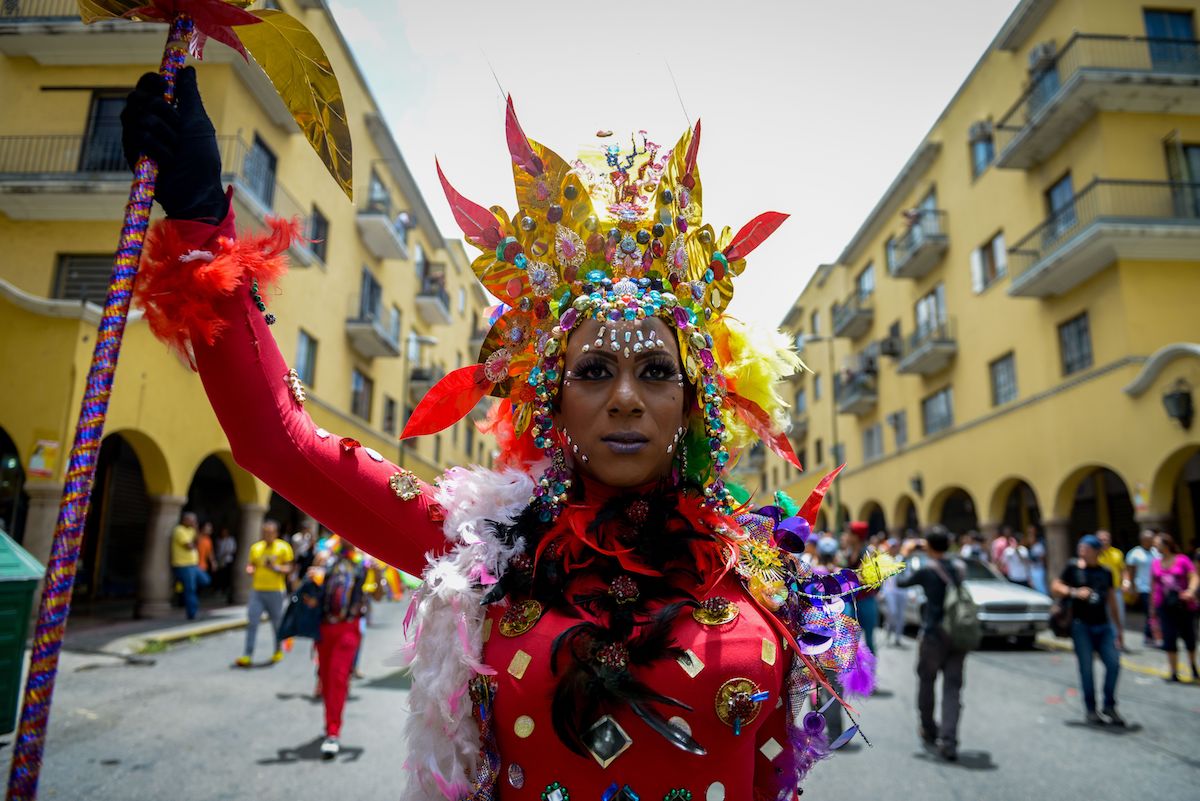 A photo from the Gay Pride Parade in Caracas on July 12, 2015 (FEDERICO PARRA/AFP/Getty Images)

CARACAS — While Venezuela continues to face an economic crisis in the midst of more political power struggles, many Venezuelans consider LGBTQ rights to be irrelevant.

Even in the most dire conditions, non-straight, non-cisgender people feel they are still treated like second-class citizens. Lacking resources, structure, as well as support from most politicians, organizations such as Venezuela Igualitaria, Reflejos de Venezuela and Unión Afirmativa manage to continue going, no small thanks to help from volunteers.

José Manuel Simons is one of them.

“Despite having won the case for parental rights, we continue without legal protection for couples, no civil unions nor same-sex marriages, and less so, anything related to gender identity,” Simons told Latino USA.

Currently living in Chile, Simons is a lawyer and activist heading up the legal process for gender recognition at Venezuela’s Supreme Court.

Simons is no stranger to these fights. Helping with Venezuela Igualitaria, he recalls the uphill battle to get same-sex marriage discussed by the National Assembly, the country’s unicameral legislature.

“The same-sex civic marriage bill was shelved. In the middle of this political conflict, nobody has cared to start the debate, and many even call it as a waste of time,” Simons added.

Elected in December of 2015, the opposition-led legislature was seen by many as a change agent for Venezuela, including the LGBTQ population. Among those elected was lawyer and activist Tamara Adrián, who at the time was the second transgender person to become a legislator in the Americas.

But the Venezuelan opposition is a heterogeneous group, made up of parties from the left, center and right. Such a topic as same-sex marriage didn’t sit well with some. Now with the National Assembly declared in contempt by the country’s Supreme Court, the prospects to pass any type of marriage bill are virtually impossible, according to Simons.

“Even if it got approved, it wouldn’t be applied,” he said. Attempts to go through the Supreme Court have been met with indifference and neglect from authorities.

Like everything else in Venezuela, LGBTQ rights were addressed during the Bolivarian Revolution, started by Hugo Chávez in 1999. For many years, local government institutions allied to chavismo promoted grassroots groups and activities, including backing the Caracas Pride Parade, which has been held since 2000.

However, in the past few years, the same political divisions that affected Venezuelan society started to hit the LGBTQ movement. Since 2014, two different parades have been going on. Some, like lesbian activist and college professor Quiteria Franco, blame this to the exclusive attitude in pro-chavista organizations.

In a message posted on her blog last year, she wrote: “The LGBTQ Pride Parade must be filled with political content demanding rights and keeping distance from party preferences. The political parties can assist and support the parade, but never be protagonists of these civic society activities.”

For his part, Simons believes that neither the government or the opposition is willing to address LGBTQ rights.

“Both political factions in Venezuela have plenty of ignorance and conservatism about the subject,” Simons explained. “There’s not one politician taking up the banner for our rights. Not from the so-called inclusive and revolutionary left, nor from so-called activist deputies.”

But Simons is still committed to his fight, even from afar. In a case where five transgender persons are demanding their right to change their name and gender, he has great hope for a positive Supreme Court ruling, noting that less than a year has passed since the case was heard, and now Simons is waiting for a verdict.

“Though we’re waiting for a ruling in favor, we can’t tell how much ‘in favor’ it will be,” he said.

Meanwhile, in probably the biggest contradiction about Venezuelan society, there has been a boom of LGBT cinema coming from the country. Award-winning movies like Pelo Malo, Azul y No Tan Rosa, and Desde Allá have showcased a different face of Venezuela that rarely gets reported in mainstream U.S. media.

“Venezuela is ready, there’s no doubt about it, but it’s the politicians who still live in the past,” Simons explained.

For most people, it’s hard to picture how Venezuela will recover from its present state. But for Venezuelans like Simons, Franco and other LGBT activists, it’s all about small victories.