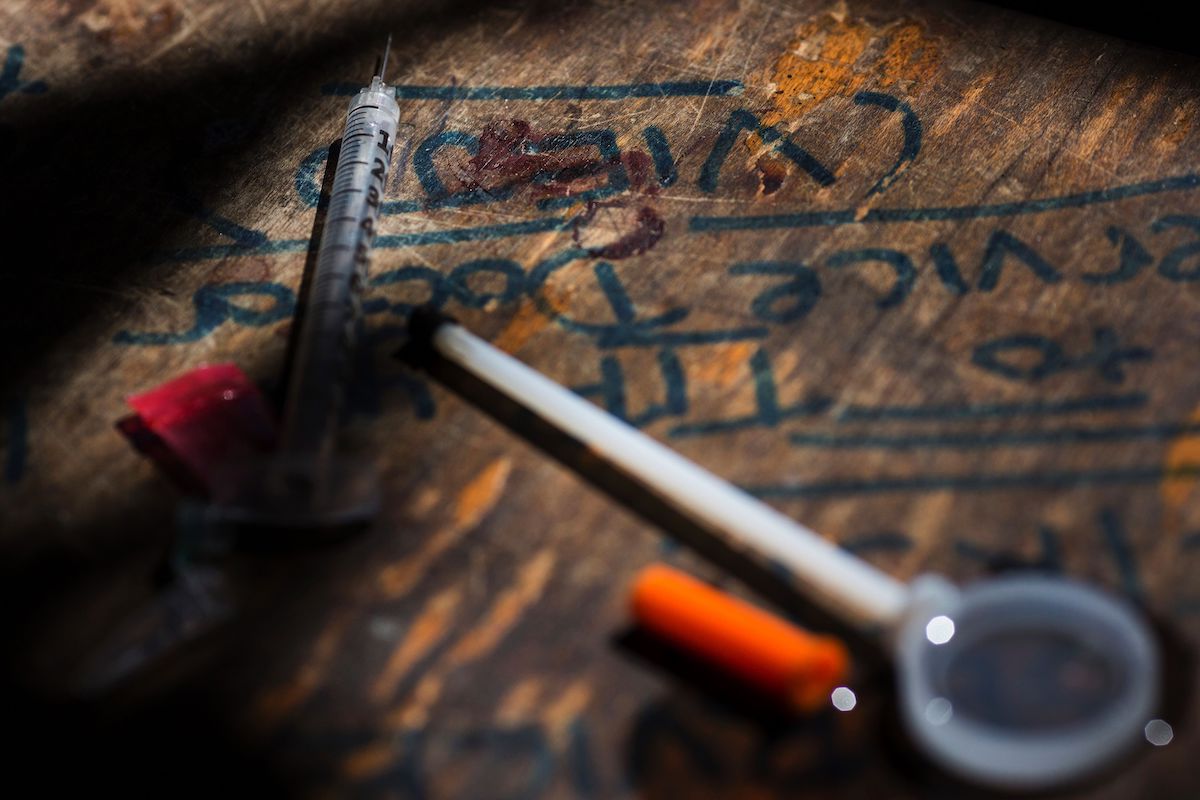 If you spend enough time frequenting the parts of South Bronx where drug users congregate, you’re liable to come across Tino Fuentes. Usually, he’s on a mission to find out who’s carrying the strongest heroin in the neighborhood and then getting his hands on it.

“All dope bags have a stamp on it—the brand,” he says.

But Fuentes isn’t interested in getting high himself, at least, not these days anyway. While he used to sell and take heroin regularly, now he’s an advocate for drug users. And he’s interested in testing drugs out for other people. That’s because ever since fentanyl —a powerful synthetic opioid— entered the supply, drugs in the South Bronx have become more dangerous. Armed with a specially balanced pH strip, Fuentes can find out which batches are possibly deadly to get the word out.

Even if he’s not doing the dope himself, Fuentes is putting himself out there on the line. Just because he’s not shooting up the drugs himself doesn’t make this any less illegal to handle them than if he was. But that doesn’t deter him.

“You know drug users mean a lot to me,” Fuentes said. “I’d rather get arrested than see somebody dead.”

Fentanyl is a potent synthetic opioid—50 to 100 times stronger than pure heroin. It’s administered to millions of Americans routinely for surgery and pain patients. If you’ve ever had a colonoscopy, you’ve probably had fentanyl. But when drug suppliers mix it into the heroin supply, its consequences can be deadly. It entered New York City’s drug supply in a big way in 2015.

According to the city’s Department of Health, it is this fentanyl that’s driving the massive surge in overdose deaths. And it’s not just New York City. Deaths involving fentanyl and other synthetic opioids rose from rose across the country.

This is compounding the nationwide overdose epidemic.

More Americans died from drug overdose in 2016 than in the entire Vietnam War. But in the Bronx, opioid deaths are kind of old news. And for this neighborhood, which is 90 percent black and Latino, opioid deaths are something they’ve seen since at least the 1960s, before there was national attention that there is now, and with little institutional support.

Over the years, it’s been people like Fuentes who’ve taken matters into their own hands and worked to reduce their communities’ opioid related deaths. To mitigate the bodycount, the city and the medical establishment are introducing tactics that were proved effective on the streets. Needle exchange, safe injection kits, naloxone for non-medical professionals, and now fentanyl testing—these techniques fall under a strategy often called “harm reduction.” It’s a set of philosophy and practices designed by drug users and advocates as a way to keep people alive when the state either didn’t know what to do or had given up on them.

In the United States, harm reduction flourished in places like the South Bronx out of necessity.

But as the city invests money into harm reduction centers and naloxone —the opioid overdose antidote—
it also commits more money to policing. As a result, Fuentes worries that some of the most down-and-out drug users are being bullied by city instead of helped. He believes the fall-out is potentially deadly.

“Nobody deserves to die or be treated like shit because they use drugs,” says Fuentes.

On this episode of Latino USA, reporters Stephanie Daniels and Michael O’Brien take us into a heroin users’ hangout called “The Hole,” where Fuentes is hoping to save lives in danger from fentanyl use.

EDITOR’S NOTE: We’ve put together a list of resources and informational websites for those who are struggling or have a loved one who is struggling with drug addiction. Under Resources you’ll find links to hotlines, treatment programs, and overdose prevention tools. Under Additional Information are several articles for those who are hoping to understand addiction, prevention, and opioid addiction on a national scale.

Additional Information
Center for Disease Control and Prevention, Understanding the Epidemic
National Institute on Drug Abuse
What Science Says To Do If Your Loved One Has An Opioid Addiction
5 Tips for Family and Friends of An Opiate Addict

This journalism project was made possible by a fellowship from The GroundTruth Project and a fellowship from the Marguerite Casey Foundation, which supports low-income families in strengthening their voice and mobilizing their communities to achieve a more just and equitable society for all. This reporting was made possible in part by funds granted by the Charles H. Revson Foundation. The statements made and the views expressed are solely the responsibility of the authors.