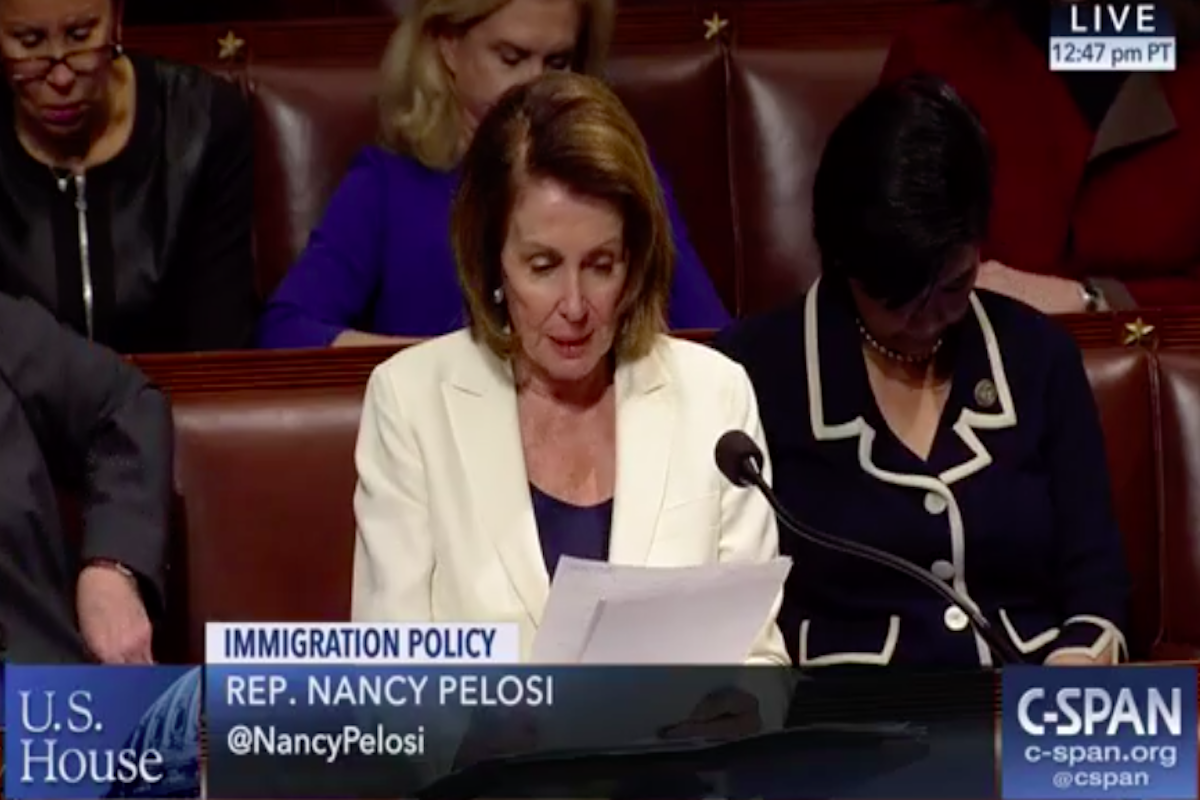 On Wednesday, House Minority Leader Nancy Pelosi (D-CA) took the House floor for over five hours to demand Speaker Paul Ryan (R-WI) to hold a vote on a legislative fix on DACA. As of 4pmET, she was still speaking.

“I have no intention of yielding back, Mr. Speaker,” she said. “I have a lot more.”

The House was set to debate the Mortgage Choice Act Wednesday morning, but Pelosi called the debate “a complete waste of time” shortly after she took the floor at 10am to begin her filibuster.

“Every day patriotic Dreamers lose their status. Every day the American Dream slips further out of their reach. As members of Congress we have a moral responsibility to act now to protect Dreamers, who are the pride of our nation, and are American in every way except on paper.”

She has been sharing their stories ever since.

“During the night when I was thinking and praying so hard about our Dreamers, I thought, maybe we should just pray all day on the floor of Congress,” she said.

Although filibusters occur in the Senate and not the House, where Representatives are only allowed to speak for one minute, both Speaker Ryan and Pelosi can use their leadership status to speak for as long as they want.

“I’m going to speak as long as my ‘leadership minute’ allows,” she said.

This comes the morning after the House voted 245-182 in favor of a short-term funding measure which would fund the federal government through 2019. The multi-billion dollar budget would increase military and domestic spending and potentially includes disaster relief package for areas affected by natural disasters in 2017.

Senate leadership reached a bipartisan deal on Wednesday but House Republicans might not approve the Senate deal, suggesting that the government would shut down for the second time this year if a budget deal doesn’t pass the Senate and the House by Thursday night, and Pelosi still wants to see immigration addressed in any deal.

Only eight Republicans voted against the House budget bill last night, including Rep. Ileana Ros-Lehtinen (FL), Rep. Carlos Curbelo (FL), and Rep. Raúl Labrador (ID). Both Ros-Lehtinen and Curbelo said that they opposed the budget bill because there is still no legislative fix for Dreamers.

I again voted no on the Continuing Resolution because we have yet to debate and vote on a bill that would provide legal status to our DREAMers. I remain committed in keeping my pledge to vote no on any funding bill until Congressional leadership brings a DREAMers fix to the floor

In a statement released Tuesday night, Rep. Curbelo said that he is “not comfortable” with extending the funding deadline past March 5 unless an agreement on immigration is met. “Doing so would relieve the pressure, and we must keep the pressure on.”

In a White House meeting on Tuesday about MS-13, President Trump said that he supports a government shutdown if Democrats don’t agree on stricter immigration laws.”

“We’ll do a shutdown and it’s worth it for our country. I’d love to see a shutdown if we don’t get this stuff taken care of.”