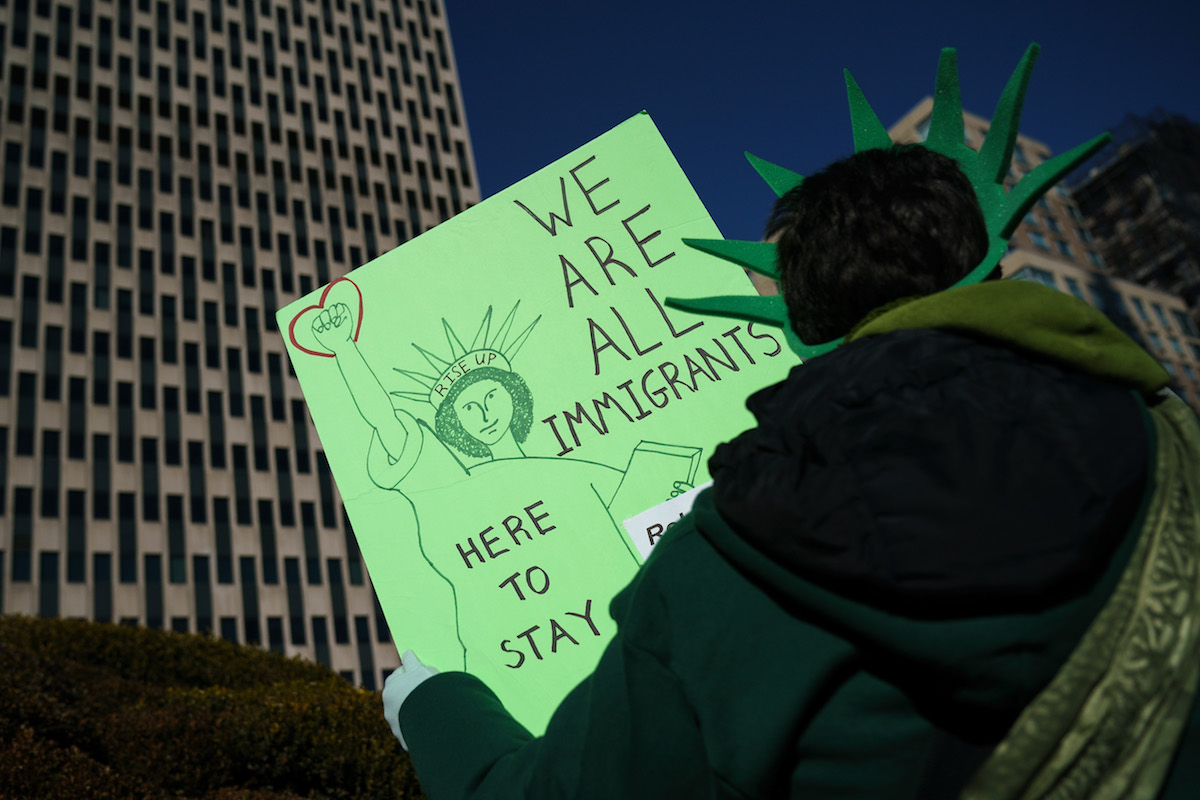 Immigration activists and clergy members participate in a silent prayer walk in protest against the Trump administration's immigration policies outside the U.S. Citizenship and Immigration Services offices in New York City on January 18. (Drew Angerer/Getty Images)

By Carrie Tirado Bramen, University at Buffalo, The State University of New York

Toward the beginning of my new book “American Niceness: A Cultural History,” I recount Cuban writer José Martí’s 1894 essay “The Truth About the United States.”

In it, he argues that polarities shape all nations, the United States included. There are “generous Saxons” and “generous Latins,” as well as egotistical and cruel ones. Consequently, history is an ongoing duel between generosity and greed, he says.

In his 1869 comic sketch “The Personal Habits of the Siamese Twins,” Mark Twain used the metaphor of conjoined twins to describe the duality of the country’s character. One is belligerent, aggressive, and fought for the Confederacy; the other is angelic, amiable, and fought for the Union.

Both writers describe two competing national types: the vulgar American (later known as the “Ugly American”) and what could be described as the “nice American.” Since the early 19th century, the pairing of the nice with the nasty has encapsulated the contradictions at the nation’s core.

Today, the topic that brings this duality into sharp relief is immigration—and especially the polarized national debate on the fate of nearly 800,000 young immigrants in the Deferred Action for Childhood Arrivals program.

The nice and nasty side of U.S. immigration policy is not only seen in terms of this polarized debate, but also in the split personality of President Trump himself. The same day in September 2017 when he decided to suspend DACA, he announced, “I have a love for these people.”

Twain’s conjoined twins are an apt metaphor to describe the Jekyll and Hyde history of U.S. immigration policy.

Is the U.S. a nation of immigrants? Or is it a nation that shuts out, expels and criminalizes immigrants through walls, surveillance and deportation?

This tension between hospitality and exclusion has defined the nation from its beginning. The origin of American niceness occurred three months after the Pilgrims arrived in Plymouth, when an Abenaki named Samoset greeted the strangers in English by saying “Welcome, Englishmen.”

The desperate Puritans had witnessed nearly half of their group die. Concerned about their own survival and safety, they were anxious to establish friendly relations with the natives, and they showered them with gifts. The Puritans quickly signed a peace treaty with the chief sachem, Massasoit, and the Native Americans taught them how to grow corn and catch eel.

But as the Puritans grew in strength and their settlements expanded, they no longer needed Indian hospitality. They eventually killed Massasoit’s son Metacom in King Philip’s War, put his head on a spike and took it to Plymouth, where it remained for over 20 years.

This origin story of the nation illustrates the complexity of American niceness, which appears here in two competing forms: Native American hospitality toward the stranger, and the mercenary “niceness” of the Puritan settlers.

The tension between these two opposing forms can be traced etymologically in the word “hospitality,” which derives from the Latin root “hostis”—the same root of the word “hostility.”

From Indian Hospitality to Nativist Hostility

This tension between hospitality and hostility surfaced again during the first major wave of migration to the United States in the 1830s and 1840s, which consisted primarily of Irish and German immigrants.

Following the Panic of 1837 and a subsequent recession, jobs were scarce. This —combined with anti-Catholic sentiment and fears that Rome would undermine republicanism— resulted in a nativist movement that aimed to curtail suffrage for immigrant men while stopping the “foreign invasion.”

This nativist rage —which blamed Europe for sending their crime-ridden and poor masses to the United States— crystallized into the Know-Nothing Party of the 1850s, whose slogan was “Americans should rule America.”

An anonymous 1844 article in the anti-slavery newspaper The Pennsylvania Freeman referred to nativism as a “narrow spirit of selfish patriotism” that portrayed foreigners as “intruders.” According to the article’s author, such toxic patriotism would only lead to a situation where hatred would “beget more hatred.”

In 1855, Abraham Lincoln identified the connection between nativism and racism.

“I am not a Know-Nothing,” he wrote to his close friend Joshua Speed. “That is certain.” Lincoln noted that if the Know-Nothings got control of the government, the Declaration of Independence would read “all men are created equal, except negroes, and foreigners, and catholics (sic).”

The Battle Over American Identity

In his 1984 book “Send These to Me,” immigration historian John Higham observed that many of these nativist feelings persisted in 20th-century America. He noted that the only thing that seems to change is the level of emotional intensity.

What struck him was how quickly mild indifference toward immigrants could morph into xenophobic fury. Although Higham’s claim was made nearly 20 years before the 9/11 attacks, it nonetheless describes what happened to Muslims in the U.S.

Today, we see both aspects of American character on display in the deserts from California to Texas, where undocumented immigrants risk their lives to cross into the United States. While some Americans fill water stations, others —from ICE agents to armed civilian militias— will empty them.

Scott Warren, who works with the Tucson-based aid group No More Deaths, was arrested in January and charged with harboring two undocumented migrants in a humanitarian aid outpost, where they were given water and fed.

In a recent article, journalist Charles Pierce wondered, “It’s a felony to leave water for thirsty people? This is not America.”

As Congress debates the future of DACA recipients, the meaning of this word —America— continues to be a point of conflict.

The outcome of this conflict depends on which legacy of American niceness the nation wants to honor. Is it the unconditional and accepting niceness exemplified by Native American hospitality? Or the self-interested niceness of the Puritan Separatists that evolved into nativist exclusion?

At stake is not only the fate of the Dreamers, but also how the country and the rest of the world understands the idea of America.