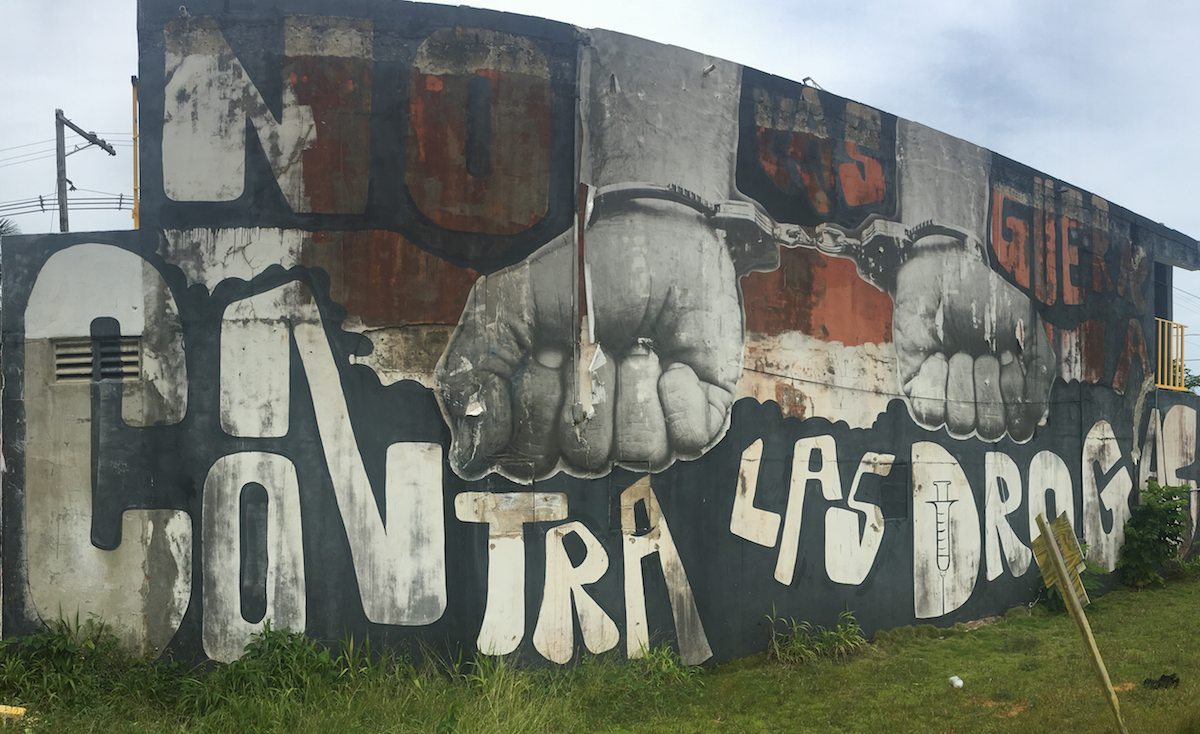 The iconic mural on the back wall of Intercambios Puerto Rico, taken before Hurricane María. 150-mph winds have since peeled most of the finished surface off, but the building remained mostly intact. (Photo by Joaquín Cotler)

The cheap, synthetic opioid associated with the recent spike in overdose deaths in the United States is peppered throughout the island’s drug supply, usually disguised as heroin. Because of its strength, fentanyl can be fatal even to seasoned opioid users, especially if they use it unwittingly. Overdose prevention specialists on the island agree that drug policy reform (starting with a national overdose prevention plan and an island-wide government-sponsored grassroots naloxone campaign) is the only safe way to protect drug users from dying accidentally. Puerto Rico’s lawmakers have yet to adopt that philosophy—despite the drug’s efficacy in saving lives.

When taken nasally or injected, naloxone, also known by its brand name Narcan, has been proven to save lives by stopping overdoses in progress. While it’s technically legal in Puerto Rico, the drug is relatively restricted. It’s available by prescription, and generally only to drug users for personal use. Emergency workers in possession of Narcan can use the antidote to save a life (and drug users can theoretically self-administer it), but family, friends and other drug users —often the real “first responders” in an overdose situation— are not legally protected.

Rafael A. Torruella is an overdose prevention specialist working to save drug users’ lives. He is the founder of the Fajardo-based needle exchange Intercambios Puerto Rico, which employs several current and former drug users as outreach workers. Torruella and his staff provide basic public health and harm reduction services like sterile needles, personal hygiene or “dignity” kits, and community naloxone training. Since Hurricane María, Intercambios has been testing used injection equipment for fentanyl, and Torruella says he’s seen an increase in overdoses.

Still, despite the work on the front lines of the crisis, community organizations like Intercambios are not legally permitted to hand out naloxone to the community. Torruella says this needs to change.

“If the government right now passes a law that institutes overdose prevention and naloxone distribution all around Puerto Rico, the death rate of overdoses will drop,” Torruella told Latino USA. “It needs to be distributed by syringe exchanges, not just by medical facilities, not just by law enforcement. I don’t know why they’re not doing this.”

The law Torruella mentions is already on the table. Officially called PS 341, the bill was  co-sponsored by advocate-turned-senator Dr. José A. Vargas Vidot back in early 2017, shortly after he took office. It would allow non-governmental organizations like Intercambios to distribute naloxone to anyone from the community. It also calls for the creation and implementation of a comprehensive island-wide overdose prevention program.

The problem is, while PS 341 was unanimously passed by the Puerto Rican Senate last April, it’s been stalled in the lower House for months, “pending further review.”

“They know what they can do to help us save lives. They’re just not doing it,” said Alexandra Rodríguez Romero from the harm reduction center El Punto en la Montaña. She has been working with El Punto to educate several local police departments and mayors about the importance of Narcan, and implores the House to vote on 341.

“We want Narcan to be legal for every non-profit organization who has contact with people dying in the streets,” she added.

According to Rodríguez Romero, fentanyl overdoses in the greater Caguas area have picked up since María. El Punto’s outreach workers, who travel by truck from urban to rural areas, see between two and three fentanyl-related overdoses per week in each of the communities they serve: Aguas Buenas, Caguas, Cayey, Cidra, and Comerío.

Intercambios Puerto Rico conducted their own fentanyl tests in from October through January. Carla Correa Cepeda, the test’s administrative coordinator, says that during the storm, drug users were likely reusing equipment tainted with fentanyl.

“The drugs are being cut here in Puerto Rico,” Correa Cepeda said. “They’re coming from Mexico, Colombia, Santo Domingo, and headed to the USA. Fentanyl is extremely dangerous for the people. If we want to save lives, we need to regulate the market so we know what drugs people are using.”

Intercambios found that after María, between 77 and 90 percent of the injection equipment screened in Canóvanas, Humacao, Fajardo, Loíza, Naguabo and Río Grande had come in contact with the powerful synthetic–despite users’ beliefs that they were using heroin.

“Fentanyl is here. It’s all around us,” Torruella noted.

“It is an emergency,” Rodríguez Romero said.

Despite stating that the threat of overdose death “does not constitute an emergency” in Puerto Rico, governor Ricardo Rosselló recognized National Overdose Awareness Day last August by introducing an interagency opioid overdose prevention task force. Made up of representatives from several government entities, including the Substance Abuse and Mental Health Services of Puerto Rico (ASSMCA), the Department of Correction and Rehabilitation, the Department of Health, the Department of Public Safety and the Institute of Forensic Sciences, the task force will be rounded out by representatives from two unnamed non-governmental agencies that work with addiction.

ASSMCA project manager and spokesperson Cieni Rodríguez says they have yet to reach an agreement with either of the NGOs they plan to bring onboard. At the same time, she recognizes important role harm reduction and community-based organizations are already playing in saving lives.

“El Punto en la Montaña, Intercambios Puerto Rico… we approached Guarabi in Vega Baja and Iniciativa Comunitaria. We have been talking to all of them,” Rodríguez said. “We have conversations so they can be part of our effort, even though they are already doing their efforts now. I can tell you for example that El Punto en la Montaña and Intercambios Puerto Rico are working on overdose prevention.”

But Rodríguez Romero and Toruella aren’t sure what their role is with the interagency group. Though Rodríguez Romero has worked closely with ASSMCA in the past and attended the August 31 signing, she says El Punto hasn’t been contacted by anyone representing the task force since before its inception.

“We don’t actually know who will be on the task force,” she said. “They called me the day of the executive order and invited El Punto to witness the announcement, but I haven’t heard from anyone representing them since.”

Toruella said he was contacted by ASSMCA and asked to participate in a naloxone training program this coming April, though he says the role the task force will play in that is unclear. Cieni Rodríguez says that this is part of the plan: training 500 first responders throughout the island to use Narcan—in the same manner that Intercambios and El Punto are already doing in their communities.

Rodríguez also said that while the Narcan will be provided by the government, community organizations still won’t be able to give it out, but she says they’re working on that too.

“The bill is still in the House, but we are trying to work with the Department Of Justice to see what are their main concerns so we can still pass it,” Rodríguez said. “Some legislators thought that a part of the bill was going to protect drug dealers. That’s something we’ve been going back and forth with.”

But she feels that “good samaritan” provisions built into PS 341 shouldn’t prevent the bill passing. “That’s why we say it’s a matter of saving lives, not protecting x or y,” Rodríguez said.

In addition to Narcan saturation, PS 341 could potentially open the door for decriminalization, government-sponsored harm reduction, regulated drug distribution, and expanded medically-assisted treatment programs. Senator Vargas Vidot, the founder of the San Juan harm reduction center Iniciativa Comunitaria and one of the co-sponsors of the bill, has been working to develop a public health plan that he hopes will address the exacerbating biological, sociological and psychological factors of substance abuse—not just the symptoms.

“The problem is that in Puerto Rico there doesn’t exist a standard.  The national plan would help establish that here in Puerto Rico. Treatment won’t be based on intuition, It will be based on science,” said Vargas Vidot. “This is a great, enormous step.”

According to a study published by Intercambios in 2015, most inpatient treatment facilities licensed by ASSMCA and receiving money from the Puerto Rican government are faith-based programs like Hogar CREA, which operate without thorough qualitative evaluation. Most don’t provide long-term mental health services or employ enough case workers to address the underlying causes of substance abuse.

“Sixty three percent of those who enter my clinic after evaluation are found to have coexisting dual diagnoses, like bipolar, anxiety, severe depression,” said Vargas Vidot, whose organization provides free health care to problematic drug users in Puerto Rico. “The addiction is not the main problem. That’s how they deal with the main problem. That’s what we have to work on. We are only treating the symptoms and not the root of the problem.”

“This issue has to be elevated to a much higher plane, much more politically powerful, and must be able to establish public buy in,” he said.

Despite lacking the support they need from the Puerto Rican government, Vargas Vidot, Rodríguez Romero, Torruella and the island’s harm reduction community remain vigilant in their work.

“We were the ones out here helping our people before María, we’re the ones out here after,” Torruella said. “We’ll continue testing the heroin supply for fentanyl and educating the public. We can only hope naloxone keeps finding its way into the community somehow.”